Literally thousands of drivers have started a Targa event since the first one in 1995. But Lowe and Kirk-Burnnand are the only two who have started - and perhaps more importantly finished - all 19 to date.

"That's the key, isn't it?" says Lowe, the man who drives one of the six-day annual event's most diminutive and distinctive cars, an Enzed-backed 1963 Fiat Abarth 1000

"Persistence. Never, ever, give up. One bad stage or two does not mean you pack up and go home….finishing is the goal."

Lowe, now 55,  moved to New Zealand from his native Australia in 1993 and signed up to do the inaugural Targa New Zealand event in 1995 with mate Steve Cannon in the co-driver's seat of a car Lowe  had bought several years before off a Sydney backstreet as a fun, rebuild project.

Because he was new to New Zealand he didn't know many people in the motorsport community, but that soon changed when, as well as being one of the first drivers to enter the event, he also became the first to crash in it!

Neither he nor Cannon were injured but the car was badly damaged. Someone else might have called it a day at that stage. Not Lowe though, and with the help of members of the Fiat Club Waikato he and Cannon were able to get back into the event and collect their first set of finisher's medals.

That was enough for Cannon, but Lowe was keen for more and with Mal Simmonds taking over as co-driver for the next four years and constant development - in the interests of power, handling and reliability - the results came.

Current co-driver Phil Sutton joined the team in 2000 and in 2003 the pair - and team - claimed their first class win. They struggled with engine issues in the next two events but came back to 'win everything,' in 2006.

Having had 19 years to work it out Lowe says that he, co-driver Phil Sutton and long-time crew members Gary Finemore, Nigel Derbyshire and Dave Jowett now know the car as well as they do - probably better in fact - each other. 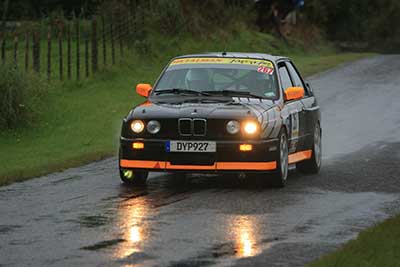 As the other 19-year veteran of the event, Barry Kirk-Burnnand is quick to agree, keeping an older car running at pace over six days is a big ask. And Lowe says it all comes down to one word, satisfaction.

"I was asked with the 20th anniversary event coming up, why didn't we run a faster, modern car and go for outright honours?" says Lowe.

"Well, apart from the obvious cost, I explained that our main motivation is satisfaction. Having a 50-year-old 1000cc car not only finish the event, but beat home over half the field, catching Porsches and the like on the way, gives everyone involved on our team immense satisfaction, a feeling which cannot be repeated with a modern car that is easier to drive and doesn’t break down."

Like Lowe, Kirk-Burnnand, now 63, had a solid grounding in motorsport - in his case in gymkhanas and rallies - but unlike Lowe, who already had the Abarth in his garage in Rotorua, Kirk-Burnnand had to buy a suitable car for the first New Zealand event.

Barry enlisted his Wellington-based brother Chris to co-drive for him that first year, then when Chris bought his own car for the next event, long-time family friend Dave O'Carroll joined him in the Cortina.

The last year they ran the car the pair won the classic class - after finishing second a number of previous times - at which point Barry decided to follow brother Chris' lead and update to a later model BMW M3.

"The older cars need a lot of work to keep them going each night," explains Barry, "and as Dave and I got older ourselves it just became too hard, still being up late at night working on the car."

"With the BMWs you can finish the day, do a quick check and be back at your motel having dinner, they are just so reliable."

Having been one of the pace - and with their choice of cars - agenda-setting crews over 20 years is a huge achievement. Barry's real legacy, however, has been in his ability to draw his extended family into the event.

As well as his brother Chris and nephew Mark, Barry's own sons, Steven and Carl are event regulars.

For several years son Steven took over co-driving duties from Dave O'Carroll in Barry's car before building and driving his own car (a BMW of course), and Carl has been competing himself for a number of years.

Each takes the event as seriously as the other and at any one event there will always be at least three Kirk-Burnnand BMW crews vying for a place in the top three in the Metalman Classic class, and now that Steven is driving a later model BMW 3-series Compact, there is one fighting for a top three spot in the Instra.com 2WD Modern class as well.

So entrenched is the name Kirk-Burnnand at Targa events, in fact, that other entrants have wanted to join the clan and been known to add the name 'Kirk-Burnnand' to the side windows on their own cars!

Like any father, though, Barry is just happy he's got something he can share with his sons.

"I consider myself extremely lucky to have my two boys enjoying what I do. Obviously it gets competitive, but it's always nice that I have been able to be the benchmark for them."

And what of the 21st Targa New Zealand event next year? Or the 22md the year after?

Both Lowe and Kirk-Burnnand admit that they have thought about 'what's next' but at the moment have no reason to stop….though Lowe has hinted that after 80,000km of rallying in the iconic Abarth it might be time to finally follow Barry Kirk-Burnnand's lead and update to a newer, less maintenance-intensive model.

Before he does that though he has created a special trophy and come up with $1000 of his own money for anyone who can beat he and Sutton in the 0-1390cc class in this year's 20th Anniversary event.

"When I  started, and even when Phil came on board in 2000, there were a whole bunch of small cars competing," says Lowe, "Minis, a Sunbeam Stiletto, even an Escort 1300...a great little car. Since then the numbers have slowly dropped off to the point where we're often the only ones in it (the Category 0 class).

"I said at the prize-giving after last year's event that on behalf of Enzed I would put up a perpetual trophy and that's exactly what I'm doing," says Lowe.

In the 19 years the event has been running it has also relied on the work of thousands of volunteer officials. Hundreds have helped out on several occasions, with a hard-core who have officiated at more than half. But it would appear that only one, Auckland man James Logan, the current clerk of the course, has played a part in all 19 held so far.

"That's right," Logan said this week. I was part of the very first taping team that year and I have been back doing something every year since."

The 20th anniversary Targa South Island event starts at Christchurch's Addington Raceway on Monday October 27 before a prologue stage in the Port Hills and afternoon at Mike Pero Motorsport Park.

On Tuesday the field heads south for stages in mid-Canterbury, before the first of two overnight stays in Dunedin where the cars will be housed overnight in the Forsyth Barr stadium.

After a day full of stages in the North Otago hinterland (and lunch and service stop in Oamaru's historical precinct) on Wednesday the field returns to Dunedin before heading south on Thursday to Invercargill - and a day's end stage at Teretonga Park.

Competitors then spend the final day (Saturday November 01) in the Lakes County with stages to and from Glenorchy and across the Crown Range before the official finish in downtown Queenstown and the prize giving function the next day.