Much loved, and with a wicked sense of humour, Ed Mulligan is an Aussie rallying icon who has now done more rallies than most of us have had hot feeds. A super-quick Escort BDA punter back in the 70s, Mulligan is still competing – in three different cars – more than 40 years on. It was time to catch up on a few Mulligan memories. * * * * * 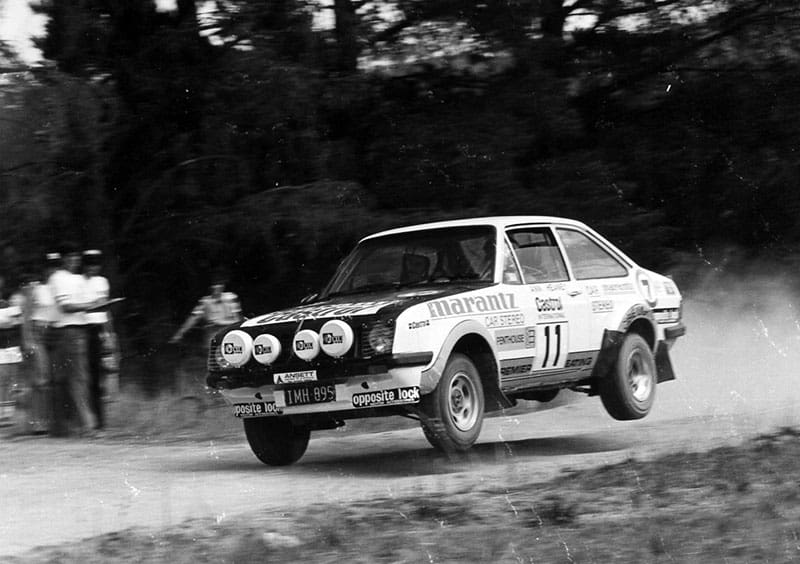 You’ve driven plenty of cars over the years. What have been your favourites? I love rear-wheel drive rally cars. They are the best fun to drive. Firstly, the Escort. It’s the best car to drive and has all the good gear. It runs a 2-litre Cosworth 16 valve, not an alloy BDA. It’s very reliable and has MCAs and is the most satisfying of my three cars to drive. I lend it to Derek Ayson, my Kiwi mate, for the Border Ranges Rally. He loves it and on notes is as quick as Tom Dermody in his Sherwood-engined BDA. Yes, Escorts are the duck’s nuts! Manta V8 (The Pommy Mustang). A unique well-built (in UK) 80s supercar, but with a Rover 3.5 litre in mild tune, rather than a four-cylinder. It’s got bucket loads of torque, a close ratio gearbox and fast power steering with MCAs. It’s a load of fun to drive and reasonably fast, particularly on wider gravel roads. It’s popular with spectators and sounds and looks great when pushed hard. We’ll get around to putting a wrap on it soon, so it will look like a real 80s car. My E30 BMW now lives on the South Island of New Zealand. It was built in Australia by Mark Callinan from Sydney. It suits the NZ roads and has the best sounding six-cylinder injected motor on the planet! I’ve done two seven-day Silver Fern rallies and 10 Otagos, plus Catlins and other events on the South Island. The E30 now has power steering and a better close-ratio gearbox. It’s a joy to drive and as quick as plenty of the Escorts around. It’s easy on tyres as the lower ambient temps in NZ mean you can do a one-day event on a pair of rears. I love it! 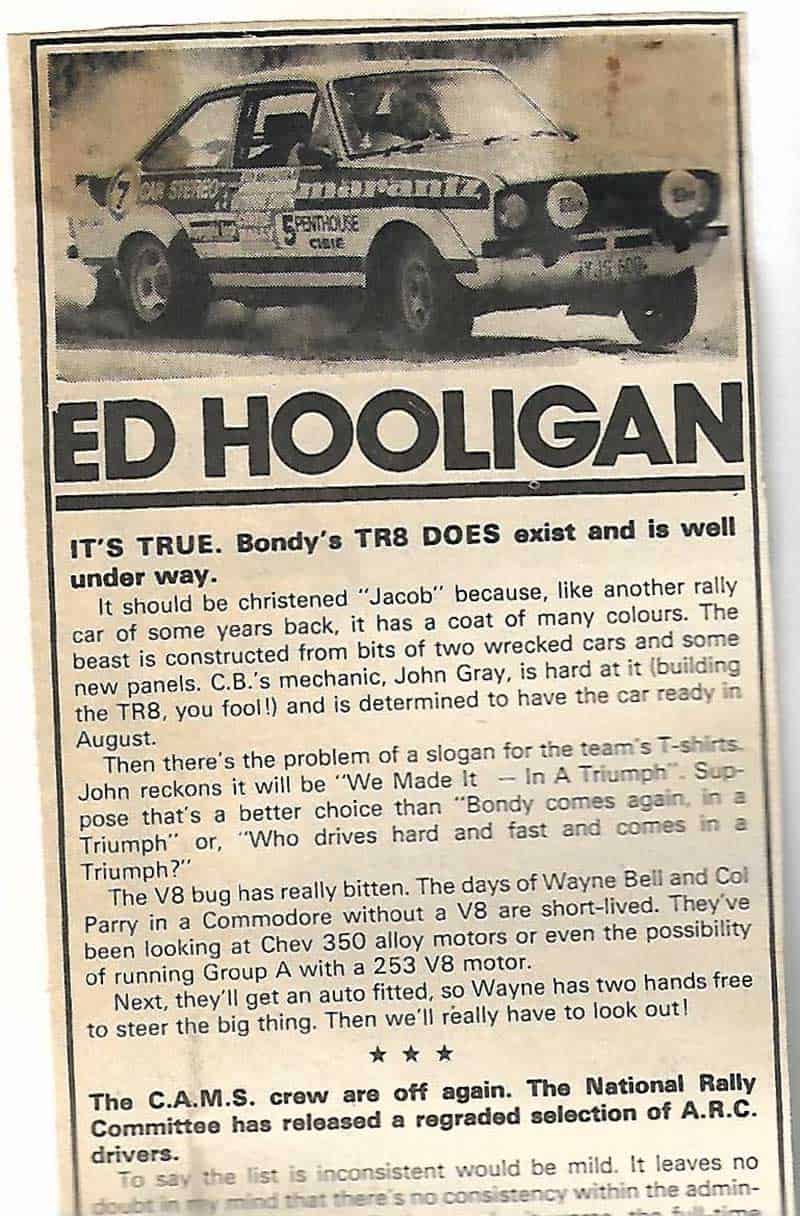 Back in the 70s you were often called Ed Hooligan. How did that come about? It was my nickname as Mulligan was too hard for Aussies to understand! My motto was Hooligan by name and by nature. Pam and I lived in Sydney and were at the centre of a large rally family that had great parties and fun times. Clive Slater, Dunko (Ross Dunkerton) and other lads visited and stayed, along with the country people. Auto Action got me to do a personality column where I commented on all motorsport matters and took the #$%& out of CAMS in the bargain. Opposite Lock was our business and we sold parts to Brocky (Peter Brock), Gossy (John Goss), KB (Kevin Bartlett), and other big-name drivers. The rally family supported Opposite Lock and made it a real success. Ken Block, who I’ve met and competed against in NZ, was a smart fella who 30 years later used the word ‘Hoonigan’, but he is not the original nor the best, like Smiths Crisps! You also handed out plenty of other nicknames to drivers in the 80s. What were a few of them? Now that is something that was an Ed Hooligan feature. Greg Carr was “Rex D Carr”, as the boys in the Ford Team had to repair his BDA on a regular basis as the tacho never worked and he wrecked diffs with some regularity. Dieter (Fred) Gocentas was Freddie the Winch, as I taught him how to use a Tirfor manual winch, which he and Andrew Cowan used to win the first Southern Cross Rally they did together. He was my special mate and we had a great bond. “Loose Bruce” is Bruce Garland, who was a Ford Team mechanic with Tricky Trev (the auto electrician) and George Smith, JG (John Gray) and KC (Keith Chesterton). They were loud and full on in the workshop and in rallies. How Bondy and Riles (Bob Riley) coped with them I’ll never know! Captain Smelly was my best mate Keith Byrn, as he had/has a flatulence problem. It is the thing in the world that he’s best at! Cottonballs was Peter Glennie, the world’s fastest cotton farmer from Moree. Another good mate. He was fast and a funny man with a dry sense of humour. There were plenty of others, including Peter Perfect, King Dick of Queensland, Captain Kaos and many others. Oh hell, I nearly forgot my mate Ron Pedders’ star pupil, Hugh Bell, who was known as Huge Balls. His driving was something to behold and he must have had something ‘extra’ in his overalls! Greg ‘Browneye’, the Brown boy from Bathurst, was another to get a new nickname from me. 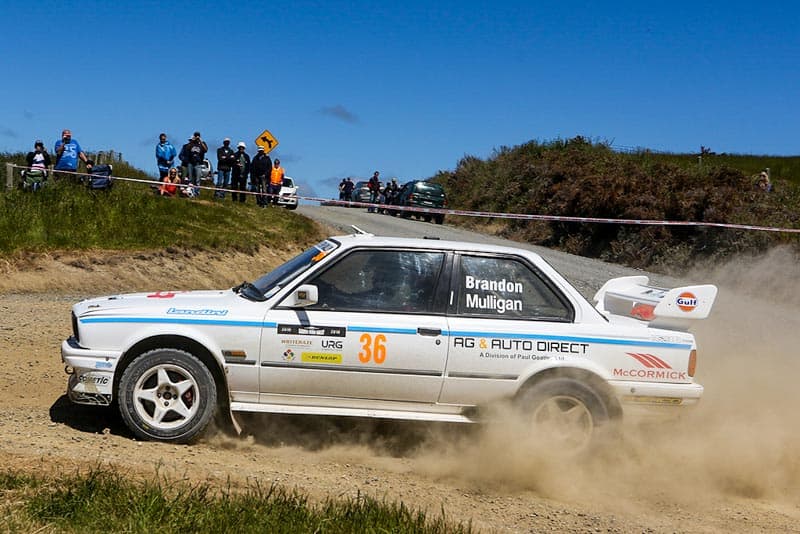 Mulligan's BMW now resides in New Zealand and is a regular in the Otago, Catlins and Silver Fern rallies.

As you said, you’ve done plenty of rallying in New Zealand since 2010. What’s the attraction? I’ve just done my 10th Otago Rally. It’s a very special event and I rented an Escort with a Duratec for a few years and sent my E30 BMW over in 2014. We won the Silver Fern Rally Challenge category in 2012, which was really special. I’ve done a few Westland and Catlins Rallies, plus the 2012 NZ WRC round that ran out of Auckland. That was my first noted event with WRC legends doing recce at the same time as us. It was a dream come true. It had fantastic roads and it’s where I met Derek Ayson, who loved me backing the rental Escort into cambered corners. We’ve become good mates and he has run my Escort Cosworth three times in Aussie events. You famously had sponsorship from mens’ magazine Penthouse in your Escort days. How did that come about? This was done one week before the Castrol Rally in 1981. We were running both the BDA and Snoopy (an RS2000 Escort), with Clive Slater and Anne Heaney in it. I had to chaperone Penthouse Pets on harbour cruises and functions. I can tell you, they did not look anything special with their clothes on! Penthouse had their ‘Pet of the Year’ competition, which had a rather busty and lusty girl called Tracey, who joined us for photo shoots and the like. Like me, she would not be a beauty competition winner these days! Ironically, Penthouse hooked me up with Marantz and we had a couple of great years with the Marantz Penthouse Rally team. 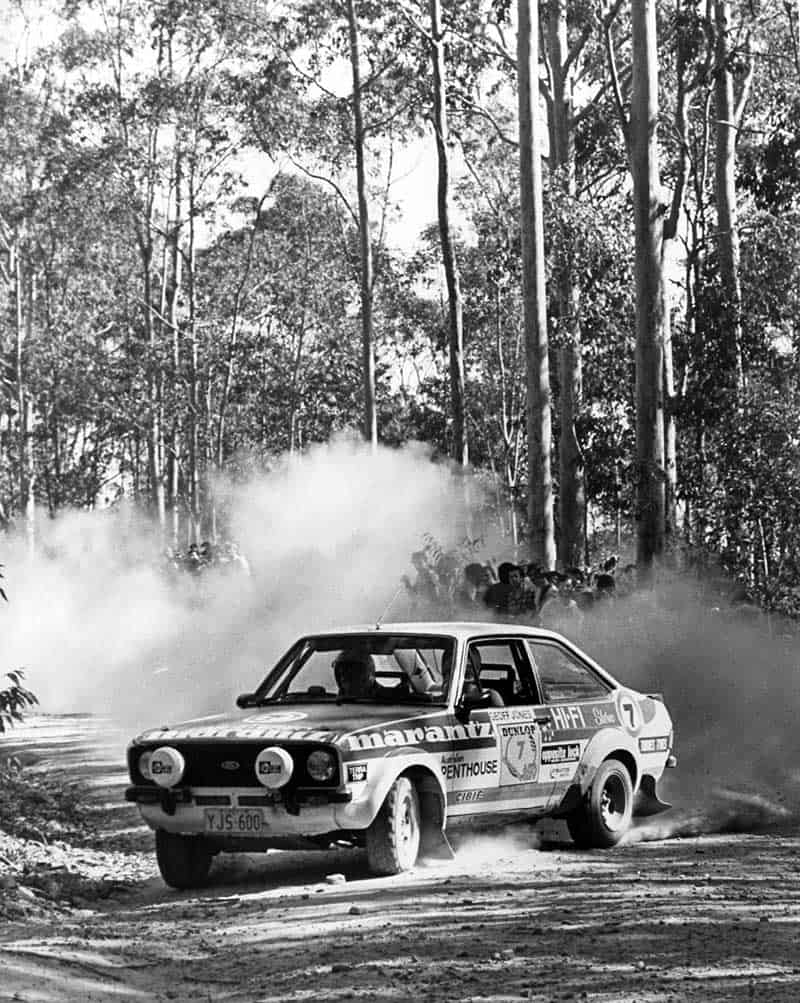 Ed Mulligan was famous for his Penthouse sponsorship in the 1980s. Here he is in the Dunlop 2G0 Rally.

You also did the 1979 Round Australia Trial, but have quite different memories of the event from many others. I bought Snoopy, the original RS2000 that Colin Bonds Ford Team had rallied. It had been pensioned off and was retired and unemployed! We picked it up from storage and told Bondy, then we negotiated the price! We elected to run three people, being Keith Byrn (Captain Smelly) as second driver and Chris Heaney as navigator. We were out of dollars before we started, having just built the BDA. The plan was to see where we were up to early on and if it was not going well, we’d pull out and return home. We had clutch, starter motor and other issues before Adelaide, so we soldiered on to Maree before pulling out. It was a great adventure, but a really horrible and not enjoyable event. I have no regrets pulling the pin, much as we did in 2017 at the wet Alpine in the V8 Manta. My thoughts are, it’s no use ruining a good car for no reason. Before the Repco, we did stun the locals at Port Melbourne beach by driving the rented Escort we had before the start onto the sand for practice crossing dunes. It did 100 metres on the beach and got plenty of attention. The clutch still smelt badly back at the hotel 30 minutes later! Anyway, we retired from the Repco at Port Augusta. Why anyone wants to do Repco event re-runs is beyond my thinking! 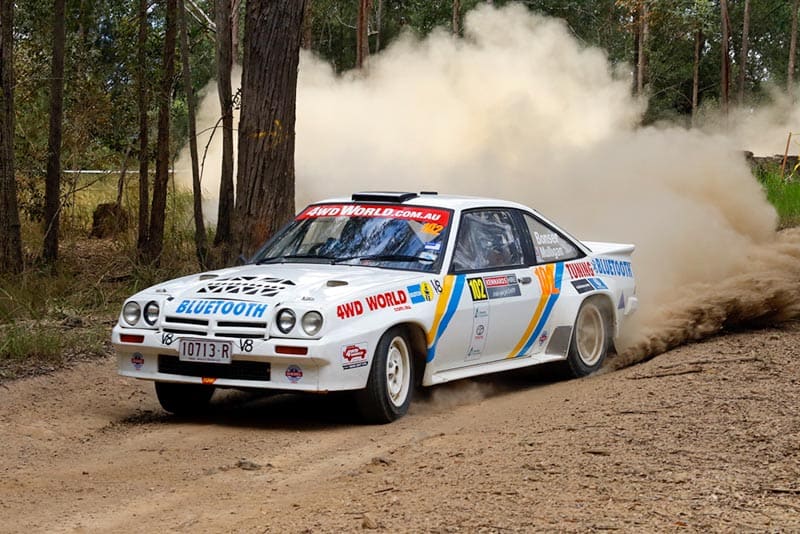 Rally Australia 2018, and Ed Mulligan at the wheel of his V8 Opel Manta.

After the racous Group G ‘run what you brung’ days, you were a pioneer in the new Production Rally Car class. We thought we were doing the right thing by supporting the PRC category. The sport had gone crazy with the V8 Stanza, rotary engine Dattos and the like. If spectators were killed by these illegally registered rally cars it could spell the end of rallying as we knew it. So, my old navigator, Geoff Jones, owned the Mazda RX7 rally car that he and Peter Johnston competed in. We sorted it out a bit, but it was nothing like a BDA Escort to drive. In fact, it was boring and slow! The decision upset the Fiat team with Greg Carr and Fred Gocentas, who put Wayne Bell in a Fiat to stop us getting all the points. We caught them being towed in a stage. I wish we’d had mobile phones with cameras in those days. The Fiat team did not get penalised as they told the world’s best fibs! 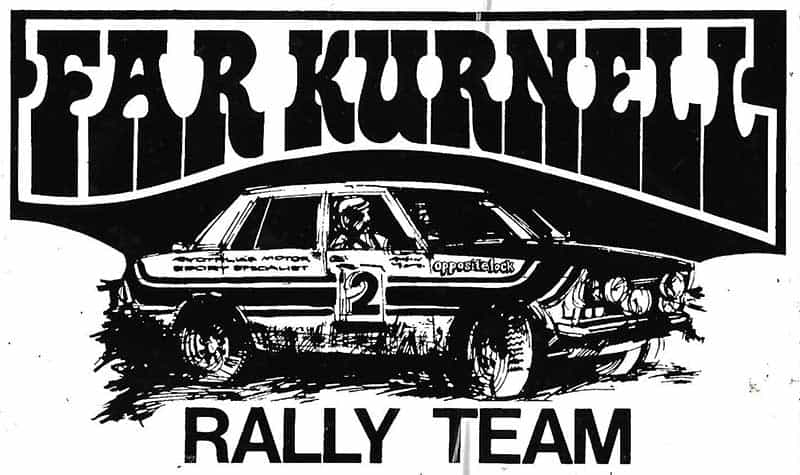 Another famous Mulligan trait was your rally stickers …. At Opposite Lock, we did some special release ones in the 1980s. These were: “Rally Drivers do it Sideways”, “Rally Drivers do it Faster”, and “Rally Navigators read Route Instructions”. Plus, our rally team was the “Far Kurnell Rally Team”. We had stickers and ‘T’ Shirts done, and we did more at last years Rally Australia for a laugh. 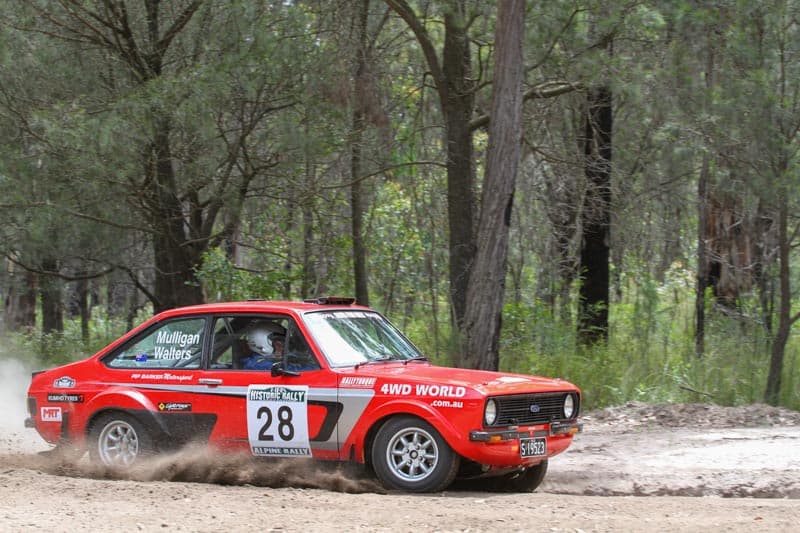