Xtreme Racing has welcomed a new major sponsor and announced an all-female team to tackle all six rounds of the 2014 WA Rally Championship (WARC).

Driver Joanne Mcilroy said the team was proud to have United Financial Services as their new key supporter.

“We’re thrilled to have them on board,” she said. “United Financial Services are one of Australia’s leading providers of a broad range of automotive and personal finance." 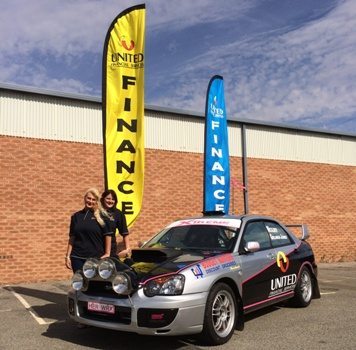 With the support of United Financial Services and Budget Busters Discount Groceries, Mcilroy and co-driver, Cindy Gielingh-Jones, will pair up for the first time when they compete in the Quit Forest Rally (QFR) which kicks off on the Busselton foreshore on April 4.

The long-time friends, who are no strangers to the high-speed thrills of rallying, are determined to stand out as the only all-girl crew in a male-dominated sport.

The car also has the slogan ‘It’s an Xtreme Chick Thing’ blazoned across the back in eye-catching hot pink.

Gielingh-Jones summed up the girls’ motivation for the season saying: “We want to finish the event exactly the way we start – with plenty of laughs and smiles.”

QFR celebrates its 30th anniversary this year. The event covers over 200 kilometres of stages through the tall timber forests of Nannup and at the super special stages on the Busselton waterfront.

QFR starts at 6pm on Friday April 4. There are plenty of opportunities to view the action and spectator information is available at www.quitforestrally.com.au.