The rally fraternity gathers in Lakes Entrance every two years for Australia's most anticipated rally, and this year's running of the Alpine Rally had everything. RallySport Magazine was part of the throng of gravel junkies who set off for the 99th edition of the world's fourth oldest motorsport event. Here's a few of the highlights from our trip. 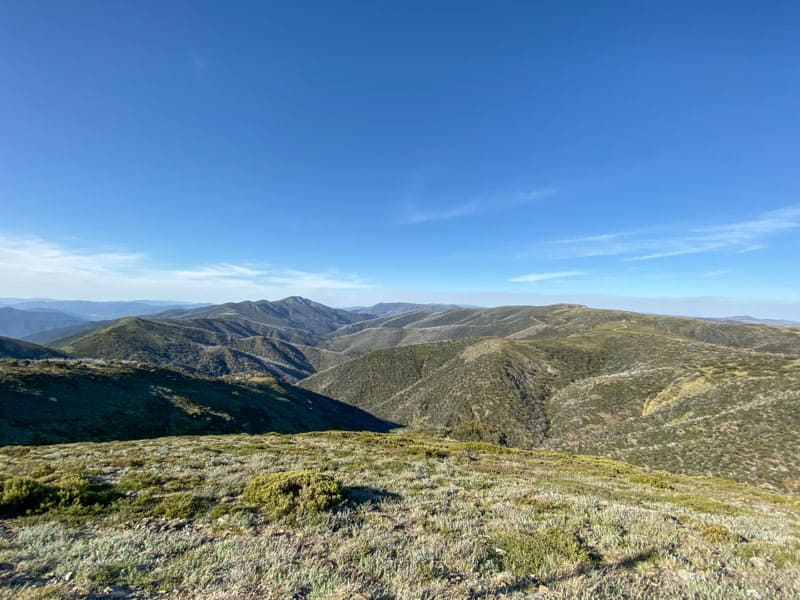 Clear blue skies on the 'sunny side' of Mt Hotham on the way to the Alpine Rally.

SUMMER'S HERE ... Even before we left home for Lakes Entrance, summer had hit hard. Forty degree days, lightning strikes and strong winds had fanned bushfires in east Gippsland and the Alpine Rally was already suffering. Two stages of Friday and all of Sunday's stages had already been cancelled before we left home, and we were constantly watching the VicRoads website to see if our route to Lakes Entrance – over Mt Hotham and along the Tambo River on the Great Alpine Way – was passable. A fire north of Bruthen had closed the road, but fortunately was re-opened in time for our departure. Nevertheless, temperatures were in the mid 30s, with clear blue skies up and over the mountains. As we descended into Omeo things changed markedly though. Thick smoke hung in the air and with no wind, it was an eerie feeling as we headed further east towards our destination. The setting sun was blood red, adding to the mood. Nearing Bruthen, the fires had decimated the forest and it was clear to see the intensity of the fire as it had ripped through the native vegetation. 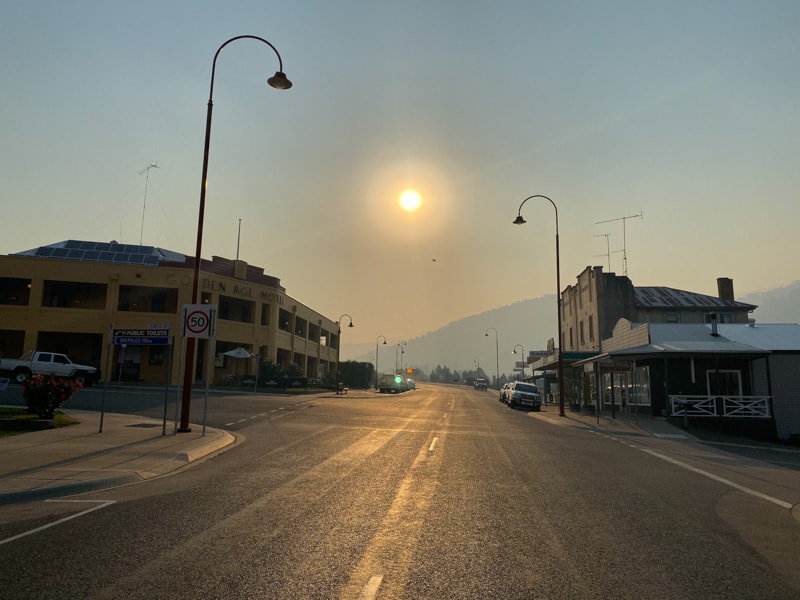 Arriving in Omeo, the smoke was thick from recent bushfires. 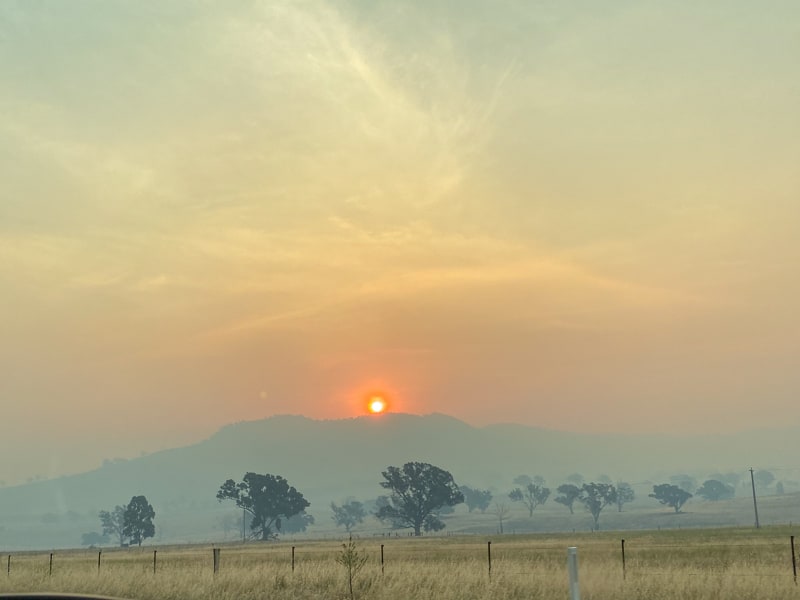 The smoke saw the setting sun change from orange, to red, to pink.

UNWANTED GUESTS Some friends of ours were also travelling to the Alpine, and stopped in Bruthen for a toilet break. Poor Sam was literally caught with her pants down when a red bellied black snake slithered under the toilet door while she was in attendance! Fortunately she was able to climb onto a nearby baby change table, where she managed to call her husband, who then had to play the hero and catch the offending reptile. After the snake was set free in a nearby paddock, they continued on their merry way, their heart rates still dangerously high. 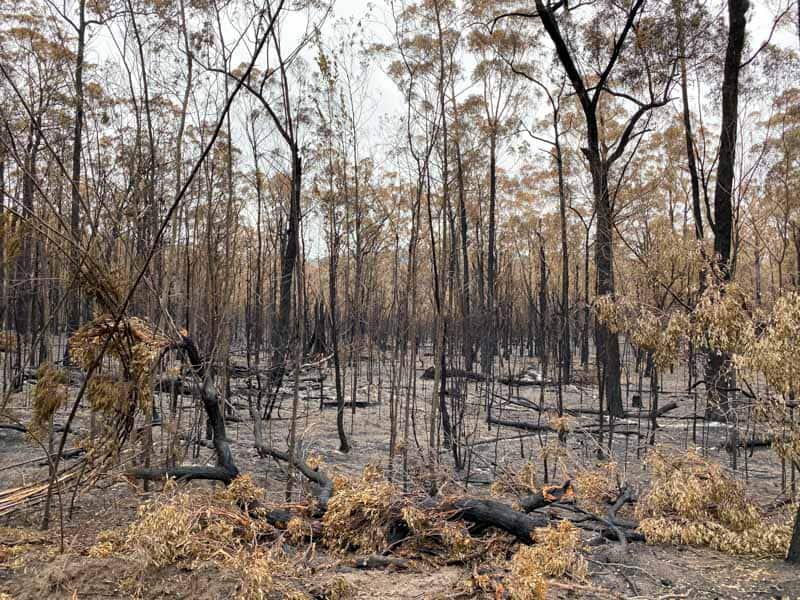 Bushfires had devastated the native forests around Bruthen.

HELLO, OLD FRIEND Perhaps even more than the variety of rally cars and the action that unfolds, the real joy of an Alpine Rally is catching up with so many rally friends from around the country. I lost count of the people I shook hands with, said hello to, and reminisced with about days gone by. The event start had an incredible atmosphere of camaraderie and mateship, and it was difficult to drag yourself away and head to the first stage to watch the action unfold. A REAL DUST UP Months of dry weather in Gippsland meant that the opening forest stage was dry and incredibly dusty. The dust wasn't hanging, so the two minute gaps were sufficient, unless someone had a problem and two cars ran close together – as was the case for Darryn Snooks just 3km into the first stage. In no other event in Australia do you see the variety of cars that you do in an Alpine. From Mk1 Cortinas to Mitsubishi Sigmas and a Mercedes Benz, the entry list just about had it all. 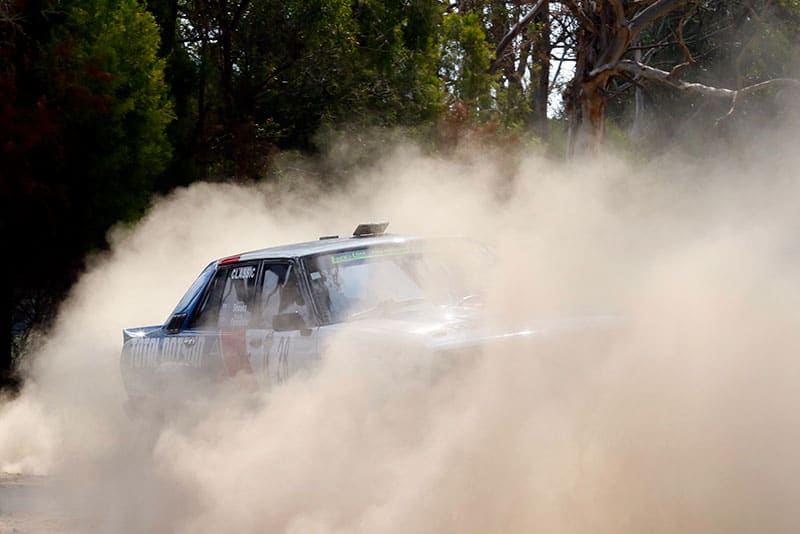 AND THEN IT RAINED It started late on Friday evening and didn't appear to stop at all during the night. By morning, the puddles were large and the rain continued to fall as we headed out for an early start at the first stage of the day. $5 umbrellas from the Reject Shop proved their worth quickly as we watched the Alpine field slip and slide around the stages. Conditions deteriorated rapidly as each car passed, and it's about now that you really see what impact a 100 car field can have. Inevitably, the continuing rain caused the cancellation of the final two stages of the day which, after earlier stages had been cancelled because of bushfires, was ironic. But as is a common phrase on this event, "that's the Alpine for you". 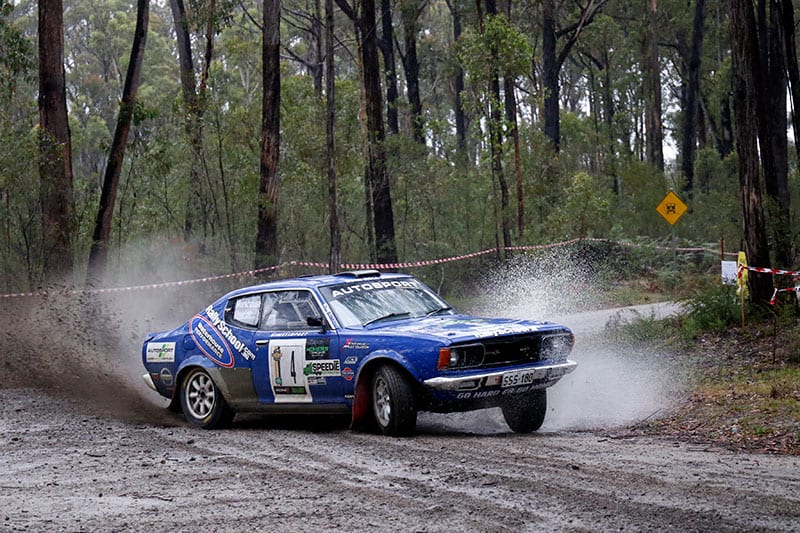 Saturday morning rain made conditions tricky, and saw many cars slide off the road, including Jack Monkhouse.

OUT OF THE FRYING PAN, INTO THE ....... SNOW Our trip home on Sunday really provided the ultimate full stop on our Alpine Rally experience. Again we travelled through the bushfire ravaged forests near Bruthen, before climbing towards Dinner Plain and Mt Hotham as the temperature continued to drop. At Dinner Plain – and on the first day of summer – the clouds descended and the snow started to fall, lightly at first, then more heavily. 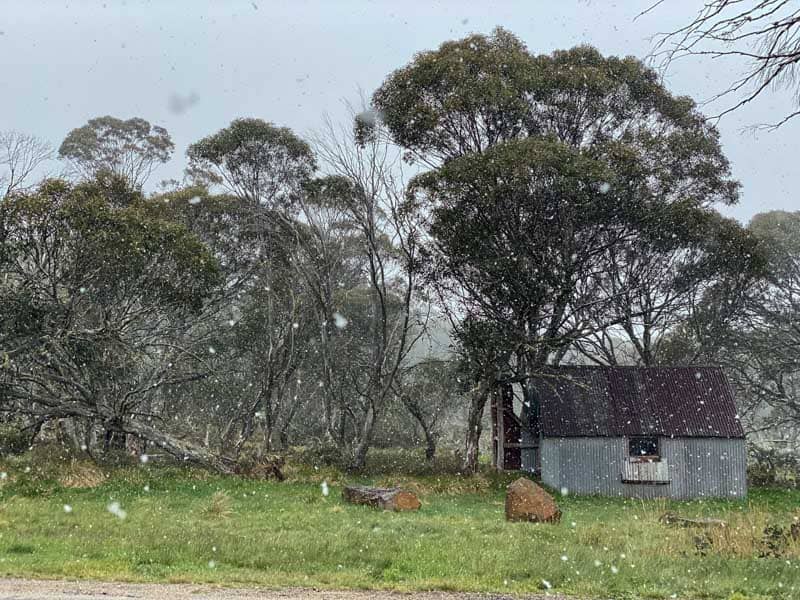 By the time we got to the top of Mt Hotham it was really belting down and was piling up on the ground. The temperature was minus one, but the 'feels like' temperature was minus 13 as the wind ripped across the Victorian Alps. It meant we didn't last long out of the car. The irony of it all was the warning sign on Mt Hotham that read "Fire Danger Period", complete with snow accumulating underneath it. That's the Alpine for you! Bring on the 100th edition in 2021. 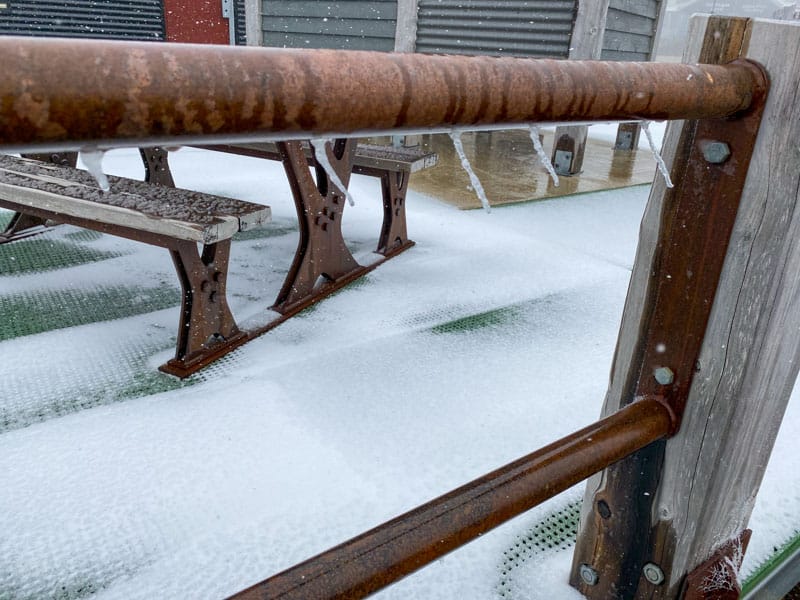 Icicles and fresh show on top of Mt Hotham as the temperature dipped below zero. 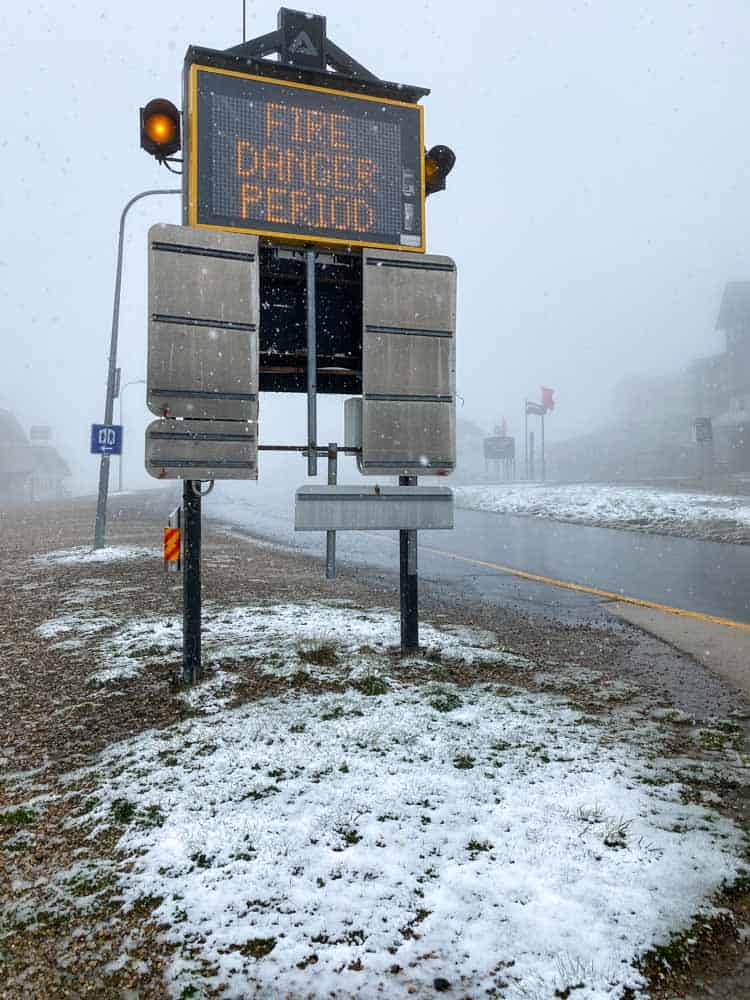 There wasn't much chance of fire on Mt Hotham on the first day of summer 2019. 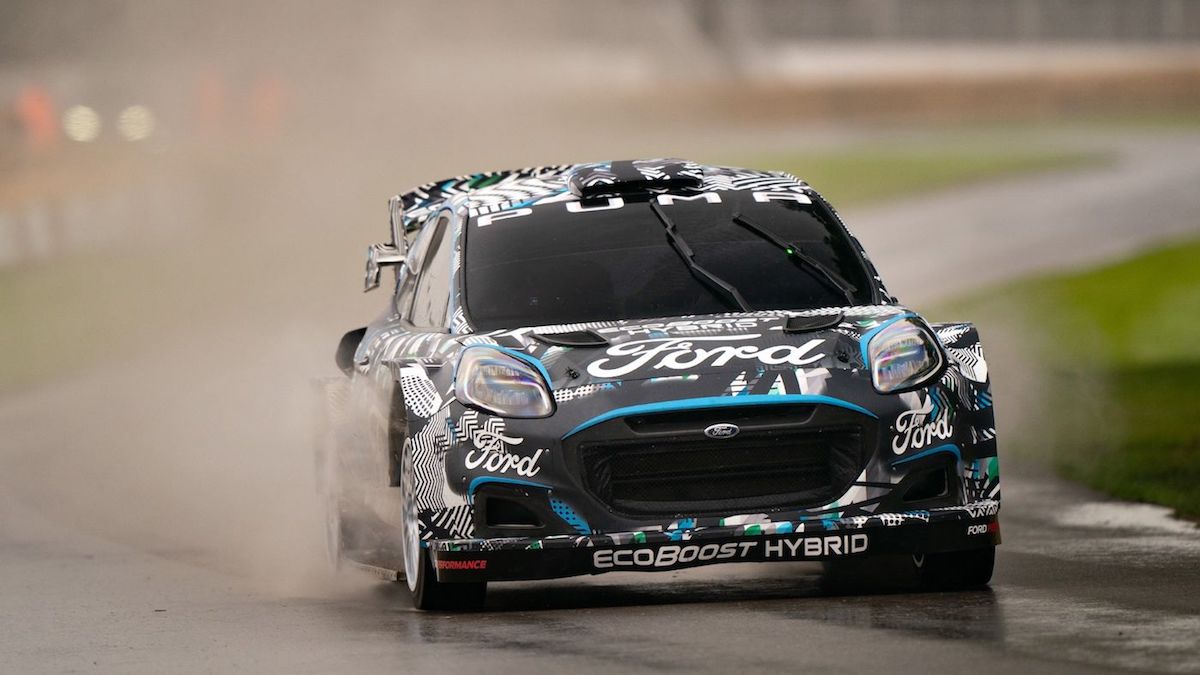 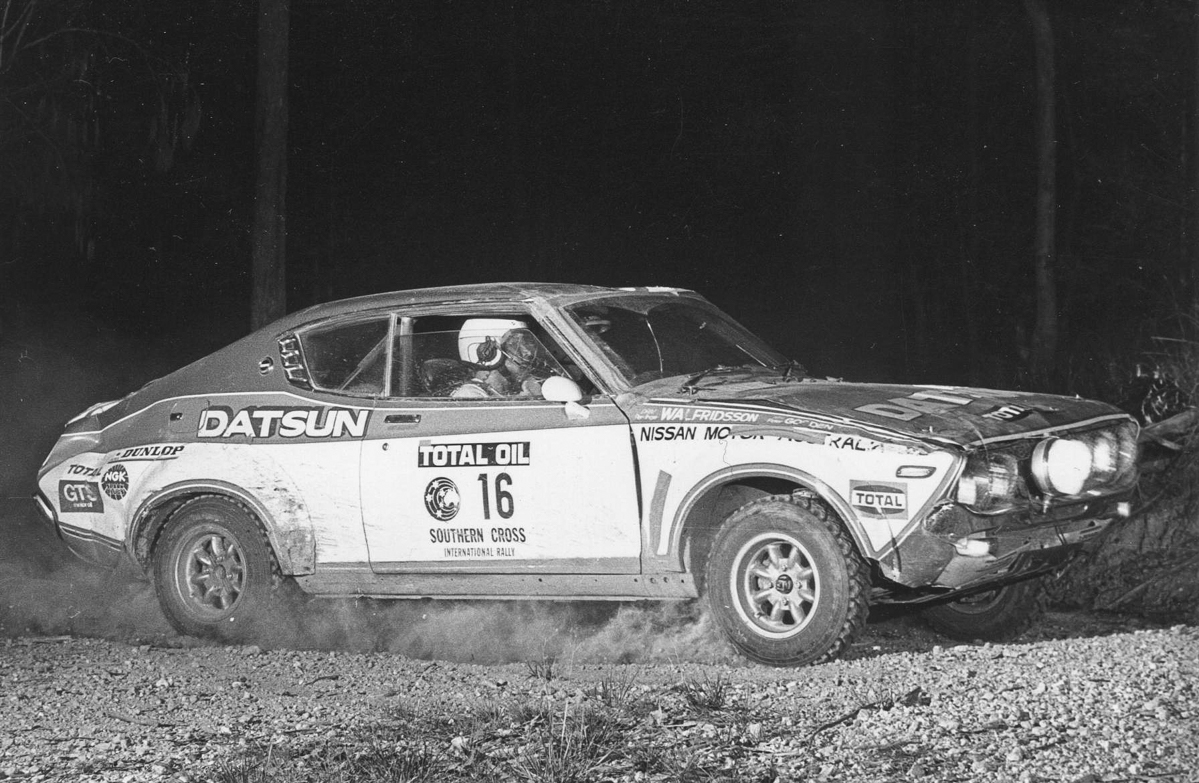 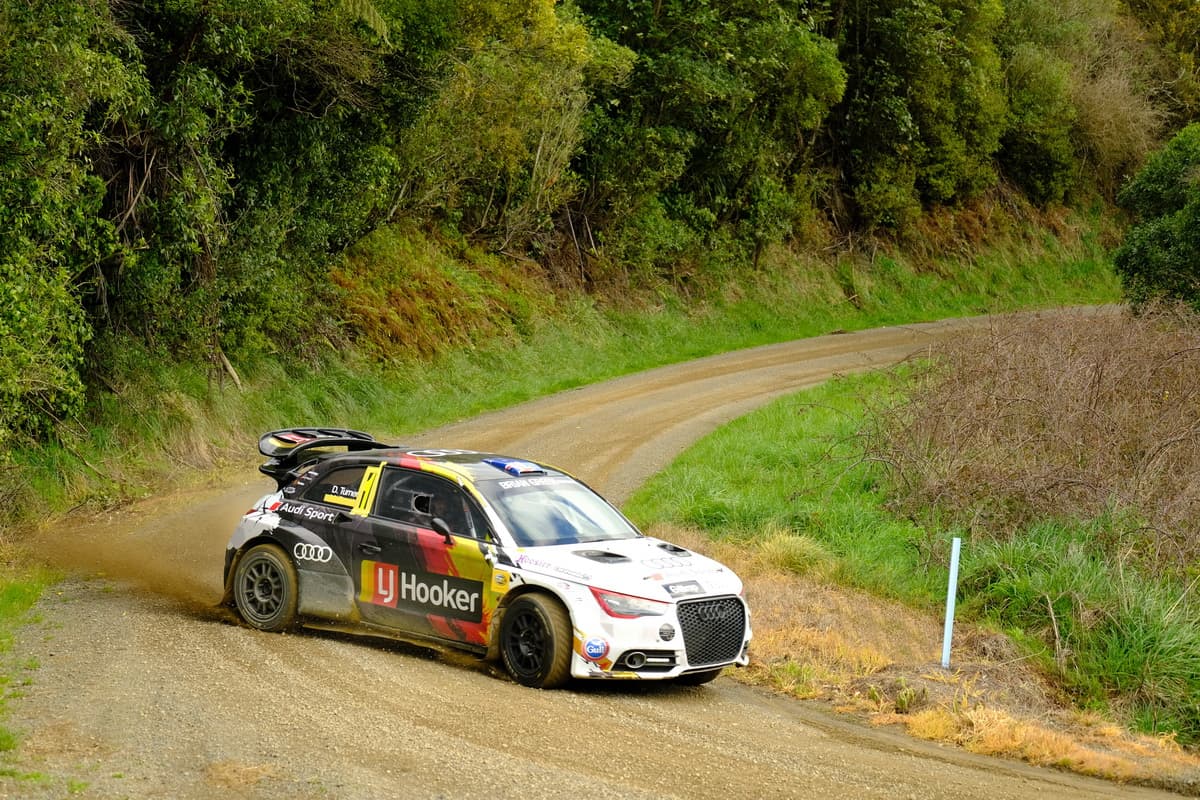