Chris Atkinson will step into the FIA World Rally Championship spotlight when he makes his debut for the factory Hyundai Motorsport team at Rally Mexico today.

Atkinson, 34, from the Gold Coast, will drive the ambitious new team’s 8# Hyundai i20 WRC in the first gravel-surface event of the 2014 season, one on which he has an impressive record.

The four-day rally, round three of the WRC, gets under way with a colourful nighttime ceremonial start in Guanajuato, near the event base in Leon, followed by a spectator stage run partly in narrow, cobbled tunnels under the historic city. 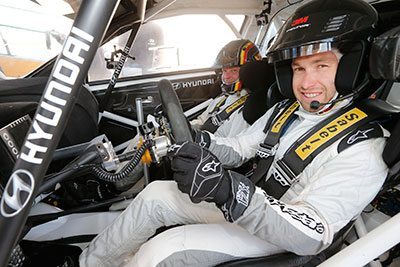 Chris Atkinson resumes his WRC career this weekend in Mexico.Atkinson won that stage in a Ford Fiesta in 2012, although he retired later.

Atkinson’s extensive experience in three different car makes on the high-altitude, rough-surface Mexican stages, plus gravel skills honed on his Queensland home roads, ensured his selection at Hyundai for this critical test alongside regular Thierry Neuville.

He’s hunting a strong result to persuade team chiefs to give him more drives during the year – although he’s already locked in for Coates Hire Rally Australia on 11-4 September – but plans to balance ambition with caution.

“It is a unique rally with the high altitude and the varied terrain, which makes it a great challenge for the drivers and the cars,” Atkinson said.

“Being in good physical shape will be very important in Mexico. I’ve been doing some training in the middle of the day during the Australian summer when it’s 35 degrees and I’ve also done some exercise in the sauna to be as much prepared as possible.

“Being the first gravel rally of the year, it will be interesting to see how well the i20 WRC performs in these conditions.

“It’s a long event. You have to manage your speed over the event. Normally there’s a lot of retirements, but if you are smart you can get a good result.”

Despite the form Atkinson brings to the fledgling team, the event is likely to be fought out by the usual front-runners representing Volkswagen, Citroen and Ford.

Leon sits at 1815 metres and the stages in the Sierra de Lobos and Sierra de Guanajuato mountains climb to nearly 2800 metres.

That’s not enough to induce altitude sickness in drivers and co-drivers, but the thin air does affect World Rally Cars, which lose about 25 percent of their engine power. Overheating of engines and brakes is common.

New regulations on the starting order for gravel rallies coming into effect in Mexico for the first time also will be a significant factor.

This year, the day-one starting order will be set according to championship standings, with the series leader first on the road. Subsequent days will be determined by finishing order on the day before.

The rules mean championship leader Jati Matti-Latvala must start first and will have the unenviable role of pushing aside loose surface gravel with his Volkswagen Polo R to make a faster track for following rivals.

The Rally Sweden winner said: “The win in Sweden was a special moment for me and has obviously given me an extra dose of confidence. The scrapping of qualifying means I, as the championship leader, have to be first out onto the route.

“It goes without saying that this is a handicap. However, rules are rules. We want at least to finish in the points. A place on the podium would be great.”

The enthusiasm of the Mexican fans, accompanied by an explosion of music and colour, makes Rally Guanajuato Mexico one of the WRC’s favourite destinations.

Organisers expect close to 400,000 people will watch this year’s rally.

World Champion and 2013 Mexico winner Sebastien Ogier said: “The start in Guanajuato is a fantastic experience. Down narrow lanes, through tunnels, and past thousands of fans cheering you on frenetically – that is pure goose bumps!”