Four top driving talents will showcase the serious competition ahead in the FIA European Rally Championship when Rallye International du Valais hosts the thrilling race to clinch the coveted ERC title from 23-25 October.

Based in the canton of Valais in southwest Switzerland close to Lake Geneva, the 55th running of the asphalt event takes on added significance with star performers Esapekka Lappi, Sepp Wiegand, Kajetan Kajetanowicz and Craig Breen all in contention for the prestigious ERC prize.

Maintaining its status as the most important event in Swiss motorsport, the rally features 19 mainly asphalt stages over a competitive distance of 260.20 kilometres on mountain roads. The opening leg starts in Sion on Thursday 23 October and ventures into Upper Valais for the first time and a new stage through the German-speaking towns of Varen, Inden and Leukerbad. Friday’s route includes two visits to the Caserne military barracks stage in Sion before the event relocates to Martigny for day three when the monster 32.13-kilometre Les Cols test will be one of the highlights.

As well as counting for overall ERC points, the event is a round of the ERC Production Car Cup, ERC 2WD Championship, the new-for-2014 ERC Junior Championship and the Swiss Rally Championship. While Sébastien Carron has secured the national title, all other categories are up for grabs. The event also represents another opportunity for drivers to score ERC Asphalt Master points, a new initiative from ERC promoter Eurosport Events to recognise surface specialists in the European championship.

FOUR TO THE FORE IN ERC
Four drivers will battle for the ERC title in Switzerland. This is what they have had to say ahead of the penultimate round of the season.

What does it mean to you to be one of four drivers in ERC title contention with two rounds left?
“It means a lot. Before the season started no one expected us to be in the fight with our old S2000 car against the R5s. And also because I didn't have so much experience from these races.”

How important would winning the ERC title be to you and your career going forward?
“It's priority number one now for sure, I mean that’s why you are here competing. Normally you try to win every time, and if you can win a series, it's a sign of some sort of consistency and speed. And for sure winning a title always helps you somehow for the future, it's just difficult to say how.”

What's your strategy going to be on Rallye International du Valais?
“In Ypres and Barum I said that I don't want to do stupid mistakes, and you all know what happened. So now I don't say anything. We will see how it goes.”

How will you prepare for the rally?
“I will watch all the on-boards from last year and make some notes, some physical training as well, then relax and one time will do totally something else, that I can forget rallying for few minutes.”

If you don’t win the ERC title, who will and why?
“I think my team-mate Sepp is the strongest choice, he’s finishing the rallies and getting the important points.”

What does it mean to you to be one of four drivers in ERC title contention with two rounds left?
“I am very happy so far with our season. With second place overall we have a great possibility to finish on the podium in the end. That would be absolutely fantastic, because many other drivers are driving and testing much more than me. So far it is my best season since I started in 2011.”

How important would winning the ERC title be to you and your career going forward?
“It’s like a dream when I see that it’s possible to win the European championship. I think it can help a lot for my future because I am fighting to get more mileage and testing in a rally car. If you have talent than you can reach a level and have a structure for a successful future.”

What's your strategy going to be on Rallye International du Valais?
“I don’t know Rallye du Valais but I think it’s a difficult rally. Lappi and Breen are used to these roads from last year and they know the rally. I try my best like always, using my head and working on my pace all the time. I try to focus 100 per cent and enjoy driving in my ŠKODA Fabia.”

How will you prepare for the rally?
“I watched videos from last year because I think the stages are similar to this year. Barum was quite a long time ago, so I’ve just tried to analyse my performances over the last few events.”

If you don't win the ERC title, who will and why?
“Four drivers can win the title, so we will see who it will be in the end and I’ll give my best to become the champion.” 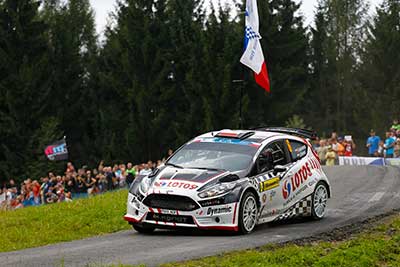 What does it mean to you to be one of four drivers in ERC title contention with two rounds left?
“It means that the decision to take the next step in my career, taken together with our sponsors, was correct! I am very pleased with our achievements in FIA ERC so far, especially when you consider that this is our first season in the series. Basically every rally is new to us and we learn a lot of things about each event in which we take part. We have to remember that rallying is, after all, a team sport. I think that regardless of our final position in the championship we can already say that this season is successful for LOTOS Rally Team.”

How important would winning the ERC title be to you and your career going forward?
“It would be – and I hope it will be in the future – the biggest success in my career, no doubt about it. This is what we aim for with the whole team, working hard and gaining experience, which is essential in this series. I am aware that achieving this target in my first season, with the strong opposition of factory teams and in such extremely difficult rallies, is like ‘mission impossible’. The fact that we are in the fight for top places and we are considered as title contenders is very nice; it is our prize for this year’s work. If I would be able to fight in FIA ERC next season, then our goal will be to convert this year’s experience into the championship title.”

What's your strategy going to be on Rallye International du Valais?
“We feel obliged after being awarded with the Colin McRae ERC Flat Out Trophy, so – as Colin used to say – the strategy is ‘pedal to the metal’! Of course our targets remain the same: it is not a matter of necessity to achieve something – it is just my desire. I love this sport and I want to share this love with everyone in Switzerland.”

How will you prepare for the rally?
“We had tests in my home area. We wanted to find the set-up for our Fiesta and get a good feeling on Tarmac because recently we have competed on gravel. Of course we also worked on theoretical preparations, gathering a lot of information about another event that is new to us. We are already waiting for the word ‘go’.”

If you don't win the ERC title, who will and why?
“The situation in the championship is very good for Esapekka, who by the way won Rallye du Valais last year. I think that at least several drivers have deserved the title but objectively looking at the point standings, the title should be won by a driver who has experience in international competition – and this is the most likely scenario!”

What does it mean to you to be one of four drivers in ERC title contention with two rounds left?
“Of course it was the plan at the start of the season to try and win the title. Although things haven’t exactly gone to plan during the year we’re still happy to be in the fight.”

How important would winning the ERC title be to you and your career going forward?
“It would be hugely important for me as I am uncertain of my future after this season. When you are not finishing events, your name can very quickly disappear from everybody’s minds, regardless of what the stage times say, so to win this title would be just what I need. And more than anything it’s a dream of mine, nobody from Ireland has ever won a major international rally title like that so it would mean the world to me.”

What's your strategy going to be on Rallye International du Valais?
“Valais can be a tricky one so for sure nothing silly. The character of the stages changes a lot, so people can be stronger on some stages than others, so we’ll have to find a strong pace and see where that puts us. Everybody is going to be pushing to win, so we will have to be doing the same. I really want this!”

How will you prepare for the rally?
“We will have a test on Sunday, albeit in France, but hopefully the conditions will be similar. My engineer and me have been looking over data from this season and from the event last year with the 207 S2000, so hopefully we can find a good set-up that will give me the confidence to push.”

If you don’t win the ERC title, who will and why?
“I don’t want to think about anybody else winning it because it makes my stomach turn! But probably Esapekka, purely because he is in the best position at the moment. But like I said, I can’t think like that. All I can do now is concentrate on my own driving in the final events, and hope we can do enough to win. It won’t be for the want of trying.”