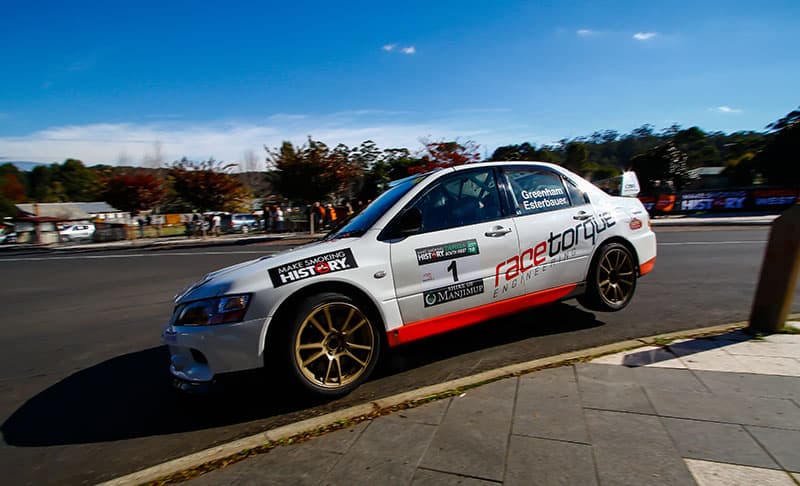 After a wet start on Saturday morning, conditions improved and were near-perfect for the tenth Make Smoking History Targa South West which was held in picturesque south west towns of Pemberton, Manjimup and Northcliffe.

The tarmac rally took place on 22 closed road Special Stages over a total distance of 130 kilometres, with competitors traversing 380 kilometres over the weekend (17-19 May). The stages ranged in distance from 3.11 kilometres to 15.13 kilometres with some tight technical stages and some fast, open, flowing stages.

There was an incident 400 metres into the first stage involving car number 8. Both the driver and co-driver were flown to Royal Perth Hospital and are expected to make full recovery. The co-driver has been discharged and the driver is expected to be discharged tomorrow.

The incident resulted in the following three stages, SS2, SS3 and SS4 being cancelled.

Mark Greenham and co-driver Stephanie Esterbauer took the top step of the podium at this year’s Make Smoking History Targa South West, making it back-to-back wins for the Greenham in his Race Torque Mitsubishi Lancer Evo 9.

The duo won eight of the eighteen stages that were run (derived time for SS1) and they were within seconds of winning the others. He also won Targa South West in 2016, thus finishing as the winner in every Targa South West event he has entered, but this is his first win with Stephanie as co-driver.

“Steph did a fantastic job all weekend. We’ve been a driver and co-driver team for a number of years, but luck hasn’t always gone our way with mechanical failures and other things happen at other events, so it’s awesome to get our first rally win together,” Greenham of High Wycombe said.

In second place just 35 seconds behind was Will White and Bernie Webb in their Store Local Mitsubishi Lancer Evo 9. Had White not clocked up 45 seconds in penalties for breaching controlled speed zones, it would have been a different result. Third fastest was Mark Cates and Declan Stafford in their Axis Hire Nissan R35 GTR, just 28 seconds behind White.

Greenham said that once they discovered White had been handed speeding penalties, they went into preservation mode.

“The car was faultless on the first day and we were running very close to Will White, running equal first, so on the second day, we planned to manage the gap and thought we were going to have a cruisey day,” Greenham explained.

“We broke the front right strut on a rough section of SS18 (Pemberton Town stage) and were forced to drive the rest of the remaining four stages with the front right corner sitting on the bump stop. It was a battle to keep the car on the road but without a service park interval available and Will White behind us still in the hunt for the win, we had to keep pushing all day.”

Greenham said that the Pemberton to Northcliffe and the reverse stage was fantastic.

“Targa SW is a really good event, it’s really well run, and local community are so supportive. Plus the scenery is gorgeous, it’s a stunning part of the State.”

Greenham said he has his eyes set on the Bunbury Sprint tarmac rally next month. 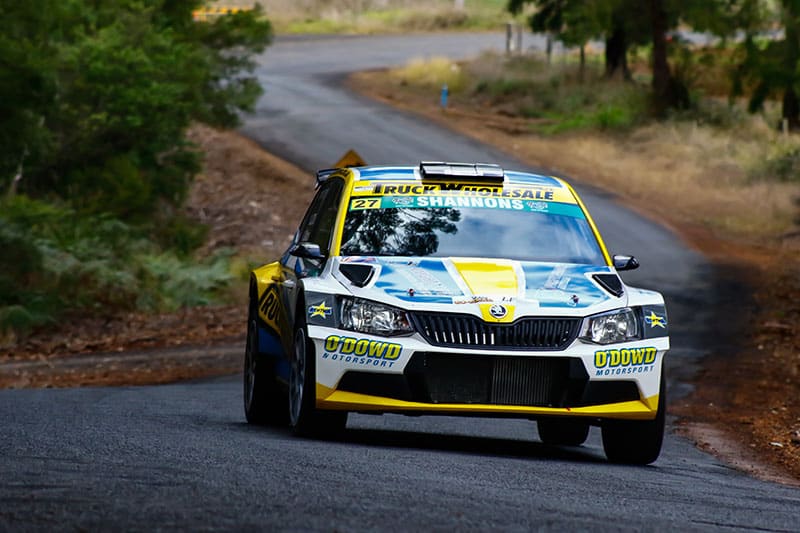 It was the first time that an R5 car, which is level below a World Rally Car, competed in a tarmac rally in Australia. The Truck Wholesale WA Skoda Fabia R5 driven by reigning State gravel rally champion, John O’Dowd with Glenn Macneall calling notes set some impressive times on Leg Two but it wasn’t enough to take a podium place. They finished in fifth 2:29 minutes behind first place.

This is Wolfe’s best result to date and he said he was very happy to take the win.

“This was only my second rally with Richard and he called the notes impeccably all weekend so I’d like to give credit to him. We had a lot of fun, it was very enjoyable,” Wolfe, from Kalamunda, said.

“We had made some adjustments to the suspension before the event, but during recce on Friday we didn’t feel quite right so we adjusted it some more and on Saturday, it was perfect. The car was good and didn’t miss a beat the entire weekend.

“This was a grudge rally for us. Last year was our first time in Classic category and we missed out on the top spot by just 8 seconds. We knew what we had to do to one better, we had a plan of how to drive the car and stuck to the plan and it paid off.

“The stages were really challenging with variable weather – heavy rain at the start, sunny dry sections and some sections of the stages were a bit greasy, but it made it interesting, and you had to adjust your driving style to suit the conditions.”

This is the seventh time Wolfe has competed in the Make Smoking History Targa South West and besides finishing bridesmaid last year by a whisker, his best result was third place in the Modern category a few years ago. He was clearly elated to have redemption. 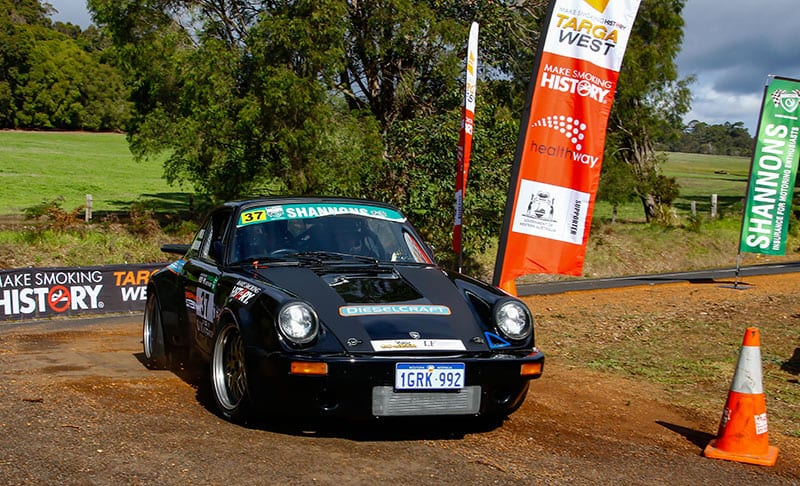 Wolfe, 53, said that the Bunbury Sprint and Make Smoking History Targa West were both on his radar next.

The Targa 130 class that was formerly known as the Challenge Category has a speed restriction of 130 kilometres per hour.

Taking top honours was husband and wife duo Jeffrey and Catherine Foster in their 2016 Porsche Cayman 981 GTS, a stock standard showroom car according to Foster.

“We were even running on street tyres! It’s hard to drive on the limit on tyres that don’t have as much grip,” Jeremy Foster said.

Foster, who first competed in Targa South West last year and finished fourth, said that he’s been racing for about three years.

“I joined the Porsche Club of WA and started driving there and got some good results. From there we’ve entered other Targa events and the goal is to build up to do the full Targa West series of events and next year, the big goal is to do Targa Tasmania. The events we have here in WA are really good warm up events to that,” said the 56-year-old geologist from Bicton.

“The car is brilliant, it’s one of the best cars you can get, it’s bullet proof – the suspension, the brakes, it just never gives up. If the Cayman had a heart, it’d have the heart of a lion. I felt super proud of car, it made us look good, better than we are.

“We rally for the enjoyment and the camaraderie – we go out to drive well, so winning is a bonus. That said, we’re totally stoked. It felt special for both Cath and I, our original aim was to just finish and get through it. To win – wow!

“There was a good variety of stages, some were really challenging in the wet and we drove within our limits and did well. We really enjoyed the last stage in Pemberton. And the food in Northcliffe was fantastic – scones with jam and cream were just brilliant, great endurance food, food for the soul.

“My wife Catherine is a fantastic co-driver on full pace notes and called everything just perfectly. It was me making mistakes. You can’t win an event like this without a good co-driver, it’s absolutely essential to doing well.

“We’d like to thank the people of Pemberton, Manjimup and Northcliffe for their hospitality, to all the other competitors for being great sports and fantastic people, the volunteer officials who are amazing and do it for love, and big thanks to Ross and Jan and their team for pulling it all together and doing so well.”

A high-quality field of 36 teams lined up at the start line and 34 teams crossed the finish line.

“Besides the incident, it’s just a happy enjoyable event in a beautiful part of the world and we were welcomed by the Shire of Manjimup with open arms.”

DMack Tyres – gone but not forgotten