Australian driver, Neal Bates, holds a commanding 46.3 second lead in the Stadium Cars / Ssangyong International Classic Rally of Otago after the first day, after his main rival, Hayden Paddon, crashed out late in the day.

Driving a Ford Escort RS1800, New Zealander Paddon had won the opening five stages of the event, south west of Dunedin, to open up a handy 30.2 second lead over Bates, while 1984 World Champion, Didier Auriol, struggled to come to grips with his Escort. 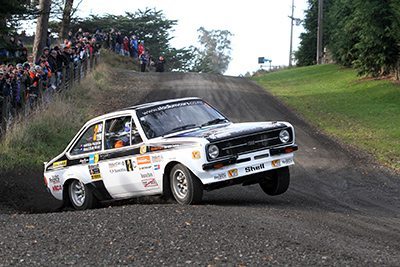 Hayden Paddon was fast and exciting, but rolled his Escort on stage 6.But Paddon, the Hyundai World Rally Championship driver, rolled his car 5.6 kilometres into the final gravel stage of the day, and while his car wasn’t badly damaged, it broke the steering and put him out of the running for victory, handing last year’s winner a comfortable advantage.

Driving the same Toyota Celica that he drove to victory in 2013, Bates and co-driver, Coral Taylor, were never far off Paddon’s pace, but their consistency came to the fore as the Escort driver faltered.

“It’s been a great day,” Bates said after the final tarmac stage around the streets of Dunedin.

“The car has been fantastic and we were generally only about 0.2 second per kilometre slower than Hayden, so I’m happy with that.

“I was quite worried about this morning’s stages because they were fast and cresty, but our pacenotes worked perfectly and we were able to push hard.”

For Auriol, the event’s star international driver, it was a difficult day on the challenging roads of south Otago, after which he lies in sixth place. 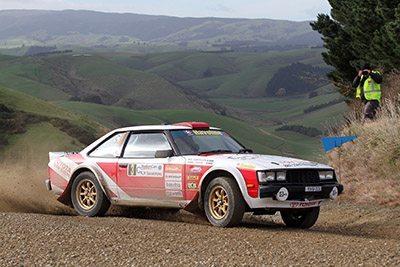 Neal Bates is on track for his second Otago Rally win in a row.“I am fighting the car all the time,” the Frenchman said, commenting on the handling of his borrowed Escort.

“The set-up of the car is not so good for my driving and the roads are slippery and quite hard for my first time. But we’re pushing hard,” he said.

Another Australian driver, Jeff David, has his Porsche in eighth place after struggling with brake problems for the first three stages, while lady driver, Deborah Kibble, is an impressive ninth in her Mitsubishi Lancer. Australian Darryn Snooks rolled his Mazda-powered Toyota Corolla on the fourth stage and is out of the event.

The Stadium Cars / Ssangyong International Classic Rally of Otago continues on Sunday with a further eight special stages south of Dunedin, before the champagne finish outside the historic Dunedin Railway Station at 3.30pm.

To view more of Peter Whitten's photos from Day 1 of the Otago Rally, CLICK HERE. 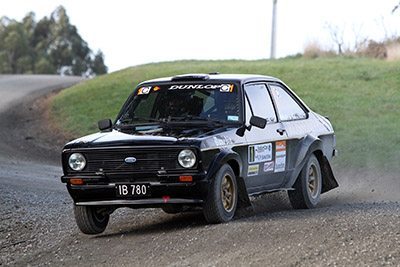 Didier Auriol struggled in his Escort, but still lies in sixth place.