The son of legendary Australian motorsport competitor 'Gelignite' Jack Murray is paying tribute to his late father through a new book.

As a small lad in the 1950s, I well remember the antics of a certain Jack Murray, who became famous for terrorising locals in many outback Australian towns during various Redex car trials of the era.

His penchant for blowing up country dunnies with sticks of gelignite was headline news on ABC radio of the day, and thousands tuned in to listen to what his latest misdemeanour would be.

It wasn’t long before he became know widely as “Gelignite” Jack and his larrikin image turned him into an Aussie legend.

But while his outback antics raised the ire of the local constabulary almost everywhere he went, they put Redex Trials firmly into the news right around the country and made Jack Murray a household name.

But not only was Jack Murray a more than competent trials driver, he was successful in many other sporting areas, including motor racing, hillclimbing, wrestling, boxing, swimming, ocean boat racing, Aussie rules football, water skiing, car endurance events – the list goes on.

To say that he had an exciting and full life would be an understatement.

Now one of Jack’s sons, Phil Murray, has finally researched his father’s life history and with it, released a book entitled “Gelignite Jack Murray, an Aussie Larrikin Legend”. 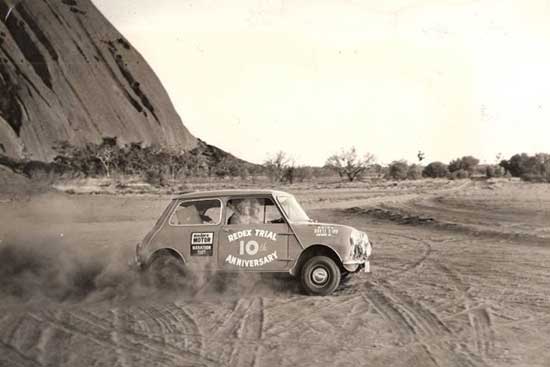 Jack Murray driving a Mini in a Redex Trial near Ayers Rock.The book fills a void that has existed for many years, that of recording all of Gelignite Jack’s sporting and personal achievements which, incidentally, must have been a huge task given his involvement in such a wide range of activities.

From a motoring perspective, Gelignite Jack is well remembered mainly for his Redex Trial participation (he clean-sheeted the 1954 Round Australia event with navigator Bill (no relation) Murray in the legendary Ford V8, nicknamed The Grey Ghost).

Then there were a series of across-Australia, around Australia and around the world adventures that filled in his time between his motor racing episodes at Bathurst in a Bugatti, and other venues across the country.

A review such as this barely skims over the highlights and the highs (and there were many) and lows of his life, but this new book just released (380 pages) certainly does the subject matter justice.

The book is a superb record of one of Australia’s greatest motoring characters, a man whose motto was “Don’t take yourself too seriously” and one who captivated the population with his mantra.

It’s a superb read and provides many a laugh.