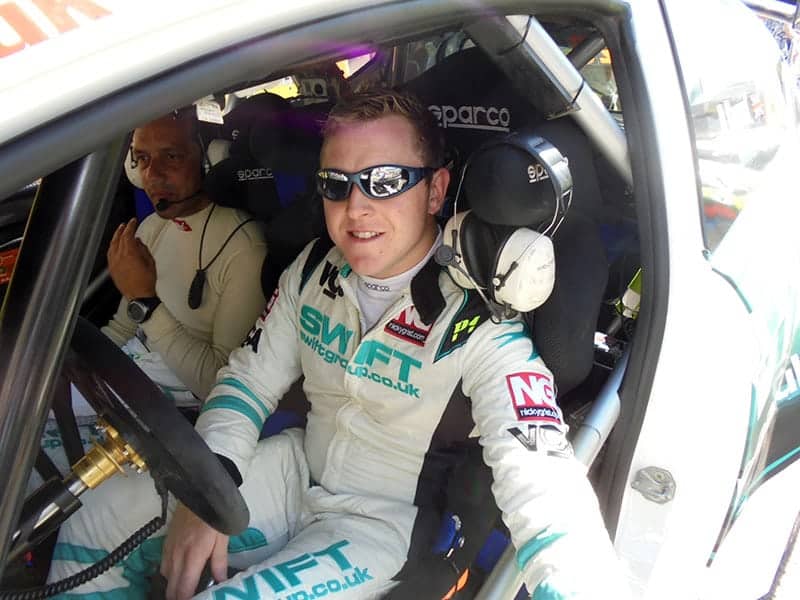 34 year old Matt Edwards clinched the MSA BRC at Wales Rally GB, on the BRC’s penultimate round, on home ground on stages in his native North Wales.

Son of a well-known local rally co-driver who later became the clerk of the course for the national Cambrian Rally, Matt started rallying in 2004.

Without his father’s knowledge he had invested his student grant in an Astra MkII and converted it into rally specification.

Matt entered a few local events before deciding to compete in the BTRDA Championship in 2007, still with his Astra.

To his surprise, Matt won the B8 class within the 1400 series and placed second in the overall 1400 series that included many 16 valve cars.

Those early years were especially tough with many rally nights spent under canvas (or in the car), eating frugally, and even doubling up as his own mechanic during rallies when friends or family could not help out.

His association with his longtime sponsor, the Swift Group, started in 2010 and continues to now.

In 2015, this time on an event when co-driving, Matt suffered his biggest crash to date. Their car impacted a tree during the Malcolm Wilson Rally, an event which counted for the amateur BTRDA championship event run in north west England.

Matt was airlifted to hospital, making a full recovery and after a few months was back in competition again.

This year Malcolm Wilson’s company, M-Sport, has prepared his car. Apart from competing twice on the BRC qualifying rally at Ypres, all Edwards’ competition to date has been in Britain.

This was the 60th year of the BRC, only three other British drivers have won Britain’s premier rally series in the last 10 years. These were Elfyn Evans and David Bogie, who this year was Edwards’ closest rival, and Guy Wilks.