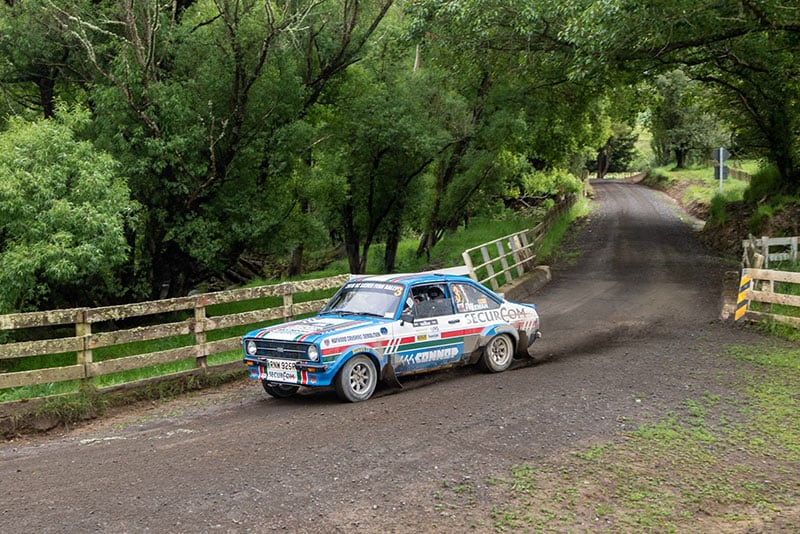 New leaders of the Silver Fern Rally are Brits Roger Chilman and Max Freeman in their Ford Escort RS1800.

Roger Chilman and co-driver Max Freeman (Ford Escort RS1800) from Great Britain are the new leaders of this year’s NZ Silver Fern Rally after another drama-filled day in the central North Island today.

Day 1 pace-setters Meirion Evans and co-driver Lestyn Williams from Wales started out the day in front again after early event leader Matthew Robinson and his co-driver Sam Collis ran off the road in their Ford Escort late yesterday afternoon.

However, after winning the first two stages and finishing a close second to Robinson and Collis in the third this morning, Evans ran wide through a corner in the fourth stage and got stuck in  a ditch.

While his car sustained only minor damage the effect the time penalty had on Evans’s hard-won-back event lead was immediate; Chilman – who bought the car Evans used to win the last Silver Fern Rally here in 2016 – taking over the lead of the Leg (4) and with it the overall event lead – which at day’s end in Palmerston North was just over 2 minutes from Robinson and  Collis.

Despite having to take an assessed maximum stage time (of 50 minutes cfm to Chilman’s winning one of 29-and-a-half) Evans and Williams remain third overall in the event standings, albeit over 13 minutes behind Chilman and  Freeman.

In a day of see-sawing fortunes throughout the field another front-runner to fall was Christchurch rally stalwart Jeff Judd who suffered a mechanical issue in the event’s longest stage, the 50.63km SS24 Papaiti/Rangotatau East one north-east of Whanganui.

Judd and Belgian navigator Stephane Prevot were running in second place, just a minute and-a-half behind Evans and Williams at the end of the third day. But after a close third in today’s opening stage, the 18.43km Oruakukuru south of Ohakune this morning their day was effectively done when their Ford Escort ground to a halt in the second stage.

Third in the Leg, but way back in the overall event standing thanks to not one but two serious engine bay fires, was German-born Kiwi all-rounder Peter Scharmach and co-driver David Jasko. Fourth was one of the other visiting British duos, Simon Tysoe and co-driver Paul Morris, in their Ford Escort, fifth and again the first non-Ford Escort pairing on the leader board, Kiwis Brad and Stuart McFarlane in their Porsche 911. 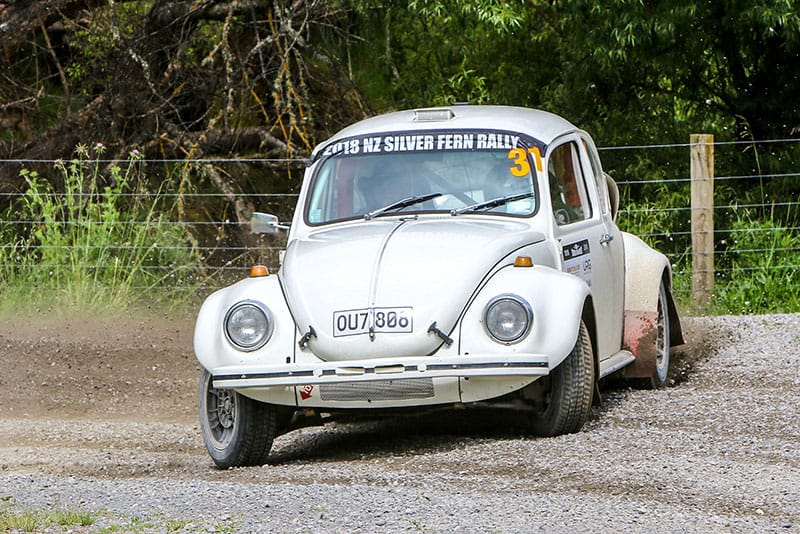 In fourth place in the overall event standings the McFarlanes are now the top all-Kiwi crew, though the ever consistent Ford Escort pair of Brent Rawstron and co-driver Ian McKee are less than half a minute back in fifth. By day’s end British pair Tysoe and Morris had also closed to with 40s seconds of the Rawstron Escort and were sixth overall but looking for further improvement tomorrow.

There was also a major change at the top of the Challenge class (for contemporary and/or modified historic cars) leader board today.

After issues on the opening day but two gloriously virtually trouble-free days leading from the front on Sunday and Monday, Charlie Evans’ Mazda RX7 blew not one but two diffs today. That effectively gifted the lead in the Challenge class to marathon rally rookies Mike Goldsbury and co-driver Dan Wallace on Goldsbury’s Toyota Corolla DX.

With their contemporary Toyota GT86 now running back on song after a throttle bracket broke early in the event Brent Taylor and Dave Neill are back up to second place, with the late model front-wheel-drive Honda Civic R of Dave Strong and Rob Scott third, and Evans and co-driver Andrew Hooker back in fourth – and looking at an all-nighter back at their Hamilton workshop to have the RX7 back in action in time for the final four days of an already memorable 2018 Silver Fern Rally event.

Tomorrow (Wednesday Nov 28) sees the NZ Silver Fern Rally field spend the morning completing a major mid-event service in Palmerston North before three stages north-east of the city in the afternoon then return for a second overnight stop in the city ahead of a full day again on Thursday and overnight stop that night in Havelock North.