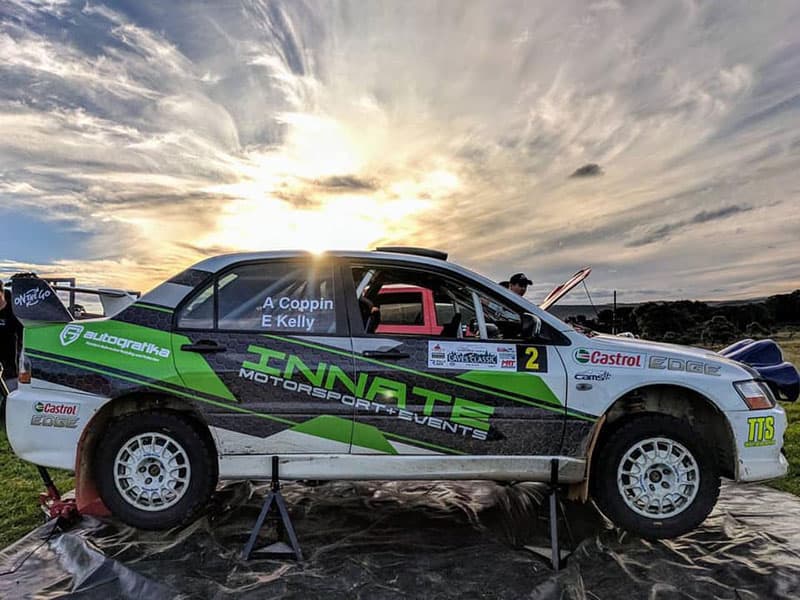 Innate Motorsport and Events’ Adrian Coppin will head into the National Capital Rally with no expectations, aside from enjoying the return to the Australian Rally Championship.

Entered into the one-day rally with a debut co-driver in Dare to be Different ambassador and Channel 10 presenter Kate Peck, Canberra will be Coppin’s one and only event this year, as he prepares for a bigger assault on the ARC in 2020.

In the corresponding round last year, Coppin guided a Skoda Fabia R5 to a brilliant second place alongside the experienced Glen Weston, however this year he won’t have the speed of the R5 behind him.

Despite being behind the wheel of an older Mitsubishi Evo with a co-driver with far less experienced than his previous partners, Coppin is just excited to get back in the car and compete, no matter the circumstances.

“It’s been a while since I last did a rally so I am looking forward to it,” Coppin said.

“I did pretty well here last year but it was in very different machinery and there is a big difference between the Skoda and my own EVO.

“We’re practically taking a knife to a gun fight, but essentially we’re just going to do some skids and see where we end up.

With the pair going on their first test run shortly, Coppin was confident in Peck’s ability to navigate after some solid preparation, which included time with Australian Motor Sport Hall of Famer Coral Taylor and other ARC regulars.

“Kate has had some time with Dale Moscatt who is one of the best co-drivers in the country at the moment, so now it’s just about applying her theory to the practical,” Coppin explained.

“We have had some drives together and she seems to be quite comfortable in the car getting thrown around so we now just have to see how she goes calling notes in that situation.

“We have no expectations for the event. We just want to finish and have a good time because it’s a big undertaking for both of us. It’s a big jump into the unknown.

“She is going to have her first run in the car so realistically we just want to have some fun. It’s great PR for everyone involved and it will be interesting to see how we will come out.”

The Netier Capital Capital Rally takes place on 11 May around the forests of Canberra and will be free for spectators to attend.