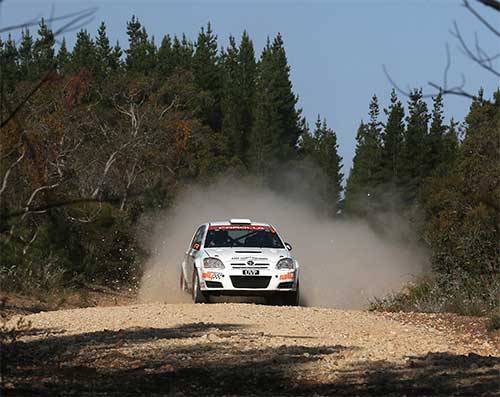 Despite retiring on just the fifth stage at Scouts Rally SA, Adrian Coppin says he’s incredibly enthusiastic about the move to four-wheel drive, and has exciting plans in the works for 2016.

“I wouldn’t have described it as even a weekend of rallying,” said Adrian. “We had a problem with the steering rack literally from the very first stage, and it just got worse from there.”

“We came here to test, that was the point of coming to the rally, and in the end it was what it was. On the plus side we got some more time in the car, as limited as it was, and we made some good (pace) notes for next year.”

The decision by Adrian to step out of his front-wheel drive Citroen DS3 and into an ex-Neal Bates Toyota Corolla Group N(P) was designed to give the Canberran driver a chance to run at speed in a four-wheel drive ahead of next season.

With the decision by the Australian Rally Commission (ARCom) to open up the outright category to include both two-wheel and four-wheel drives, Coppin says he’s looking very seriously at his all-wheel drive options.

“I think 4WD has to be the way to go for me for next year. If any of the other guys here, like Eli, Steve Mackenzie, or Molly, turn up in a 4WD next year and you’re still in a 2WD you’ve just got not realistic chance. So with that in mind it’s a pretty easy decision,” he explained.

“Also if some of the rumours are true about who is going to be turning up in a 4WD next year then it’s an exciting time to be involved and getting into a 4WD too.”

Coppin and his Innate Motorsport team were one of the biggest supporters of two-wheel drive rallying as the premier category, having campaigned an R2 spec Ford Fiesta for two seasons before spending the last two years in an R3 Citroen DS3.

“I think they tried the 2WD, and I was fully supportive of that, it just didn’t work out as well as anyone hoped. Ok, the variety of the field was actually pretty good, unfortunately the manufacturers just didn’t get behind it like we had all hoped.”

“You’ve got to go where the interest is though, and that seems to be 4WD, so it makes sense to go back to that,” Coppin added.

But having spent so many year’s in a front-wheel drive rally car Coppin is aware that he has a lot to learn ahead of next season to be competitive in a four-wheel drive.

“Everyone always told me if you can drive a 2WD fast, then you’ll adapt quickly to a 4WD, and so far I’d agree with that. You definitely learn to drive neatly to drive quickly in a 2WD and I can see where that’s helping me in a 4WD.”

“It’s still a lot to get used to, I think the most obvious is the weight difference between the Citroen (DS3) and the Corolla. Also the brakes, they were so good in the Citroen compared to what is a full Group N car. A lot still to get my head around,” he admitted.

And so what is his plan for next year, to stay in the Group N(P) Corolla or update to something slightly more current?

“I’m still waiting on the finalization of the rules, but I have a very strong idea about what I’d like to do and it’ll be a really good thing. I can’t wait to get the ball rolling on that front!”