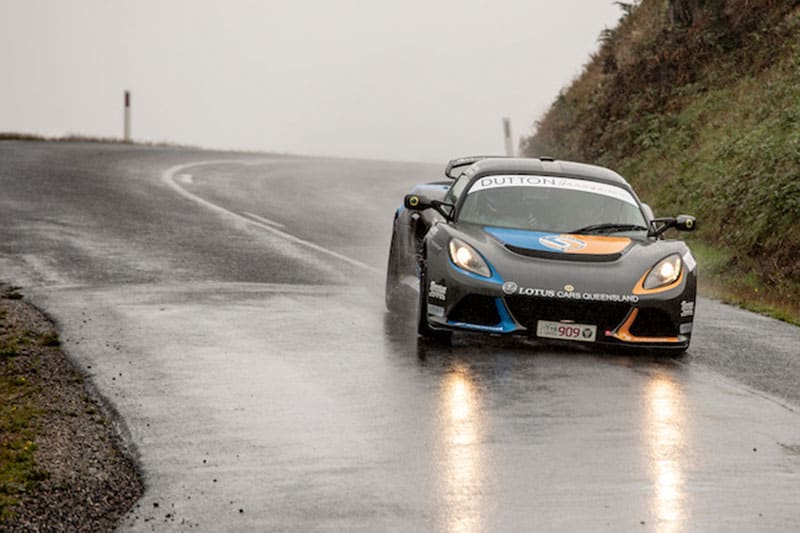 Former Tasmanian Paul Stokell has survived a day of high drama to claim the outright lead of the 28th Targa Tasmania.

Stokell and co-driver Kate Catford are mastering a battle against more powerful machines in their agile and lightweight Lotus Exige 350 Sport.

The Queenslander and former Australian circuit racing champion has sprung to a 57 second lead over Matt Close and Cameron Reeves in their Porsche GT3 RS in the race for outright and Dutton Garage GT2 honours.

Angus Kennard and Ian Wheeler (Nissan GTR R35) are a further 33 seconds back in third and leading the GT4 class.

The longest day of the event so far, with more than 130 competitive kilometres over six stages, saw dreams dashed as the weather closed in across the north-west corner of the state.

Michael Pritchard and Gary Mourant were looking solid in second outright before slipping into a barrier on the shortest stage of the day (TS17 Castra) in the morning.

Then Close and Reeves experienced electronic glitches in the transmission of the Porsche GT3 RS, hampering their run and thwarting their effort to protect their overnight lead.

“We came to a halt when we had some electronic gremlins,” Close said.

“We only lost 30 seconds, but then we came past Michael Pritchard’s crash and that was a wake-up call for me, so we decided to take it a little quieter in the afternoon.”

Wet and foggy conditions conspired to throw the opening stage on Day 4 (37.7km Cethana) into chaos with a spate of crashes and stoppages.

Caught up the drama was Stokell with electrical problems.

“We wriggled a few things and it reset itself,” Stokell said. “So other than that, it’s been a good day.

“We’re only just over the halfway mark, so I’m not getting too excited about being in the lead.

“The car’s been good and I like the wet, so bring on a bit more of the same and I’d be quite happy.”

The dream run for the open-wheel 1941 Jimmy Special of Graham Copeland and Josh Herbert came to an end on the Riana stage before the field made it into the lunch stop at Burnie.

“We had a red hot go at Cethana and then on Riana the front engine oil seal popped out so we stopped on the side of the road,” Copeland said.

“Poor old Josh (co-driver Herbert) was really struggling in the rain. I don’t know whether our pace note book would have lasted the day. It was getting drowned but we were still hunting along pretty hard.”

The war between the Australian 1970’s muscle cars continues in Shannons Classic GT with Mick Downey and Nicholas Browne holding sway by 30 seconds.

Michael and Daniel Bray have fought tenaciously all day in their 1975 Holden Torana.

“We’ve been battling with Mr Bray all day,” Downey said.

“I caught him in Riana (TS 19) and the red mist descended and I tried to pass him instead of listening to the notes.

“But I know he doesn’t like the long wet stages, so we were able to get a bit of a gap on him.”

In the Trophy classes, Country Club GT Sports sees Steven Sher and Fergal Murphy (Lotus Exige) up on Tony and Sandra Seymour in another Lotus while Tyson and Celise Cowie (Ford Escort Mk1) have pounced on the lead in the Shannons Thoroughbred Trophy.

The race for honours in TSD Trophy has tightened up with Darryl and Peter Marshall (2002 Ford Falcon Pursuit Ute) on 22 points with Peter and Tristan Taylor (2013 Lotus Elise S) just three points further back.

Adam Garwood and Reubecca Sheldrick (Porsche GT3) have enjoyed a solid day, bouncing back to the lead in Spirit of Tasmania Rookie Rallye from Kristian Downing and Richard Woodman’s Subaru WRX STI.

Action continues tomorrow with six stages leaving Strahan and highlighted by the monster 53 kilometre Mt Arrowsmith run as the field makes its way south towards Hobart. The rally concludes on Saturday.