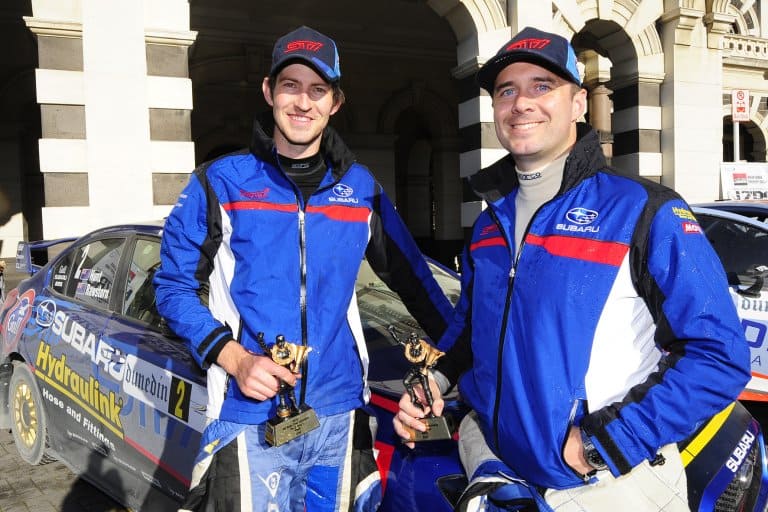 Ben Hunt could wrap up the Brian Green Property Group New Zealand Rally Championship at this weekend’s fourth round in South Canterbury.

The Subaru driver could secure his second career championship should he make it four wins on the bounce and if closest rival Josh Marston finishes outside the top four at Stadium Finance Rally South Canterbury.

Hunt has dominated the championship so far – his pure speed has been better than anyone else while he has been ultra-consistent as well, taking victory at Otago, Whangarei and Canterbury to hold a commanding 42-point lead heading to Timaru.

Marston has been the closest to Hunt all season as he has demonstrated improved speed in his Holden Barina AP4. The Cantabrian remains the only driver with a realistic chance of over-hauling Hunt this season.

Phil Campbell (Ford) and Matt Summerfield (Subaru) have shown good speed at times this season and will look to push for a rally win while Emma Gilmour returns after missing Canterbury and hopes to have solved the over-heating issues that have plagued her season to date.

Job Quantock (Skoda) picked up an impressive podium at Canterbury three weeks ago and will get the chance to back that up on the lightning-fast roads of South Canterbury while the season-long battle between youngsters Dylan Thomson (Subaru) and Jack Hawkeswood (Mazda) will continue.

Skoda pair Raana Horan and Kingsley Jones will look to take a step forward after solid results at Canterbury three weeks’ ago.

The overall 2WD category has been dominated by Marcus van Klink’s Mazda RX8 but he will be pushed hard this week by a bevvy of Ford Escorts. Regan Ross, Anthony Jones and Wayne Pittams have all shown good pace at various stages and should be right with Van Klink on the faster roads.

Four-time NZRC champion Bruce Herbert (Mitsubishi) will also be in the mix.

Robbie Stokes will look to close the gap to Mike Sheehan in the FIA Group N 2WD battle.

The very competitive Gull Rally Challenge 4WD battle will continue with Ben Thomasen (Subaru), Garet Thomas (Subaru), Matt Adams (Mitsubishi), Sean Haggerty (Subaru) and Eugene Creugnet (Mitsubishi) all having moments where they have looked the driver to beat this season.

Veteran driver Jeff Judd has made the switch to Gull Rally Challenge 2WD for South Canterbury and will battle Andy Martin (Mazda RX3) and Daniel Alexander (Toyota Starlet) in that class.

Matthew Wright (Subaru) took a commanding victory in the Stadium Finance Group A Challenge at Canterbury and will look to hold off championship leader Phil Collins (Audi) and Wayne Muckle (Mitsubishi) this weekend.

The rally begins with a ceremonial opening in downtown Timaru on Friday night before competitors head off for 12 special stages across Saturday, including a finale at Levels Raceway.