Justin Dowel, Mike Conway and Ron Bustard were the big winners in the fourth round of the RXAus Australian RallyCross Championship, held at Winton Raceway.

Justin Dowel took the RXAus honours at Winton Motor Raceway.Justin Dowel won the All-wheel-drive class with an imperious performance in both the class final and SuperFinal, winning feature race ahead of son Troy Dowel and Steve Glenney.

The Victorian also enhanced his championship prospects, thanks in part to his winning ways in part to a non-start in the finals for nearest rival Will Orders.

The Mitsubishi driver was forced out after the final heat race with a broken diff mount following earlier contact.

Troy Dowel’s second place represented his best performance in RXAus yet, while Glenney held out Darren Windus for the final spot on the podium.

“The track was so fast and it just rewards full aggression, and I think that’s how we drove today.

“The championship is coming together well. The racing between Will and I was great – I was happy because I still set the fastest lap.

“I’m so grateful that Winton went to the effort that they did. They’re fully committed to getting us back here and it’s only going to get bigger and better, no doubt about it.”

Troy Dowel said he was pleased with a strong weekend – one that has him second in the AWD class standings heading into the final two rounds. He also won the Junior class.

“The track was awesome. I was really happy with how I was going this weekend. I had some problems and bad luck early in the weekend but overall I think it was a really good weekend to grab second, and hopefully we can repeat that next time.

“I wasn’t expecting out of the SuperFinal and just tried my best!”

Mike Conway prevailed in a dramatic 2WD SuperFinal, a race that was red flagged after four laps or the scheduled six laps when Arron Windus crashed heavily just prior to the left hander in Winton’s RXAus dirt section.

The young Melbourne-based driver was working his way through the field, having started from the back row of the grid in his Mazda 2.

Windus was running side-by-side with Richard McNay’s Holden ute when he ran wide, dropping off line and impacting the tyres at speed. Though the car suffered heavy front end damage, Windus emerged unscathed.

The race was called after four laps, with Conway declared the winner ahead of Troy Dowel and Ashlea Bright – Conway extending his championship in the process and Dowel securing second in both the all-wheel-drive and two-wheel-drive classes this weekend.

“I’ve grown up racing at Winton so it was great to come here for the RallyCross. The track really suits our car so we can use all the horsepower, especially once some of the slippery stuff was washed off a bit,” Mike Conway said.

“There’s four of us on a similar pace in 2WD, and the competition has doubled, so it’s really good.” 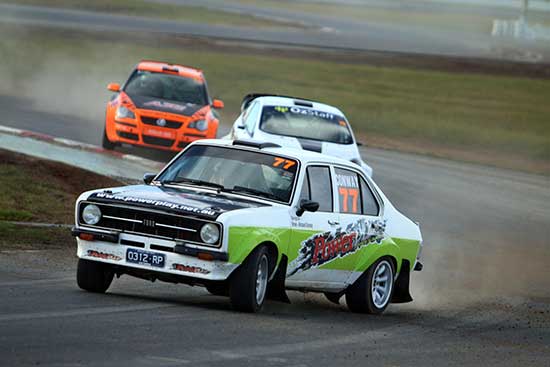 Mike Conway led all 2WD challengers in his Ford Escort.Ron Bustard and Hayden Taylor battled for the Excel Cup SuperFinal victory, though it was championship leader Bustard who ultimately prevailed.

Taylor took the joker lap earlier in the race but was unable to make up the track position on Bustard – who jokered late – and ultimately had to settle for second. Kelvin North finished third.

Justin Dowel won the 4WD Group 1 final comfortably, after Will Orders was ruled out of the race after his car broke a diff mount – following contact with another car - during the third round of heats. Steve Glenney and Darren Windus battled over second place, the Mitsubishi driver getting home.

An inspired performance from Troy Dowel saw the teenage Victorian lead from lights to flag in the 4WD Group 2 final, leading Jamie Sargent home to the line in a dominating drive moments after jumping out of his 2WD car. Aaron Bowering finished third in his Subaru.

Richard McNay’s Holden Ute battled Braeden Hendrick’s VK Brock Commodore for the honours in the 2WD Group 2 final, the Ute slipping past on the Joker lap to grab a narrow win.

Arron Windus dominated the 2WD Group 3 final, having powered this way through both of the earlier heats. Cody Richards (Escort) and James Rooke (Corolla) were second and third, respectively.

RXAus organisers enjoyed a successful debut at Winton Raceway with intentions clear from both parties to return to the circuit in 2018.

The next round of the 2017 RXAus Australian RallyCross Championship will be held at the Marulan circuit in New South Wales on Sunday, 13 August.