Pastrana (right) and stand-in co-driver Dorman.First of all Travis Pastrana’s British co-driver, Robbie Durant, had to withdraw after the first day because of a back injury, and Pastrana then enlisted team member, Grzegorz Dorman, as his co-driver for Day 2, a move allowed under American Rally Association rules.

On the penultimate stage of the rally, Pastrana’s teammate, David Higgins, impacted a track side boulder, damaging the rear suspension and causing the right rear upright and wheel assembly to fail.

Unknown to them, Pastrana and Dorman also impacted their rear suspension, possibly on the same rock, their car damaged, but to a much lesser extent.  With one stage to run, only a one single second separated the two cars. 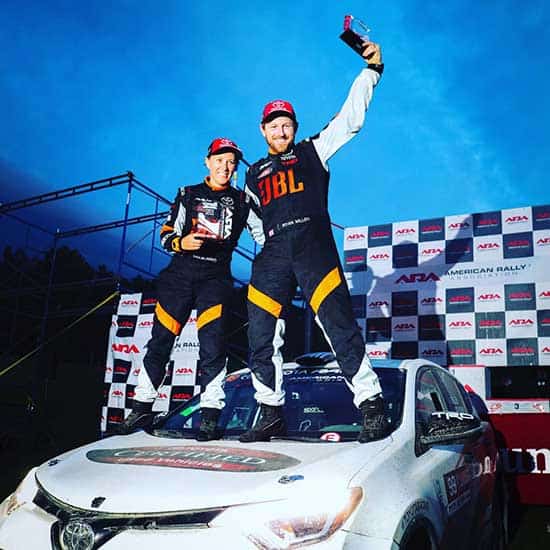 Ryan Millen and Aussie co-driver Rhianon Gelsomino.Higgins’ car could not be fully repaired in the allotted 30-minute service, and he left service with only front wheel drive.  They lost considerable time and Pastrana won by over a minute.

The inaugural ARA series will now be decided at the sixth and final round at the Ojibwe Forests Rally in Minnesota at the end of August.