There will be serious competition ahead when the legendary Acropolis Rally returns to the FIA European Rally Championship roster for the first time in almost 50 years next week (28-30 March).

While event base Loutraki on the banks of the Gulf of Corinth will be familiar to many, the switch to a mixed-surface format marks a return to past glories when sealed-surface sections were combined with the punishing gravel tracks that remain entrenched in Acropolis Rally folklore.

Day one of the Greek event (Saturday 29 March) will use Tarmac stages only with day two (Sunday 30 March) made up by the event’s more traditional gravel stages, with the exception of the all-asphalt superspecial in the town of Korinthos.

The change of format for the 60th running of the Acropolis Rally is the result of the event’s earlier-than-usual March date. To counter the prospect of some of the more mountainous gravel stages becoming unusable in the event of heavy rain or snow, organisers have added an all-Tarmac opening leg to the itinerary. This will be less susceptible to inclement weather, thereby avoiding the risk of stages having to be cancelled if conditions deteriorate.

Following Friday afternoon’s Qualifying Stage, which will be used to help determine the starting order for the ERC and FIA priority drivers, Saturday’s route takes in two loops of three high-speed asphalt stages south of Loutraki. At the completion of leg one, teams get 90 minutes to service their cars and convert them to gravel specification for the loose-surface second leg, which takes in two loops of gravel tests south and east of Loutraki, plus the all-asphalt Super Special Korinthos. Tyre engineers from ERC partners Michelin, Pirelli and Yokohama will be in attendance during the rally as they monitor the performance of their respective products on the first mixed-surface ERC qualifier of 2014.

As well as counting as round three of the overall ERC, ERC Production Car Cup and ERC 2WD Championship, drivers will be able to score ERC Asphalt Master points on leg one and ERC Gravel Master points on leg two as part of a new initiative for this season to recognise the achievements of surface specialists. In addition the event qualifies for the Greek national championship.

R5 era gets another boost
While the M-Sport Ford Fiesta R5, of which 50 have now been completed, is already a winner in the ERC, Peugeot’s 208 T16 will make its first competitive start in the championship in Greece having been trialled on last year’s Geko Ypres Rally. Kevin Abbring and Craig Breen will drive a brace of 208 T16s for Peugeot Rally Academy and will go up against the Fiesta R5s of Kajetan Kajetanowicz and Jourdan Serderidis.

Heroes return to ERC action
ERC event winners Bryan Bouffier and Bruno Magalhães will both be in action on the Acropolis Rally. Bouffier, in a Citroën DS3 RRC, will be gunning to avenge his early exit from Rally Liepāja last month, while Magalhães (Peugeot 207 S2000) is gearing up to tackle his first event away from Portuguese soil since 2011.

Emerging talents aim to build experience
Promising ŠKODA Fabia drivers Sepp Wiegand and Henk Lategan are among a number of Acropolis Rally entrants tackling the event for the first time. Wiegand, who competes under the ŠKODA AUTO Deutschland banner, was a strong fifth on his first ERC start of 2014 in Latvia last month, while Lategan is embarking on only his fourth event outside of his native South Africa having made his ERC debut in Croatia last season. The teenager is also teaming up with new co-driver Klaus Wicha for the first time.

Czech mates in the ERC
There will be a total of four drivers from Czech Republic contesting the international section of the Acropolis Rally. The quartet is Martin Hudec, Jaroslav Orsák, Jaromír Tarabus and Antonín Tlusťák. In addition to Bryan Bouffier, Robert Consani and Jean-Michel Raoux will be flying the French flag on the Greek event. Meanwhile, the Acropolis Rally will mark Italian Giacomo Costenaro’s ERC debut.

Class battles to be a highlight in Greece
The ERC Production Car Cup has attracted six entries with Mitsubishi Lancer pilots Vitaliy Pushkar, Tibor Érdi, Charalambos Timotheou and Martin Hudec among the leading contenders. ERC Ladies’ Trophy ace Ekaterina Stratieva will also be eligible for class points following her step up to a Subaru Impreza on Rally Liepāja. Ioannis Zounis from Greece is another driver relying on Subaru power.

Honda Civic Type R exponent Zoltán Bessenyey will face opposition from Alex Filip, Todor Slavov and Simone Tempestini as he bids to get his ERC 2WD Championship defence back on track following his leg-one retirement on the season-opener in Austria. Filip and Slavov are both armed with Renault Clio R3s, while Tempestini is Citroën DS3 R3T mounted. 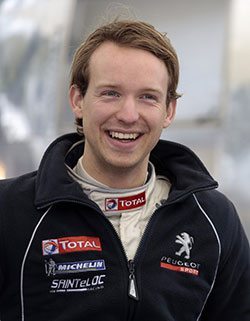 Before we talk about your exciting new car, how good does it feel to be back at international level?
“It feels good to be back of course. My last year competing internationally was in 2012 when I did not have so much luck. After that I could no longer stay in the [WRC] game so I took a risk and drove in the 208 Rally Cup in France. But it really helped because the prize is to drive the 208 T16 in the ERC. Also, the level was high, I’d never driven an R2 car before and every rally there was pressure because if I didn’t do my job I knew it would be difficult to continue. But I am back doing six rallies in the ERC, which is very good with Eurosport promoting it. Also, I have a brand-new car and although we don’t quite know where we stand at the moment it’s very exciting.”

You mentioned the car, what do you think of your new Peugeot 208 T16?
“We did some testing together with Craig and we worked well together. I appreciate him as a driver and as a friend. When we compare things we try different things and combine the knowledge to set up the car well. I haven’t been driving the car yet on asphalt but we will do a test before the rally and every metre is welcome, because the speed difference compared to the R2 is really huge. I can adapt to a new car quite easily but the difference in speed to adapt the pacenotes is the most difficult thing.”

And you will have a new co-driver in Sebastian Marshall to read your pacenotes…
“I wanted to switch to English pacenotes and I think he’s the right guy. I trust him and we get along well. Not only is it a new car, it’s a new co-driver as well but we need to start somewhere. We just need to focus on ourselves and find the rhythm to do well in the future.”

The Acropolis Rally has a reputation for being a tough event. Do you agree?
“The good thing is at least the Tarmac on the first day is new for everyone. As we have seen before when I was in the JWRC in Ireland and Poland when the rally was all new, I set the fastest times on nearly every stage. Okay, this will be different now because the R5 is really new for me. The rally will be rough when it goes to gravel and you wait for the big stones. It’s about surviving but the cars won’t be weak.”

What do you look to achieve in Greece?
“It will be hard to keep up with the pace of the fastest drivers from the beginning because I won’t have the rhythm, and that’s because I haven’t been driving a four-wheel-drive car for at least a year. I just want to show the potential of the car throughout the rally and the potential of myself. It’s hard to say where we will stand against the others and particularly the Regional Rally Car of Bryan Bouffier.”

FIVE FACTS
*Mixed-surface events are nothing new for Greek rounds of the ERC: the ELPA Rally used routes consisting of asphalt or gravel or a combination of the two in the past.
*British hero Roger Clark won the last Acropolis Rally to count for the ERC when he took his Ford Escort to victory in 1968, one year after Paddy Hopkirk triumphed in a Mini Cooper S.
*The late Colin McRae, who is honoured on each round of the ERC with the presentation of the Colin McRae ERC Flat Out Trophy, has won the Acropolis more times than any other driver with five victories to his name.
*Haris Kaltsounis will set a new record when he starts the Acropolis for the 31st time this year. The Greek driver, 65, is competing in an Opel Corsa Super 1600.
*The Peloponnese peninsula where the rally is based is effectively an island following the completion of the Corinth Canal in 1893, not that it’s ever referred to as such.