ERC Ice Master to be crowned in Latvia

A strong 51-car entry made up of drivers from 20 countries will contest round two of the 2015 FIA European Rally Championship next week, as the ice and snow-covered roads of Latvia play host to Rally Liepāja.

In addition to the six R5 and five Super 2000 cars that will be gunning for overall glory, an exciting 16-car field will begin the eagerly awaited second ERC Junior Championship. The class for drivers born on or after 1 January 1988 competing in R2 cars on Michelin tyres has struck a chord with young stars across Europe, with drivers from nine countries and cars from Citroën, Opel and Peugeot on the starting line in Latvia.

Craig Breen.After a successful debut in 2013, this will be the third time Rally Liepāja has hosted a round of the ERC. It’s a gruelling winter rally, with daytime temperatures between -5°C and -15°C, night-time temperatures nearer -30°C, and a ferocious wind-chill thanks to the proximity of the Baltic Sea.

The itinerary will give competitors a sweat, with 12 stages totalling 205.68 kilometres in the wintry Liepāja and Kuldīga regions. After the Qualifying Stage on Friday 6 February, which will help determine the start order for leg one among the FIA and ERC priority drivers, Rally Liepāja gets underway at 09h30 the following day. The opening leg contains five stages – including two runs over Kuldïga, which at 36.97 kilometres is the longest stage of the event. After 114.13km of competition a much welcome overnight halt will prepare crews for the final day of action on Sunday 8 February, where seven more stages (totalling 91.60km) will take place. The final stage will be a new super special city stage in host city Liepāja, before the finish ceremony in nearby Rožu Square at 16h20.

Potential winners aplenty on ERC Rally Liepāja
Predicting a Rally Liepāja winner is impossible, such is the quality at the sharp end of the field. There’s no doubt that an on-form Kajetan Kajetanowicz (LOTOS Rally Team Ford Fiesta R5) will be a frontrunner following his dominance on round one in Austria, where he set fastest time on all but one stage in his Pirelli-shod car. The Pole could only finish fourth in Latvia last year, however. Robert Consani proved that the Peugeot 207 S2000 is a highly competitive car in the right hands, and another podium is within his capabilities. Alexey Lukyanuk (Chervonenko Racing Fiesta R5) came from 23rd position after problems on the opening stage to finish third in Austria – a feat that earned him the first Colin McRae ERC Flat Out Trophy of 2015 and sent a warning shot to all his rivals. Lukyanuk won the same award in Liepāja in 2013.

ERC2 heats up in Latvia
Vojtěch Štajf takes a nine-point ERC2 lead into Rally Liepāja, courtesy of the Subaru Impreza WRX STI driver’s commanding victory in Austria. Krisztián Hideg had been leading the class for R4 production cars on the Jännerrallye when he crashed out. He returned under Rally 2 rules and set eight fastest stage times compared to Štajf’s nine, so the two appear evenly matched as they head to more snowy stages. Dávid Botka, lying second in ERC2, will be looking for another good run in his Mitsubishi, while former Lithuanian champion Dominykas Butvilas steps up from the Polish championship with backing from the company’s Subaru importer. Local hero Jānis Vorobjovs won this class in Latvia last year and returns aiming for back-to-back victories, as does fellow Mitsubishi driver Siim Plangi, who was excluded from the lead in 2014. Polish duo Łukasz Kabaćinski and Tomasz Kasperczyk will also be in the fight for strong class points. 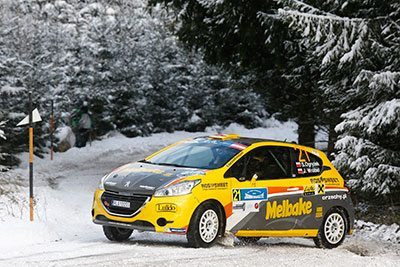 Slawomir Ogryzek in his Peugeot 208.Latvia-bound giant-killer Ogryzek aims high again
Sławomir Ogryzek finished an impressive 11th overall in Austria, dominating the ERC3 class for R1, R2 and R3 cars in his Peugeot 208 R2. The Pole will be looking for another class win this time to extend his early lead. Hungarian teenager Kristóf Klausz will have a great chance to move up the ERC3 leaderboard in his Renault Clio R3, as will Grzegorz Sikorski (Honda Civic Type R). Ondřej Bisaha will be keen to avoid a repeat of Austria, when two tractors had to rescue his Renault Clio R3 from a snow bank – although his speed on day two showed that he is a potential ERC3 winner. Both Aron Domzala (Citroën DS3 R3T), a former Junior WRC contender from Poland, and Russian Mikhail Skripnikov (Renault Clio R3) will be keen to get their first points on the board. All 16 ERC Junior contenders (see below) will also be eligible for ERC3 points.

ERC Junior field let loose on Latvia season-opener
A mouth-watering 16-car field will begin the ERC Junior Championship in Latvia, with a depth of young talent making it tough to pick a winner. Certainly triple Latvian R2 champion Ralfs Sirmacis will be a strong contender in his Sports Racing Technologies (SRT) Peugeot 208 R2, as will team-mate Vasily Gryazin. He finished second overall on Rally Liepāja last year driving a Ford Fiesta S2000 but switches to ERC Junior for 2015. Steve Røkland (208 R2) led ERC Junior in Latvia last year before crashing out, but the Norwegian hopes his experience of the wintry conditions will help him win this time. ADAC Opel Rallye Junior Team duo Marijan Griebel (Germany) and Emil Bergkvist (Sweden) will both be strong in their Adam R2s, while double Swedish R2 champion Mattias Adielsson starts his first ERC campaign in a 208 R2.

Promising Portuguese Diogo Gago won the junior section of the 208 Rally Cup in France last year and, like 2014 ERC Junior champion Stéphane Lefebvre before him, takes up his prize drive in ERC Junior. Britain’s Chris Ingram is the youngest driver ever to win the Colin McRae ERC Flat Out Trophy (2014 Circuit of Ireland) and returns to the ERC in a Peugeot UK-backed 208 R2. Poland’s Aleks Zawada has swapped his 208 for an Opel Motorsport-supported Adam R2 and following two podiums last year hopes to be a title challenger. Countryman and Silesian regional champion Łukasz Pieniążek (208 R2) is hoping that a recent training visit to John Haugland’s world-renowned Winter Rally School in Norway will help him in Liepāja.

Rainer Rohtmets started rallying in 2007, and with almost 50 events under his belt the young Estonian driver hopes his experience will pay dividends in his Printsport-run Citroën C2R2 Max. RACB National Team driver Gino Bux makes only his 10th rally start – and his first on snow – as the young Belgian’s second season of competition starts in a Peugeot Belgium Luxembourg-entered 208 R2. Having previously rallied the likes of a Ford Fiesta R5 and Subaru Impreza, Wojciech Chuchala will drive a 208 R2 this year, while Julius Tannert enters an Opel Adam R2. Completing the list of rising stars will be Guillaume de Mevius (Belgium) and Northern Ireland’s Jon Armstrong – both will drive 208 R2s. Visit the Media Lounge section of Fiaerc.com for pre-event quotes from all ERC Junior drivers.

Latvian rallycross star set for ERC debut
Latvian rallycross sensation Reinis Nitišs will make his rally debut in Liepāja driving a Ford Fiesta R2 prepared by Latvian team Sports Racing Technologies. The 19-year-old from Jēkabpils finished third in the Supercar category of the FIA World Rallycross Championship in 2014, driving a World RX-spec Fiesta. His coach and co-driver will be Latvian rally champion Māris Neikšāns. “Rally has a lot of unpredictable situations and the road surface can change at any second – this will help to develop my driving skills as I adjust to the varying conditions,” says Nitišs. “My goal is to drive all the special stages in order to fully use the opportunity to learn and improve. In this rally I will not be fighting for the win, I will be in a fight with myself as there will definitely be situations that I will not have experienced before as a pilot.”

Snow debut for ERC returnee Costenaro
Giacomo Costenaro will begin his ERC campaign on Rally Liepāja – the Italian’s first event on snow. Costenaro, who is co-driven by Justin Bardini and recently celebrated his 26th birthday, will drive a Delta Rally-prepared Peugeot 207 Super 2000. “For me rallying on snow is completely new and it will be a big challenge,” he says.

ERC registrations reach half-century
More than 50 registrations have been received for the 2015 ERC and that number is set to rise based on the current level of interest from drivers and teams. There are several benefits to registering such as receiving priority status, being eligible for the round-by-round prize fund, having access to the ERC Village in service parks and an attractive media package. Visit Fiaerc.com for more details.

Privateers aim for share of 200,000 Euro prize fund in the ERC
Another 20,000 Euros will be shared between the seven most successful privateers on Rally Liepāja as part of ERC promoter Eurosport Events’ 200,000 Euros total prize fund for this year. Kajetan Kajetanowicz received the biggest cheque in Austria for 7000 Euros after securing victory and maximum ERC points to boot. To be eligible, drivers must register for the ERC, receive no manufacturer support*, use tyres from one of the three ERC partner companies (Michelin, Pirelli and Yokohama) and not compete in a Regional Rally Car. *Eurosport Events will determine privateer status in consultation with the manufacturer in question.

Advantage Kajetanowicz in ERC Ice Master
Kajetan Kajetanowicz not only leads the ERC standings following his victory on round one – he also tops the ERC Ice Master classification heading into the second and final scoring opportunity of the season. The LOTOS Rally Team ace bagged 176 points after he won all but one stage on the Internationale Jännerrallye powered by GaGa Energy earlier this month. Starting Rally Liepāja, he holds a 76-point advantage over fellow Ford Fiesta R5 driver Alexey Lukyanuk, who took one stage best in Austria and 100 points. Jaromír Tarabus scored 56 points, Robert Consani 49 points, Stéphane Lefebvre 17 points, Craig Breen 11 points, Martin Fischeriehner three points with Jonathan Hirschi and Hermann Neubauer each taking one ERC Ice Master point. Along with the ERC Asphalt Master and ERC Gravel Master awards, the ERC Ice Master recognises the performances of surface specialists competing in the ERC. Points are awarded for each stage run on a scale of 10-6-4-2-1.