Back in the late 1980s and early 1990s, the newest event on the World Rally Championship quickly established itself as an innovator, and set standards that have perhaps never been bettered since.

Rally Australia burst on to the WRC scene in 1989, and over the coming years the Langley Park Super Special Stage and the stages in the Bunnings Forest Complex, south of Perth, became legendary the world over.

We’ll look closely at Langley Park some other time, but for a real rally fan, spectating simply didn’t get any better than a day at “Bunnings”. The complex featured an area large enough to base the entire service park, with three stages starting and finishing all within easy walking distance. By walking less than a kilometre, rally fans could watch high-speed corners, low speed corners, big jumps and a spectacular water crossing in the surrounds of a natural amphitheatre that was perfect for spectators. The area provided a full day of rally viewing, all in the one location. 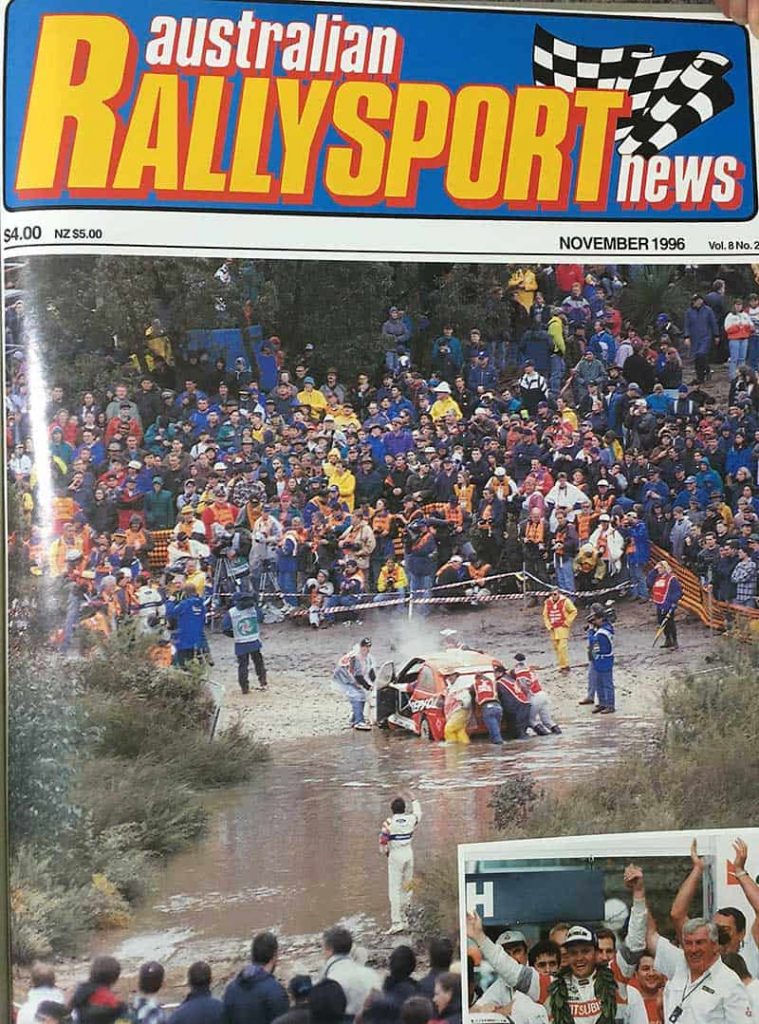 There’s probably not a rally fan that hasn’t seen spectacular images of Colin McRae launching his Subaru Impreza over the two big Bunnings jumps, before sliding sideways through the watersplash and up the hill to the finish line. Such images are now as iconic as cars sliding their way over Monte Carlo’s Col de Turini, or flying over Finland’s Ouninpohja jumps. 1996 provided some of the most memorable Bunnings images, with heavy rain on the day of the rally swelling the water crossing to a level higher than it had ever been before.

As spectators arrived and took their vantage points to watch the action, the water level was literally rising before their very eyes. The anticipation that something special was about to happen gained momentum.

As a treat for spectators in 1996, touring car legends Peter Brock and Dick Johnson were given a Commodore and a Falcon to drive through the famous Bunnings stage before the rally cars, helping to get the crowds ready for the real action when the WRC stars hit the stage. While Johnson managed to cross the ford in his Ford, Brock’s Holden was left stranded, much to the delight of the hundreds of onlookers. The volunteer marshals weren’t as impressed, as they were forced to wade into the swollen creek to push Brock and his Commodore onto drier ground. 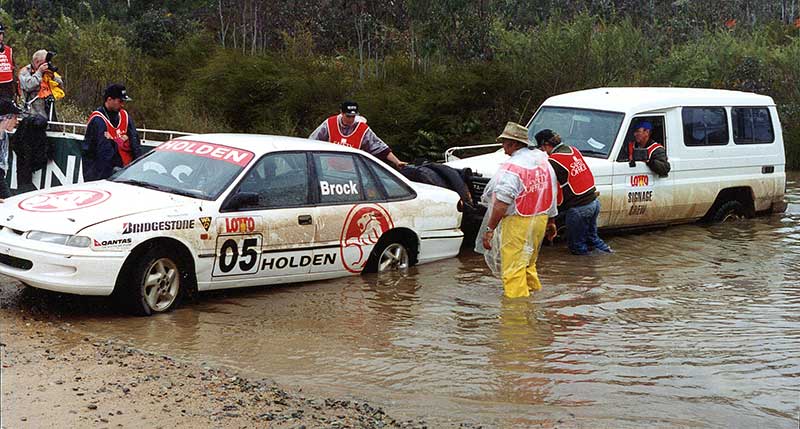 Peter Brock's standard Holden Commodore was the first casualty, and a sign of things to come.

But it was once the real action started that things really got interesting. While Tommi Makinen made it through unscathed, Colin McRae wasn’t so lucky, and the sight of his father, Jimmy, knee deep in water as he pushed the stricken Subaru out of the crossing is one that is etched in many memories. When Carlos Sainz’s Ford Escort ground to a halt, co-driver Luis Moya waded across the water (with no regard for his expensive overalls) to warn fellow competitors that the water was too deep to traverse.

From then on there was complete chaos. The road immediately after the crossing resembled a car park for dead WRC cars, while those drivers who didn’t dare to chance their luck parked their cars on the entry to the ford, wondering what to do next.

The stage was (literally) awash with cars, drivers, co-drivers, team managers, mechanics and photographers as everyone tried to make sense of the situation. Bewildered spectators could only watch on, wondering what to make of it, and what would happen next. 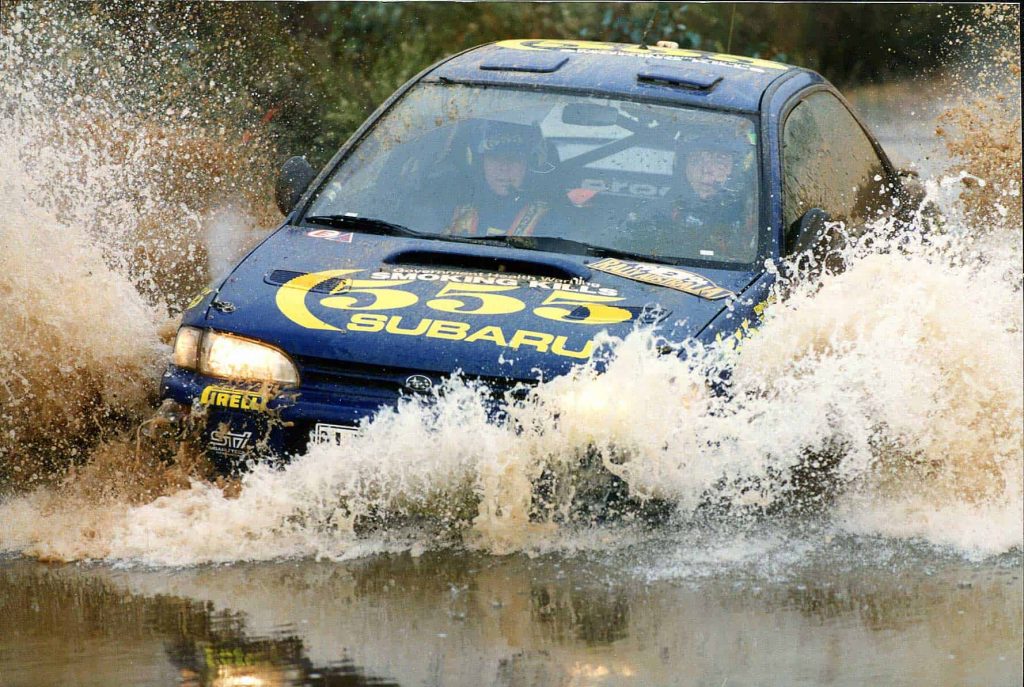 Kenneth Eriksson breaches the ford in his Subaru Impreza WRX.

For those of us who were there and wandering amongst the cars, it was something quite surreal, and something that, surely, we’ll never witness again. Our event report from November 1996 included the following explanation: “McRae once again had a bad day, forever choosing the wrong tyres for the conditions which had turned nasty, with constantly falling and the ground very soft.

The rainfall did nothing to help the marshals at the Bunnings forest complex, who worried about the height of the water at the famous ford, which two different stages were to use.

The excitement came at the first of the water crossings. Making, winner of this year’s Safari, could see the risks and took to the water remarkably gently, and came through to the other side under his own power. 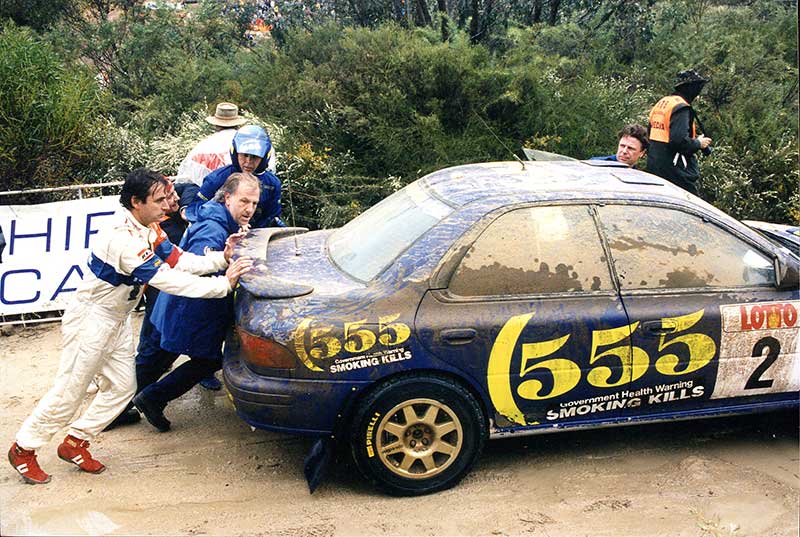 Subaru and Prodrive boss, David Richards, was on hand to help get his stricken cars moving.

Then came Sainz with more speed and stopped, having to be pushed to the other side with a dead engine. Then the same for Eriksson and McRae, but the Scot then restarted the engine and drove out past the others to the end of the stage.

News travelled fast, and suddenly there was chaos at the scene. Mindful this was a no-service zone, engineers ran down and gave instructions to the drivers as to what they must do.

Thiry removed the plugs and the starter motor turned the engine so that water spurted spectacularly out of the plughole, while Sainz and Eriksson could only glumly wonder if their engines had been wrecked. Prodrive chief, David Richards, tried to push Eriksson’s car, but it became jammed across the track and FIA stewards argued that he was trying to block the track deliberately! 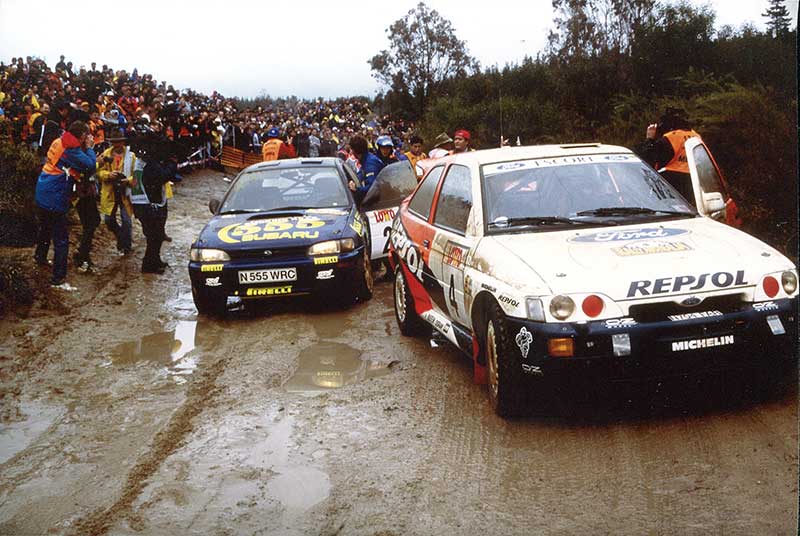 It was total chaos with rally cars stranded and drivers and co-drivers left scratching their heads on what to do next.

Sainz’s co-driver, Luis Moya, stood at the water’s edge and waved other drivers down to dissuade them from trying to cross the water, while team managers stood amidst the crowds in the middle of the track giving their opinions in television interviews!

It was a most amazing scene. Sainz was walking round, hand on his head, looking forever like a man who had just witnessed the end of his championship aspirations - which it could well have been

The stage was duly stopped, and then came the problem of how to extricate the drivers waiting to cross the water, because the obvious alternative route would have taken them along the next special stage. The organisers sent breakdown trucks to pull the stranded cars up to the service area. First decision was how to rearrange the rally. Second was for the mechanics to see whether there had been serious engine damage, thirdly (which could wait until later in the day), was how to handle the stage results, and what to do about competitors that were towed away. Tommi Makinen explained: “I knew that the engine inlet air came from the top of the engine compartment, so I had to make sure that the bonnet did not get covered by the water. We also knew exactly how bad it was because both our gravel note cars broke their engines trying to cross the water.” In the end, all the stricken cars were able to restart, some had their turbochargers change as a precaution.” 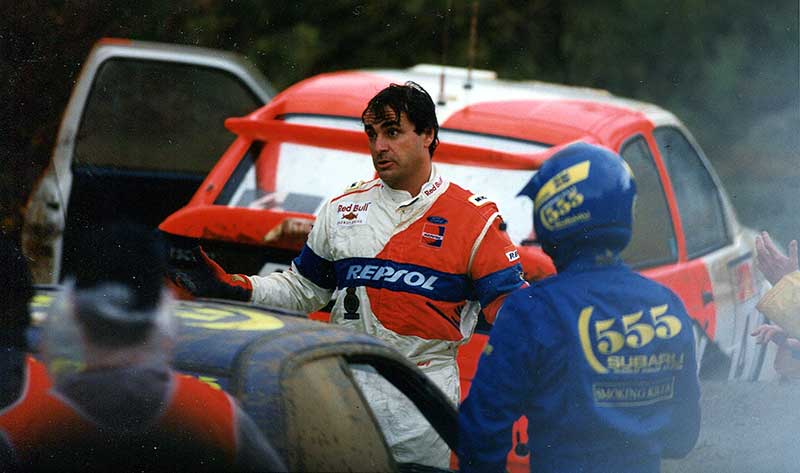 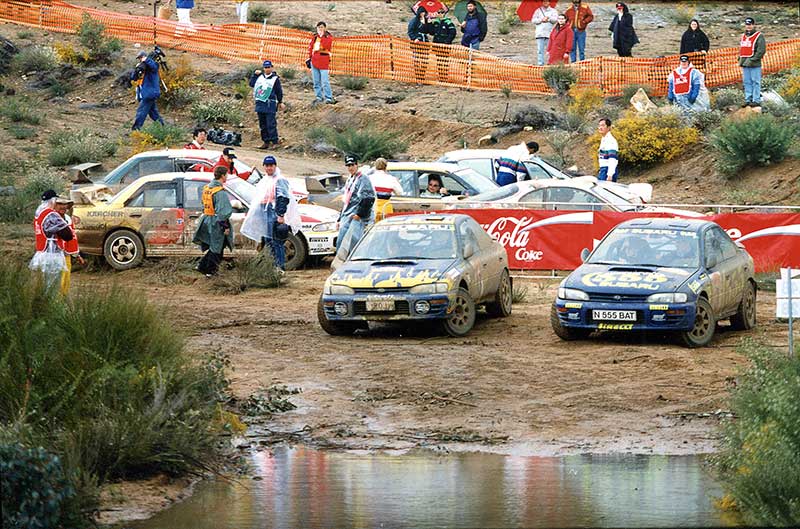 Cars were eventually stopped before they entered the deep ford. 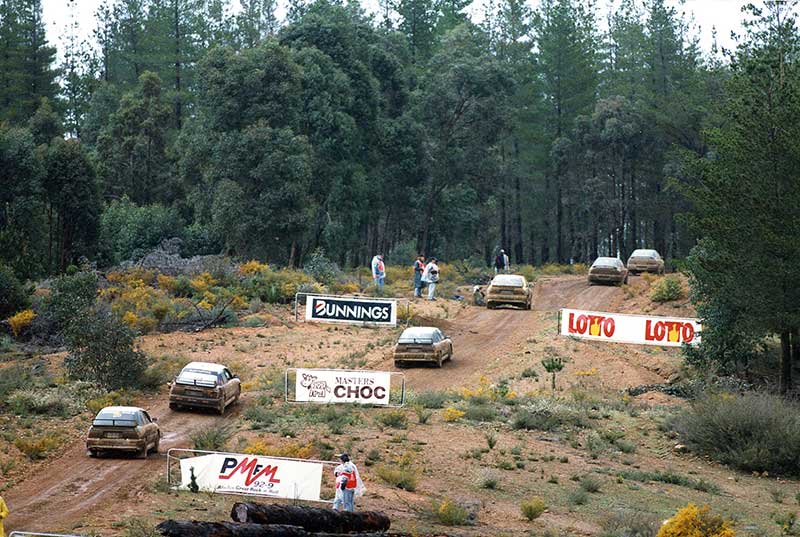 With the stage cancelled, cars headed back up the Bunnings jumps and back to service.