Feature: Buist Golfing (and rallying) for fun and pleasure

When Deane Buist was listed in the 2018 Otago Rally entry list in a Volkswagen Golf GTi, some may have thought it was a printing error. NZ South Islander Buist is a well-known small Ford punter and one of the best drivers of rear wheel drive classic cars on the local NZ scene. His ‘Palmside’ liveried Mk 2 Escort is a familiar and very successful sight in New Zealand rallying, supported by Deane’s business Palmside in Christchurch. 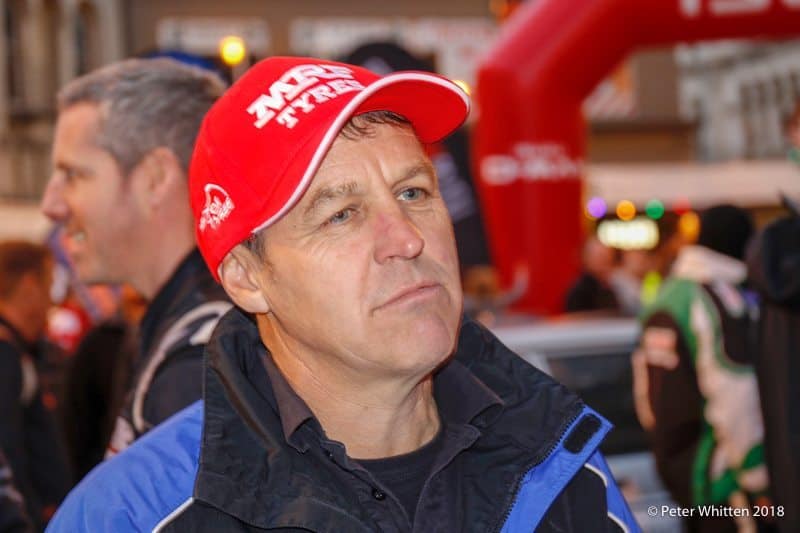 Rallying since 1987, Deane has competed in rallies from the local NZ Rally Championship and the local round of the World Rally Championship from 1995 to 1998. He claimed a win in the 2012 Silver Fern Rally, and numerous national championship class wins along the way. With a long competition history in rear-wheel drive cars, when asked about the newly built Mk 2 Volkswagen, Deane explained that he was looking to build a new classic rally car for 2018, but wanted something just a little different from the BDA Escorts he knows so well. His choice of the Volkswagen Golf was perhaps a surprise, but the German marque is no stranger to rallying success, with a long competition history before the more recent dominance of the Polo WRC cars. 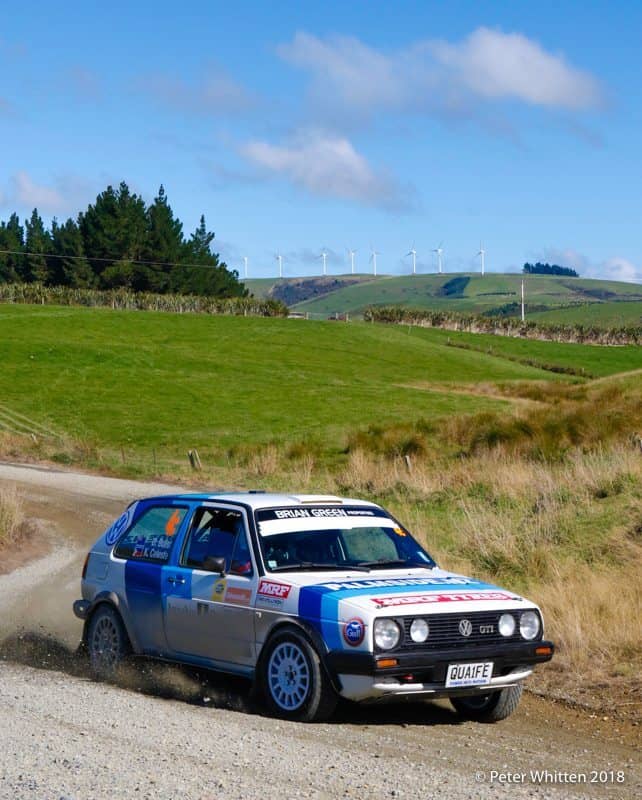 There speed of Buist's VW Golf GTi surprised many at the Otago Rally in April.

Deane’s beautifully prepared Mk 2 Golf GTi in factory colours certainly attracted attention at the opening event in 2018, and his performance alongside co-driver Karl Celeste surprised many. The results from the Otago Rally now show this choice of car to be both carefully calculated and a wise one, as the Golf performed almost flawlessly over the two days of intense Otago competition. The reward was a brilliant 10th overall, and second classic behind the flying Escort RS1800 of Regan Ross. Interestingly, the car only debuted with only an 8-valve engine developing in the region of 170 horsepower, but Deane confirmed that a 16-valve conversion is planned. The upgraded engine should add significant horsepower to a proven package. 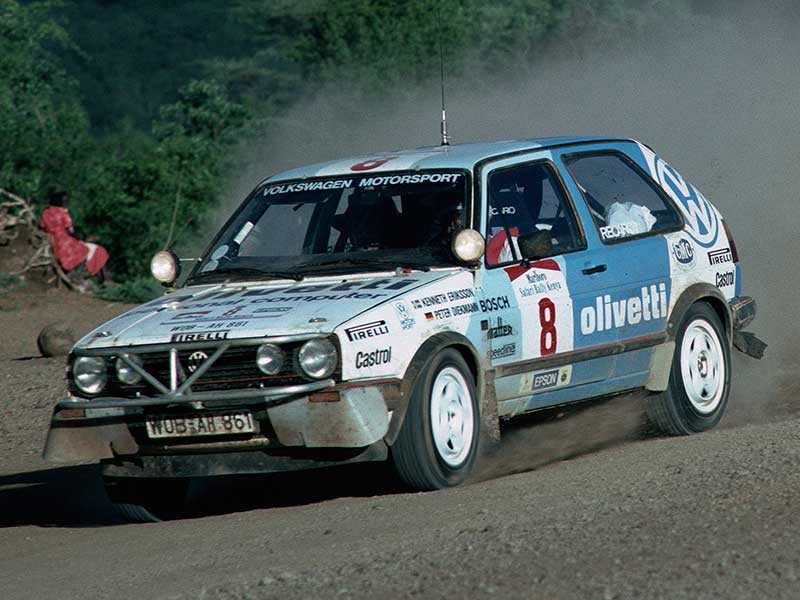 Kenneth Eriksson became a world champion in the VW Golf. Here he is on the 1987 Safari Rally.

The technical specification sheet for the VW Golf Mk 2 shows a weight of only 950kg, and about 195bhp in 16-valve layout. Buist will need more than this to battle and beat the 280bhp Escorts. Whatever the package that Deane ends up with, he has chosen a model with a very good competition record. The Mk 1 Golf GTi emerged in the late 70s and early WRC entries included the Monte Carlo Rally with with stars of the day, Jean Ragnotti, Jean-Luc Therier and Per Eklund. It was 1986 and 1987 that the giant-killing Volkswagen became noticed, especially when Kenneth Eriksson won the inaugural Group A championship at a time when the FIA was trying to find a viable alternative to the Group B supercars. 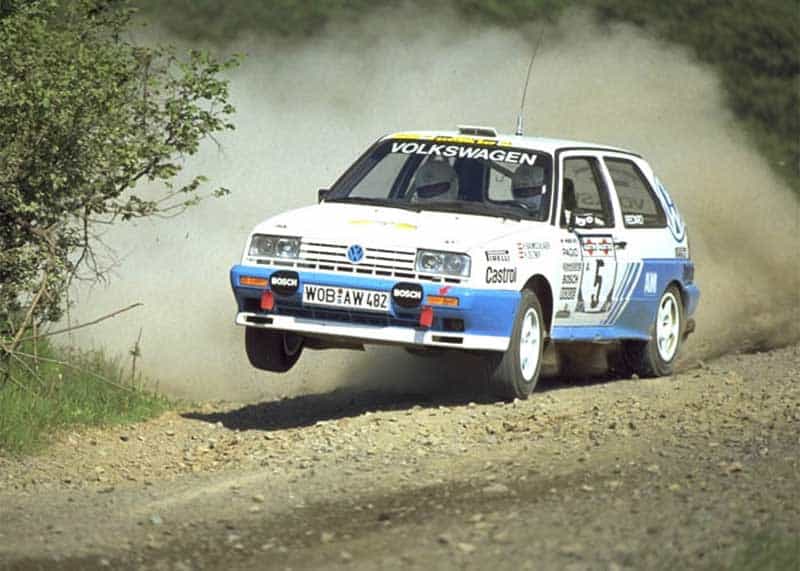 Eriksson’s record for ’87 included his first outright WRC win at the Ivory Coast Rally in Africa, a notoriously tough event which probably served to drive home the inherent strength of the Golf. He was also fourth in the World Drivers’ Championship that year. It’s also worth noting that German ace, Jochi Kleint, is credited with a surprise win in the 1987 Rally Deutschland, driving a works Golf GTi. In 1990, Volkswagen unveiled the interesting Rallye Golf G60 in an effort to stay with the emerging Japanese 4WD Group A supercars. 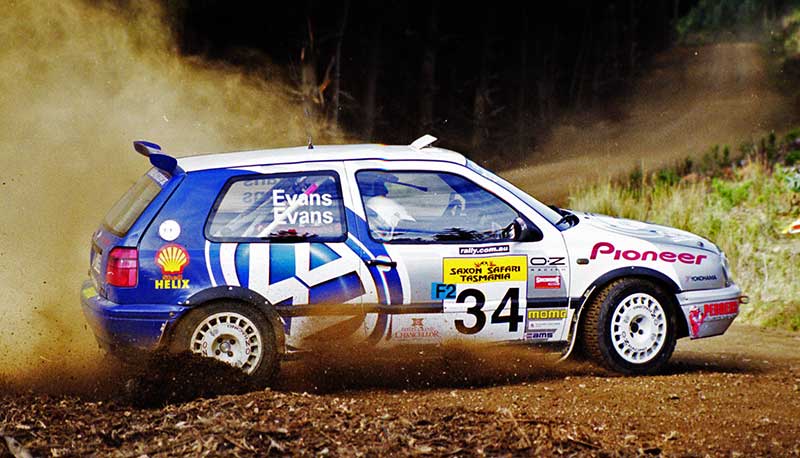 The G60 was unique at the time due to its supercharged 1763cc engine, which is stated to have developed between 250 and 280bhp, running through either a 5- or 6-speed gearbox. Unfortunately, it seems that the Rallye G60 era is not remembered fondly by the parent company, and ironically records would suggest that the G60’s best result was in the New Zealand round in 1990, where it finished third in the hands of Erwin Weber and Matthias Feltz. 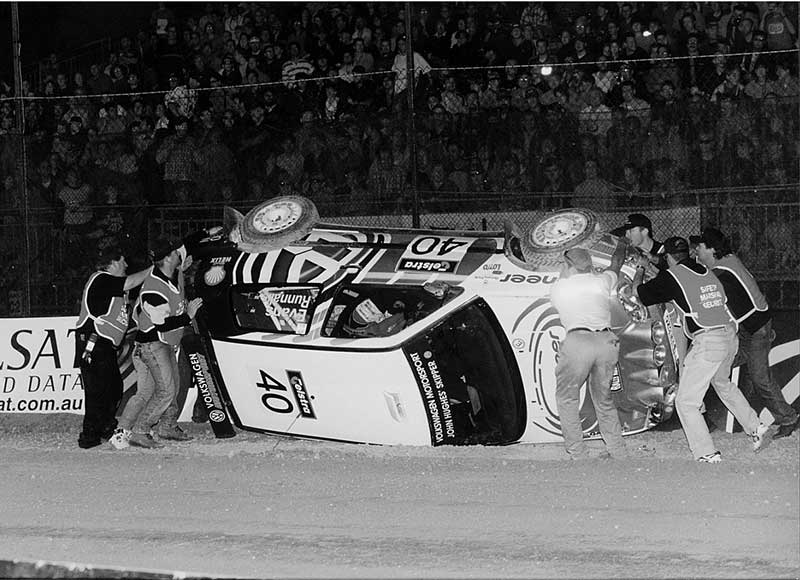 The later 90s saw the evolution of faster and more spectacular Kit Cars and in 1999, a two-car team emerged in Australia under the Volkswagen Motorsport Australia banner. Local hero Simon Evans (with Sue Evans co-driving at the time) showed incredible pace and became a real crowd-pleaser in the front-wheel drive car. The Evans team competed in a number of international events during those seasons, including the Rally of Canberra, Rally NZ and Telstra Rally Australia in 1999, then Canberra, NZ, Rally Australia and the 555 China Rally and Singha Rally of Thailand in 2000. 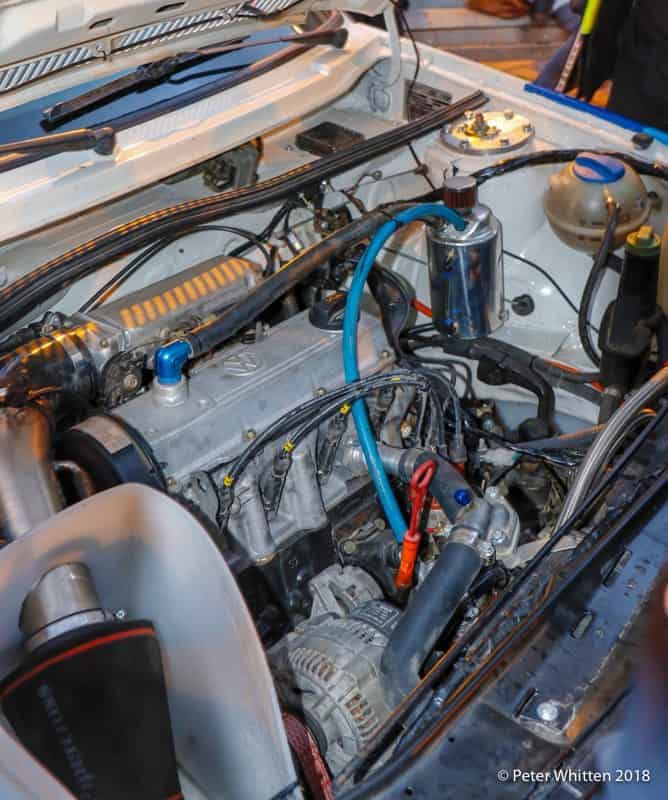 Evans’ Golf Mk 3 Kit car was the 1999 Formula 2 Champion in the Australian Rally Championship. Unfortunately, one of the lingering memories from those years was a high profile rollover at the Langley Park Super Special Stage during Telstra Rally Australia. Volkswagen Motorsport actually competed with Skoda prior to the unveiling of the Polo WRC car, with some heritage of the Polo WRC coming courtesy of the Fabia S2000 car. 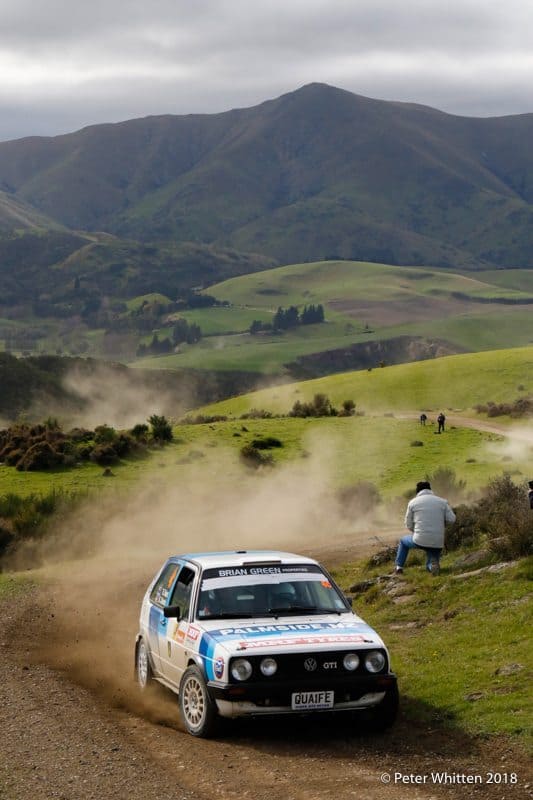 Uphill is where the Golf struggles against the more powerful Escort RS1800s.

History now dictates that the Polo WRC car won four consecutive World Rally Championships before Volkswagen elected to withdraw from the WRC at the end of 2016. For Deane Buist, his new car appears to be doing what was planned. It looks great, sounds great and Buist is able to make the German 2WD pocket-rocket competitive against the incredibly well-supported classic category across the ditch. The Golf GTi is a worthy addition to New Zealand rally roads in 2018. 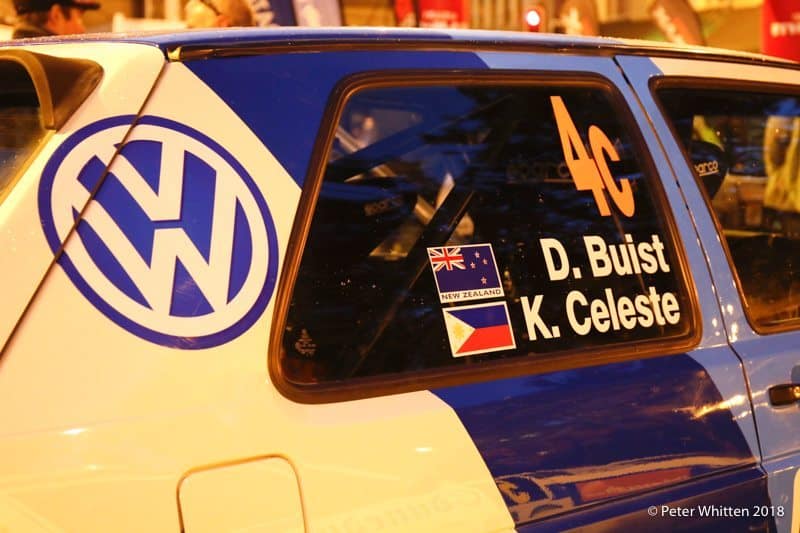 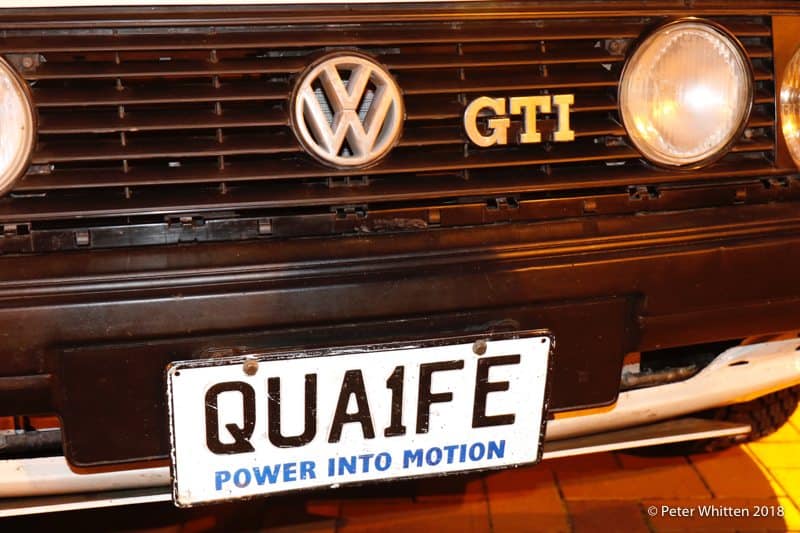 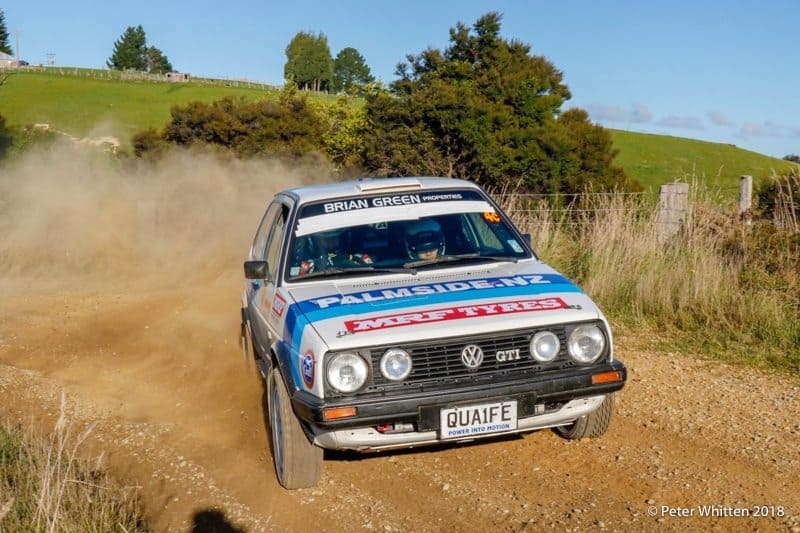 Buist decided on the Golf as he didn't want to build "another Escort", and the VW fitted the bill.

Recap all the action from the Otago Rally: