Things were really happening at OneBetJipocar in the week of Portugal Rally.  On the Monday Mads Ostberg checked out the DMack tyres in private testing, the next day they did a deal to change from Michelin.

It was time to find out more about the strangely secretive Norwegian-Czech alliance which is the only private team to run a 2017 version WRC.

Quirin Muller has been the long-time manager at MPSport, Martin Prokop’s company deep in the Czech Republic where the new WRC team is based.  They are at Jihlava, halfway down the main road from Prague to Brno on the way towards the Slovakian border.

Martin Holmes spoke to Quirin about their unique team.

MH: How does the team operate, now that it is no longer a single car team?

QM: Principally it’s the same as it was in the past.  We do everything from the Czech Republic.  Parts come from M-Sport, and we get engineering support, but we have our own engineers for taking care of Mads’ 2017 car and Martin’s 2016 car.

Principally we run the same structure since when we started in 2012.  The cars have different colour schemes, Mads’ largely black, Martin’s more colourful, but largely white.  Martin likes more colourful and shiny designs! 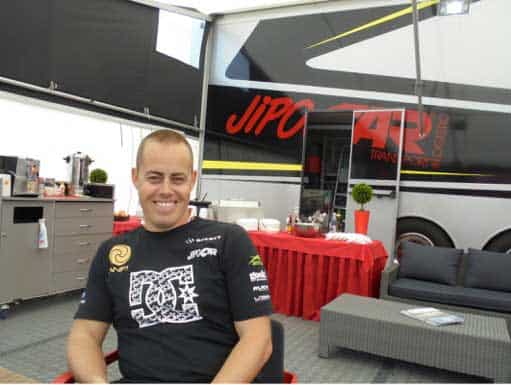 MPSports Manager, Quirin Muller.MH: Working with a 2017 car, are there difficulties you never expected?

QM: To be honest the 2017 cars require much more work, mainly because of the aerodynamic carbon parts to prepare, fit and adjust them.  This is a huge workload when you get them from M-Sport, like the front bumper takes one day minimum work for one guy to assemble and fit them.

You receive single pieces (the front bumper itself comprises 30 parts) which must be attached and then assembled.

As we saw in Argentina, even if there is no major technical issue on the car, you spend a lot of time repairing aerodynamic parts.  The workload is much more with these new cars.

We’ve always had a very close relationship to M-Sport.  I am proud we are the only private team to run ’17 cars, so we are working very closely with Malcolm Wilson’s engineers, who are updating us on the newest developments. 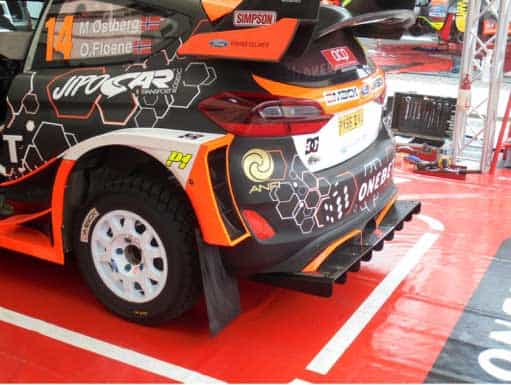 The rear view of the aerodynamics on Ostberg's 2017 Fiesta.MH: Is there anything about your work as a private team which would make it seriously difficult for you to win a WRC event?

QM: For sure money is always a limiting factor because you cannot have enough money in motorsport.  At the moment it is all running quite well, there is nothing really limiting us.  We could not do more testing with our team as we don’t have a test car, we have our one 2017 rally car.  This car must do any testing and the rallies.

It is difficult for the mechanics to maintain the one car because there is no time to change any big metal parts when we go from rally to rally.  The car was only home for three days after Argentina and we had damage on the rear to repair.  It’s tough.

MH: What are the special WRC rules so far as running your car is concerned?

QM: We are a non-scoring manufacturer entry so we have no links on fitting components such as the transmission or engines.   In some ways we have greater freedom than the registered teams.

We were able to drive the car in Argentina before the shakedown but it wasn’t a test, more a sponsors’ prize for a Facebook competition and a PR day for our sponsor, OneBet, with Mads.  It was all officially agreed and confirmed by FIA.

MH: You will not always run a two-car team.  Firstly what is Mads’ programme?

QM: It is still unchanged.  Going to Australia is uncertain, the rest of the European events should happen for us like now.

Event by event I think we have to see where we go with all the costs for the car and the testing, then we can decide if we have money left for Australia or not.

MH: Is there any reality of being able to win a rally?

QM: I think there is a reality to win.  Three years ago Martin was leading after the first stage in Cagliari on the Sardinia Rally, now here in Portugal for Mads as well!  If we do good preparation, have good testing, the engineers do good work and Mads shows good speed like in Argentina, I’m sure there is a chance to fight for the top. 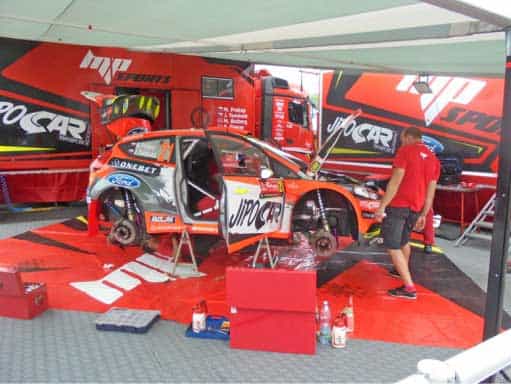 Martin Prokop's WRC Trophy 2016 Ford Fiesta WRC.MH: What is the plan for Martin Prokop in rallying this year?

QM: After this rally in Portugal, we will see how much work has to be done.  If both cars require a lot of servicing or repair we have maybe to drop Italy, but the current plan is to go to Italy.

After that everything is open.  Martin is focussing more on our Dakar project.  He would like to drive 2017 (WRC) car, but as we know that will involve a lot more work than the old car.  Maybe a 2017 car for next year, but for the moment it is not possible.

The WRC Trophy is a good opportunity but we are still a small team and we have two big projects running: WRC with Mads, and Dakar, where we have our own car to build and develop, which we need to prepare for next Dakar.  The clock is running till everything is leaving again to South America.

For the moment these two rallies for Martin in the WRC, after we will see, but his focus is more on the Cross Country.

MH: Martin was vocal for many years that the FIA never respected WRC privateers.

QM: We were asking FIA since 2012 specifically to create some privateers’ championship, but nobody was interested.  They had their big teams instead.

Finally they changed their minds, but you cannot expect that we run for years in WRC just to wait until FIA makes some championship for us.  It would be nice to battle for the Trophy, but it is just too late for us.

QM: There’s a nice Mercedes SLS GT3 standing at home in the workshop looking very sad, all rebuilt but nowhere to go.  The name of our Cross Country car is Shrek, Fiona is always our rally car.

The racing car has no name.  I suppose that is why she is looking so sad!