Memories from 45 years ago came flooding back to legendary co-driver, Lofty Drews, when he was a special guest at the Otago Rally in Dunedin in April. The now 78-year old Drews was reunited with a Datsun 240Z that is, for all intents and purposes, the car that he and Shekhar Mehta drove to 19th place on the 1971 RAC Rally of Great Britain. The car is now owned by Dunedin car dealer, Nelson Cottle, a Datsun tragic whose collection includes a mouth-watering Nissan 240RS. But it is Cottle’s Datsun 240Z which holds a place close to Drews’ heart. 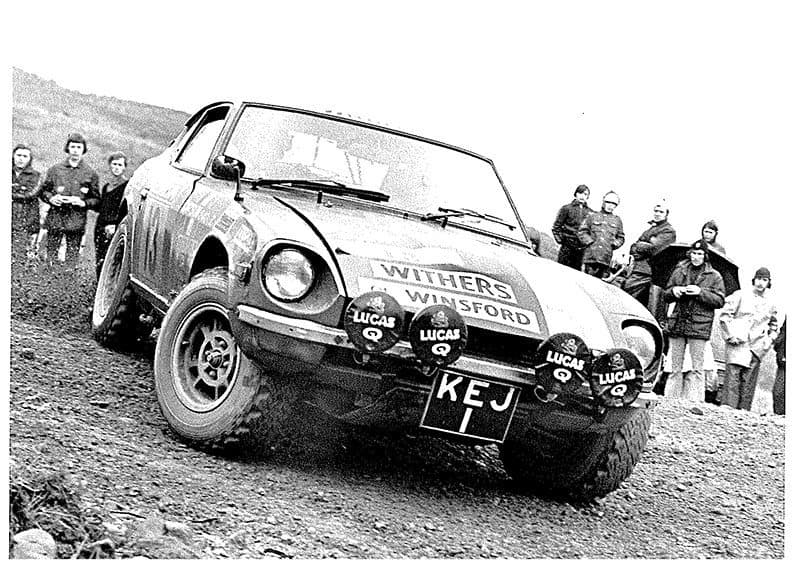 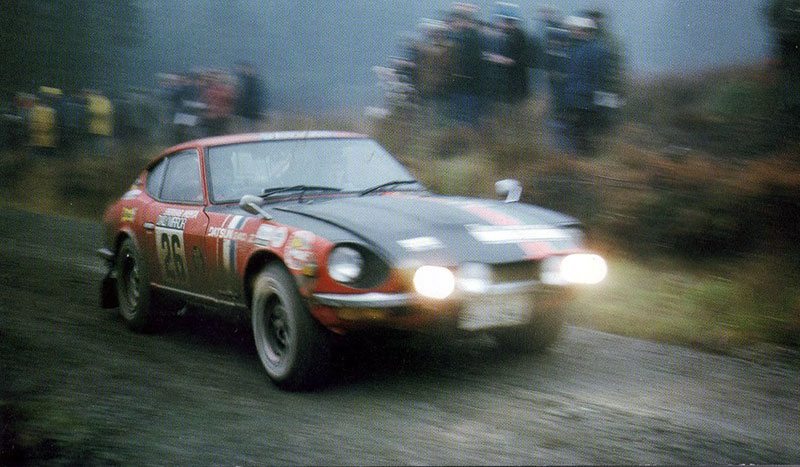 Shekha Mehta and Lofty Drews on the 1971 RAC Rally.

KENYAN LEGEND Born in Tanzania, Drews had a successful rallying career over a 30-year period, the highlight of which was his victory in the 1973 Safari Rally in a Datsun 240Z, alongside local hero Shekhar Mehta. He was a member of the factory Datsun, Opel and Lancia rally teams in the 1970s, and also had the honour of co-driving for legendary drivers Rauno Aaltonen (Finland) and Sandro Munari (Italy). Having retired to Australia in the 1990s, he contested many rounds of the Australian Rally Championship. He is now living in Queensland. His first visit to the Otago Rally in New Zealand’s South Island proved the perfect opportunity to reunite him with a Datsun 240Z that, even to this day, rekindled fond memories. 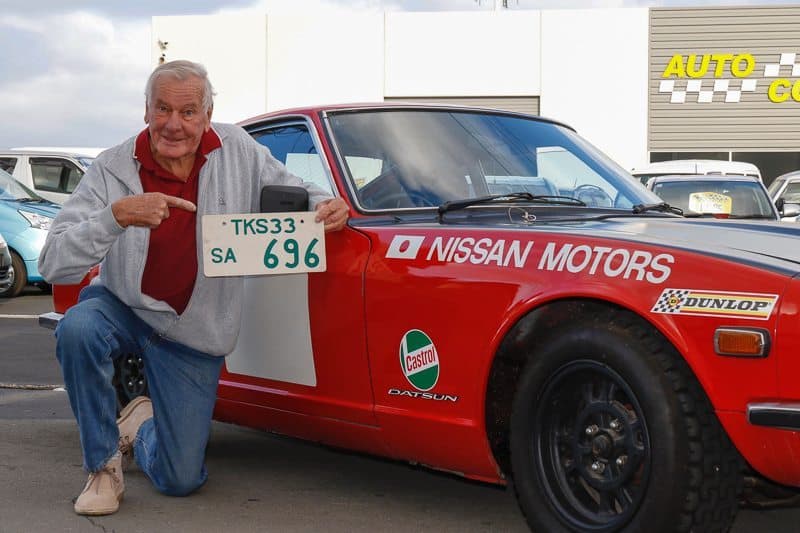 Lofty Drews with a replica of the car's Japanese carnet plate.

In the early 1970s, the Datsun 240Z was the Japanese manufacturer’s weapon of choice and, as Mehta and Drews’ victory in the 1973 Safari proves, rightly so. The car that now sits in Nelson Cottle’s workshop never won a round of the World Rally Championship, but it did win the rugged Welsh Rally in 1971 with British great, Tony Fall, at the wheel. Later that year, Mehta and Drews finished 19th in the RAC, despite Mehta breaking his hand mid-event when the steering wheel spun back unexpectedly. 1971 was a challenging year at the RAC Rally, with some of the worst winter conditions ever experienced on the rally. The Mehta/Drews combination were one of many to spend consideration time off the road or stuck in snow banks. 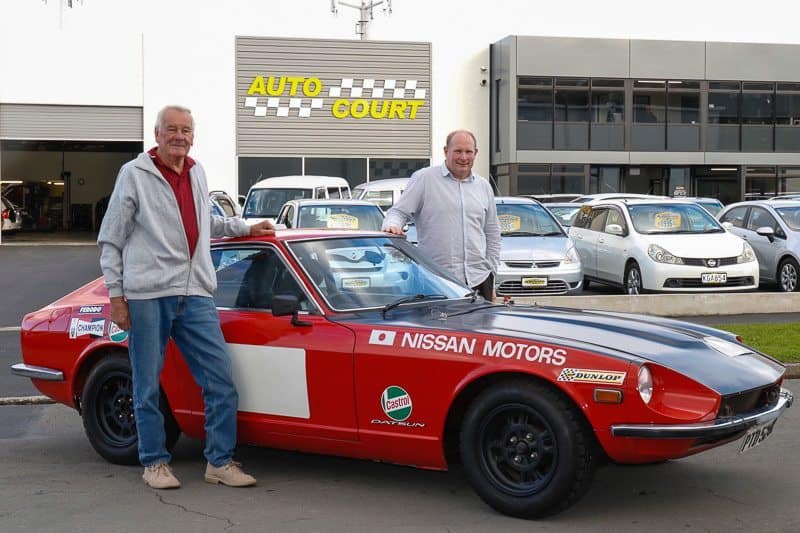 DATSUN 240Z HISTORY Back in Dunedin in 2018, seeing Drews getting reacquainted with his former chariot was akin to watching a father and son reunite after years apart. The glint in the tall Kenyan’s eyes was something to behold. Cottle is quick to point out that the car sitting on the dealer forecourt has been re-shelled in the 1970s, a fact confirmed by its former owner, Jonathan Bradburn. “I acquired the car in about 1979 from Stewart Coupe, who had bought it from Withers of Winsford, who were effectively breakers of rally cars at that time,” Bradburn says. 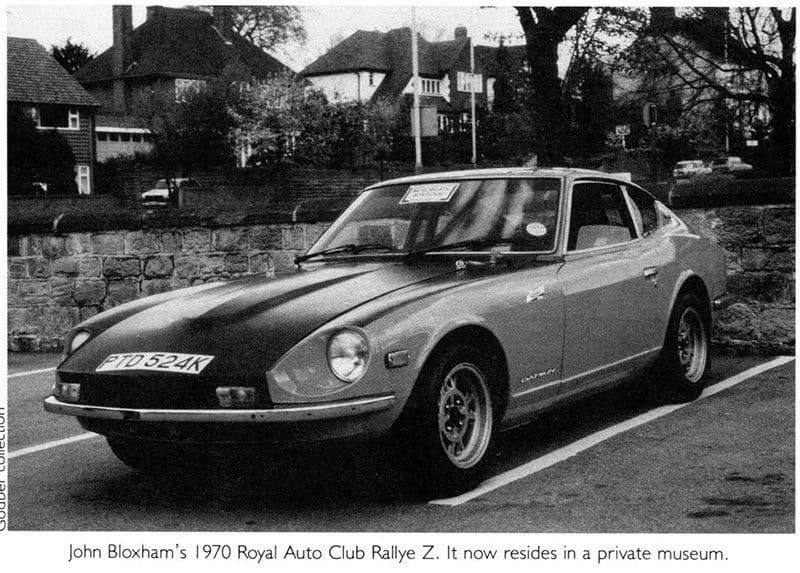 “The car was now very tired, and after I acquired it, I set about restoring it in the early 1980s. The shell was in a very poor state, hence the replacement. “In my view the car is a correct restoration of the original,” he said. According to Cottle, the car ran a number of different registration plates during its rallying career. “When it first arrived and was campaigned by Datsun in the 1970 and 1971 seasons, it ran the Japanese carnet plate TKS33 SA696,” Cottle explains. 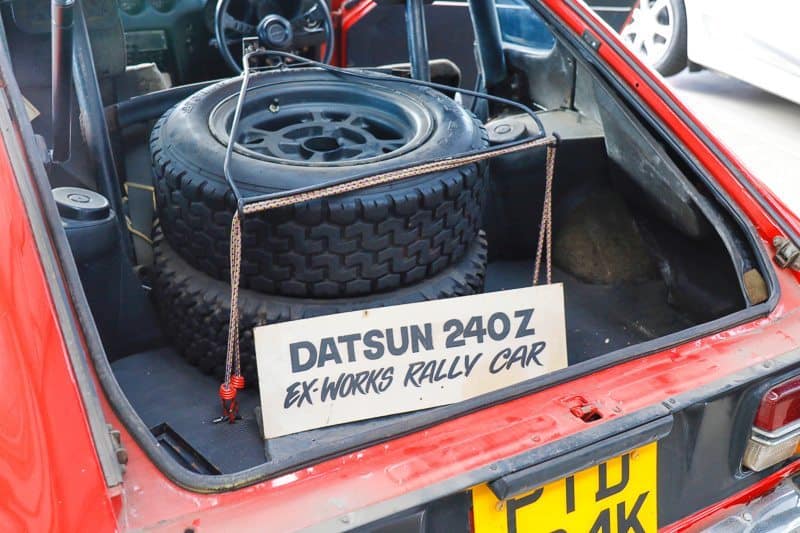 “During Cal Withers’ ownership it ran his personalised plates, CAL1 and KEG1, then after he sold it, it ran the standard UK plate PTD524K, which it currently sports now. “The Japanese carnet plate that came with the car is a replica. “The car was reshelled after Roy Fidler rolled it on the 1972 Scottish Rally, but other than that, it still retains many of the works parts. “When I purchased the car I received the original UK registration papers, log book and FIA papers,” he adds. 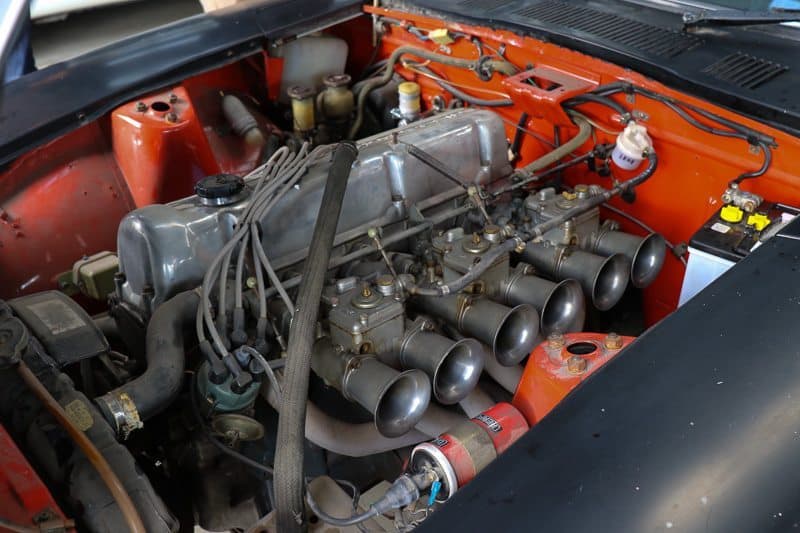 STEPPING BACK IN TIME Taking a close look at the Datsun 240Z, you get a sense of just how tough those events in the early 1970s really were. Safari and RAC rallies of the day were long and arduous affairs that often ran all day and through the night, with minimal rest halts. Just finishing such events, let alone winning them, was a feat in itself. The Datsun 240Z in question has all the landmarks of a classic, early 1970s forest racer. 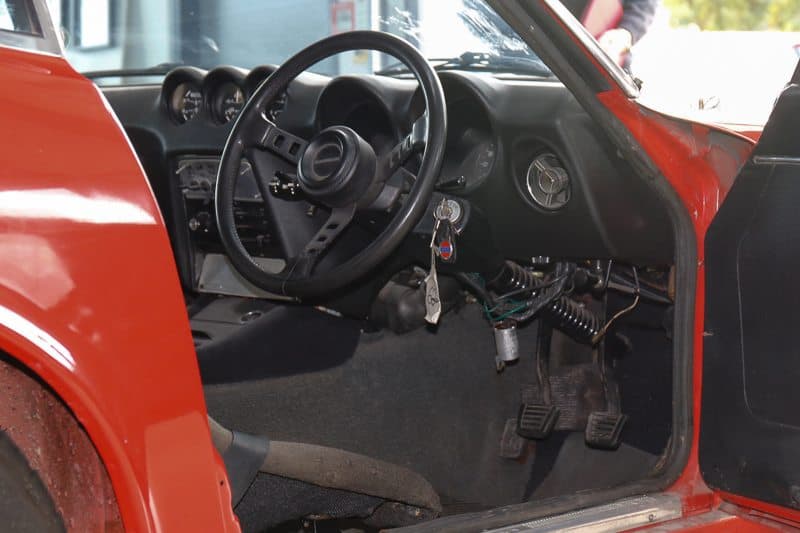 On the inside, the roll cage is just a hoop with a couple of legs bolted to the floor. There are two spare wheels which, while adding considerable weight, were essential cargo for the marathon events of the day. The interior itself is sparsely fitted out, as the rally cars of the time were, however, the Zed does sport the ‘works’ rally seats and harnesses, and a small footrest for the navigator. Externally, the old and hardened Dunlop A2 rally tyres are straight out of the 1970s, as are the reversing light and tow hook bolted to the chrome rear bumper. 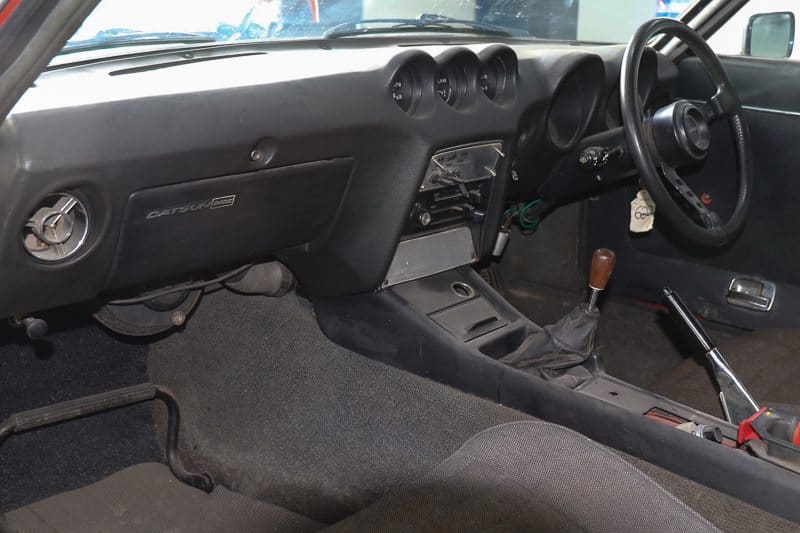 "The car is missing some of it period parts, like the works mud flaps, carburettors and airboxes, jacking points and twin exhaust system," Cottle explains. "Johnathan Bradburn on-sold this car, plus two other 240Zs, including an ex-Win Percy 240Z race car (rego LAL909K) to the Arthur Carter Collection. For reasons unknown, Arthur Carter converted the race car to rally spec and some parts from PTD524K were removed and fitted to LAL909K. "I have been fortunate enough to find the correct Solex carbies and airboxes, driving light switches, mud flaps etc, over the years, and will have to fabricate the likes of the exhaust and jack points which will be fitted back to the car during the restoration." 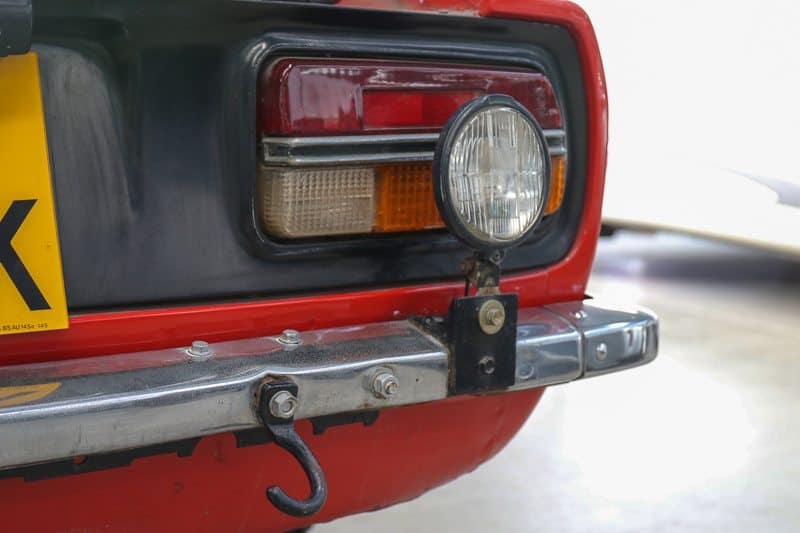 WONDERFUL MEMORIES History aside, seeing Lofty Drews get reacquainted with the car was a joy to behold. Sitting in the left-hand seat of the car, stories of his adventures in the low-slung Datsun came flooding back and he was quickly entertaining his audience of his and Shekhar Mehta’s exploits. All of which was music to the ears of Nelson Cottle who, for 12 years, has had the car sitting in a shed, and seemingly needing “the spark” to complete his restoration project. 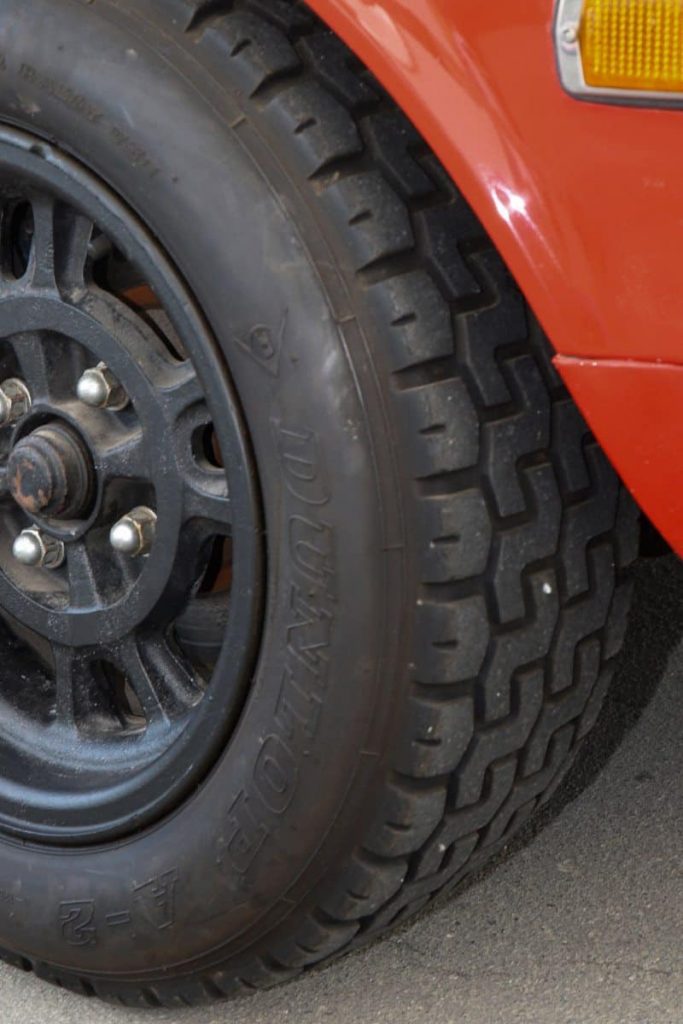 A successful business and a busy family life has seen the car sitting dormant since 2006, but amazingly, with a fresh battery and a splash of fuel, the 240Z quickly roared back to life. As for its future, Cottle plans to complete the restoration by adorning the car in the colours that Mehta and Drews ran during that 1971 RAC Rally. It would be hard to think of a more fitting tribute. And as for Lofty Drews, with a mind still as sharp as a tack, and a lifetime of stories to tell, one can only hope that he has a book in the making, and that one day we can all read the exploits of a remarkable career. 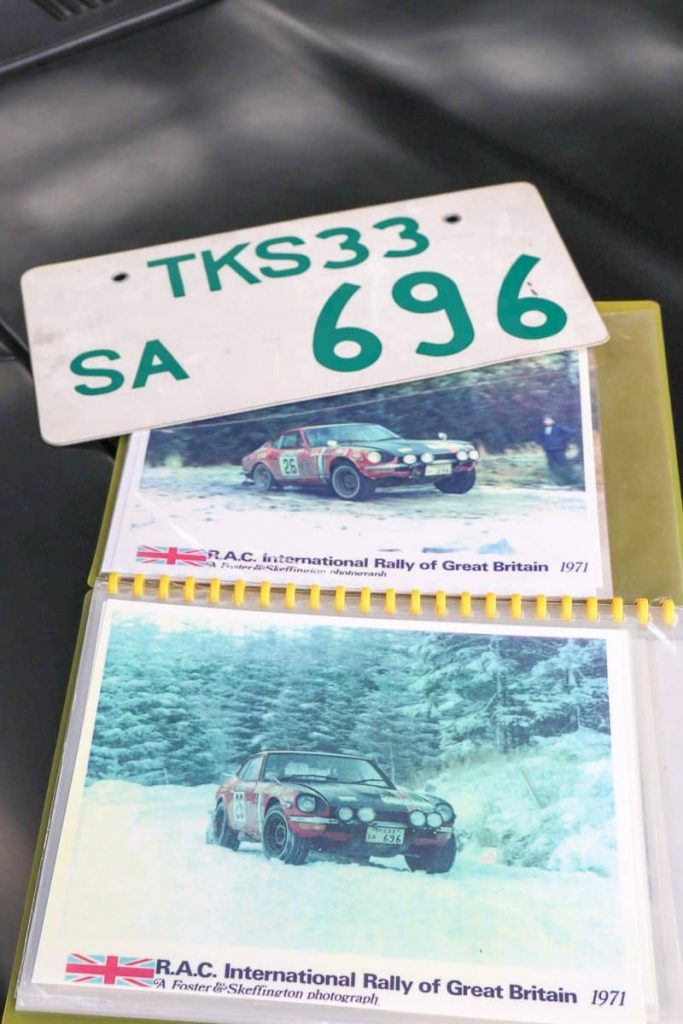 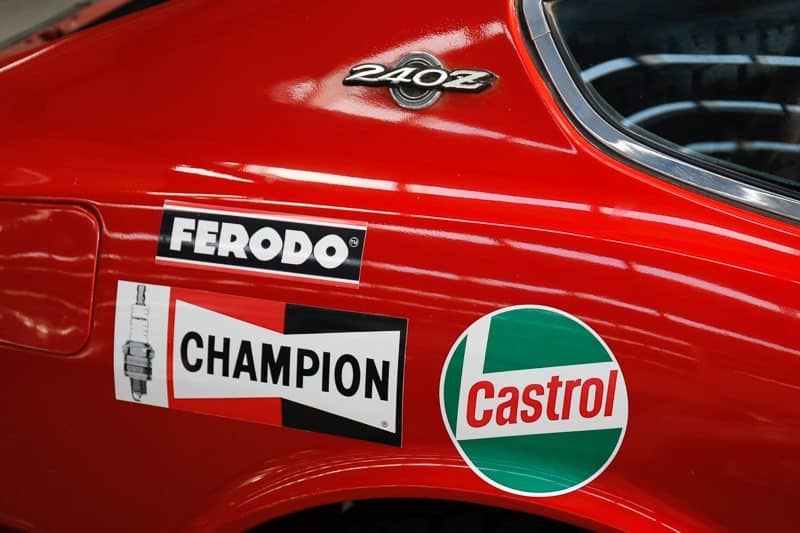 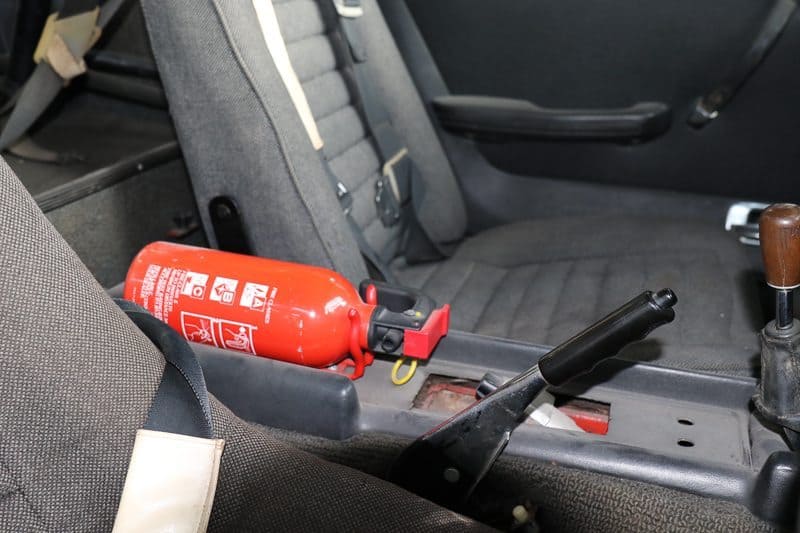 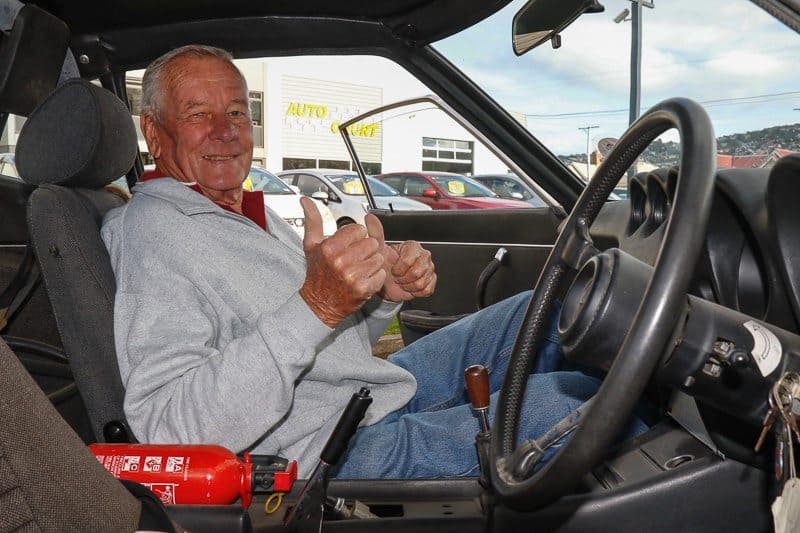 Lofty Drews was thrilled to be reunited with the works Datsun 240Z in New Zealand. Photos: Peter Whitten 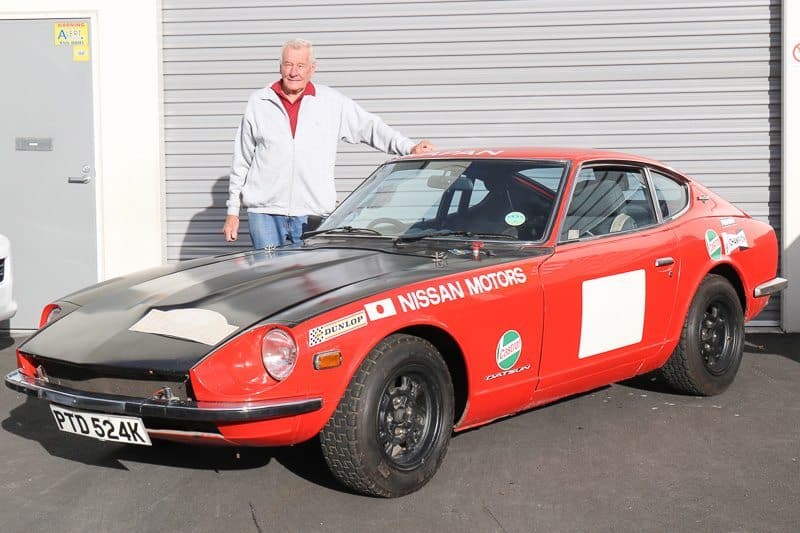