Feature: Mineshaft memories may be all that’s left

Canberra’s most famous piece of rally road, the Mineshaft, hasn’t been used in an event run by the Brindabella Motor Sport Club for many years, and isn’t likely to be in the near future. We take a look back on perhaps Australian rallying's most famous piece of road, with memories from Cody Crocker and Glenn Macneall, and some historic photos and videos from 'The Mineshaft'. * * * * * * The short piece of road in the Brindabella Ranges is now badly rutted as a result of rogue four-wheel drivers trying to claw their way up the incline in the wet, but according to current National Capital Rally clerk of course, Adrian Dudok, that’s not the reason it is no longer used. “I refuse to use it, as I fear someone will get badly injured there one day, and that’s not going to happen on my watch,” Dudok told RallySport Magazine. “I never felt comfortable going down it as a competitor, and that didn’t change when I started directing events. “Unfortunately there are competitors out there who see it as a challenge to see how far you can jump down it, but that could easily end in disaster,” he says. 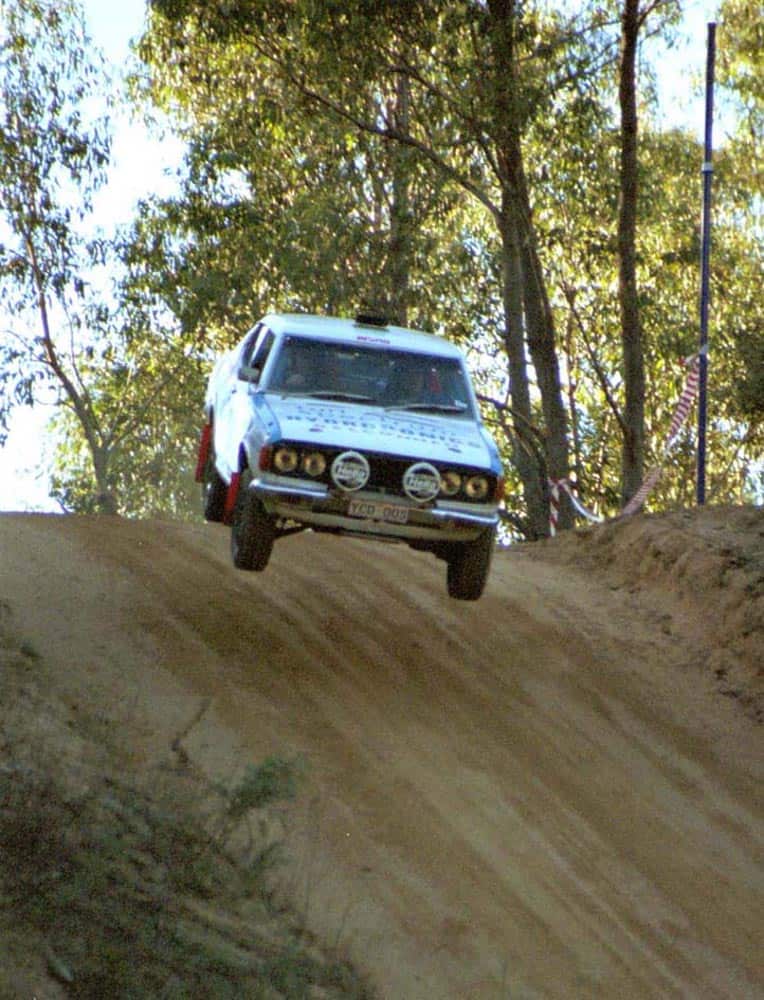 This Datsun 180B driver's attack on the Mineshaft ended badly .... 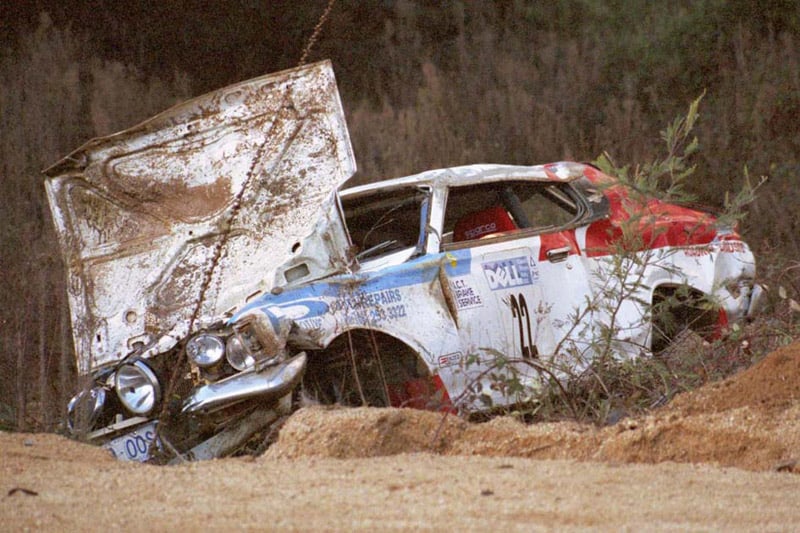 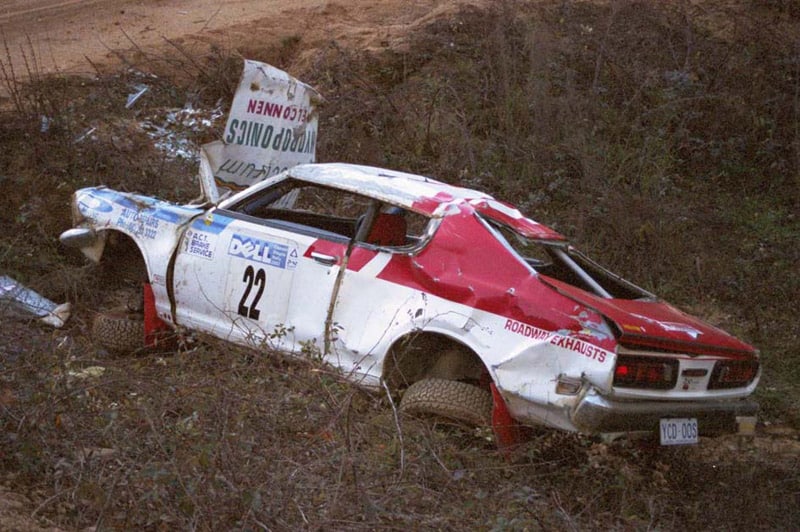 Over the years the Mineshaft has changed a lot in its characteristics. In the 1970s it was a lot narrower when it was used by events like the Don Capasco and Castrol International rallies, and often had ruts all the way down it from running water. That meant it was nowhere near as fast as it became in later years. More recently the road was widened, the bump at the bottom was taken out and it became a lot faster to drive down. “It was always a great spectator point, but as I said, I’m worried that someone will get seriously injured, or worse, if we use it now,” Dudok added. 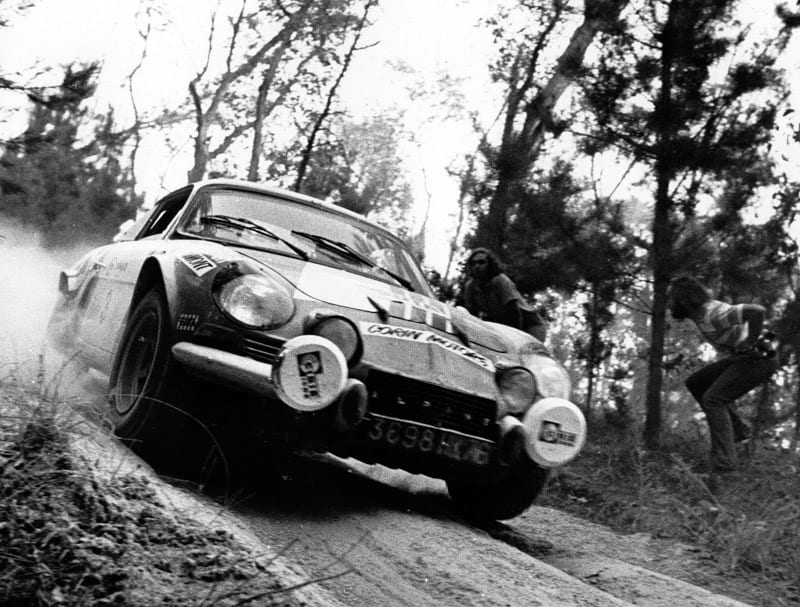 Bob Watson heads down the Mineshaft in his Renault Alpine A110 in the Don Capasco Rally.

With the introduction of digital cameras and smart phones, frame-by-frame footage of a Mineshaft disaster would be on social media in minutes, potentially doing irreversible damage to the sport. While many of us remember the exciting action and the huge spectator numbers who flocked to the famous location every year, it seems that those memories may now be all we have. As much as we’d like to see the Mineshaft return, you can’t knock Adrian Dudok’s logic. https://www.youtube.com/watch?v=5BlH4SNC0TY

It's amazing how the mineshaft has changed over the years. My first experience of the mineshaft was in 1994 when we competed in the the Australian Rallysport News Junior Challenge in Canberra as the final of the challenge. We spent a bit of time doing recce prior to the rally and used our Mazda 323 as the recce car. It was a rally car in itself and was probably the only time in history that a recce car was significantly faster than our rally car - the old Mazda RX5. We were fairly new to this pacenote stuff so we took an experienced rally expert by the name of Malcolm Hoborough with us to show us the ropes. 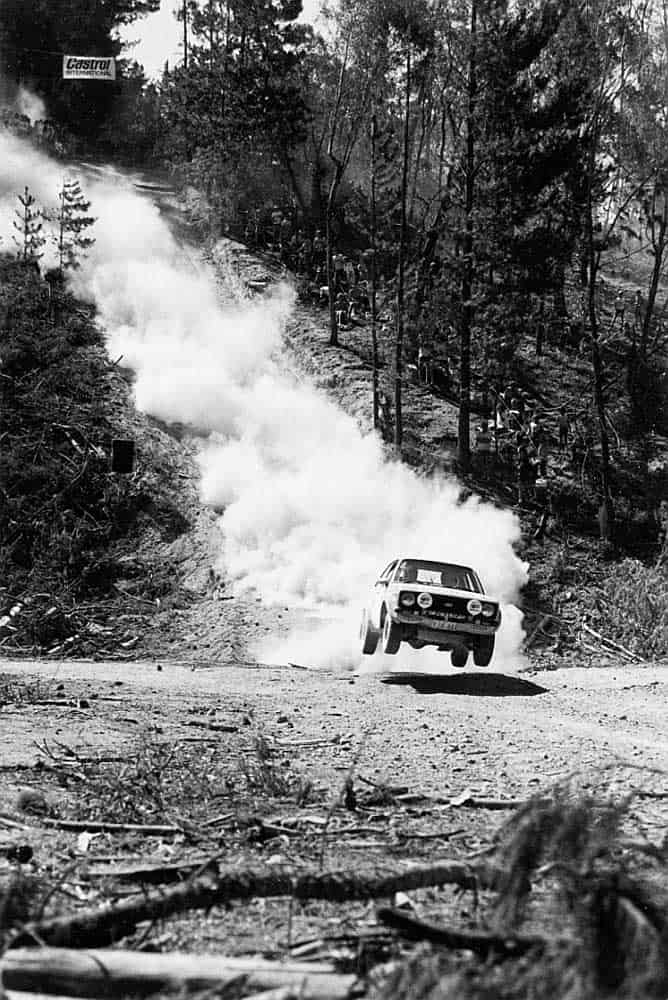 Greg Carr charges down the Mineshaft in his Escort RS1800 in the 1980 Castrol International Rally.

Mal doesn't think that the mineshaft is much of a challenge because he fell asleep in the back seat while we were doing recce - including a run over the mineshaft! I'm sure he's the only person in history to do that. Over the next 15 years I got to see many changes in the mineshaft. Early on there were plenty of trees at the top to guide you because it's not a straight approach, there's a slight left turn at the top. After the bushfires and logging in the early 2000's it became a lot harder to sight the exact line needed on approach. This caused plenty of drama for my team mates while competing with MotorImage in the APRC rounds from 2006. First was Eli Evans who nearly landed at the bottom on his first attempt. Then came Rifat Sungkar, my Indonesian team mate in 07-08. He wanted to know what speed to go over it at. I told him I've never been able to look at the speedo in a rally so I don't know. 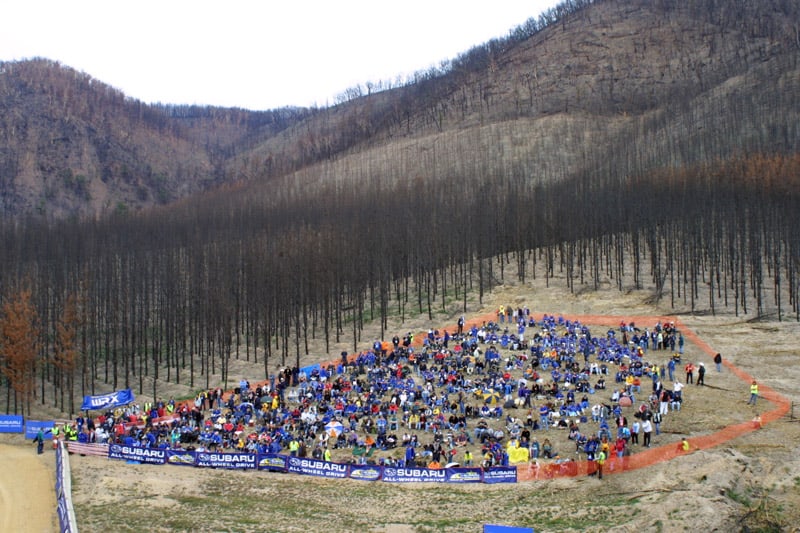 Members of the Subaru WRX Club at the base of the Mineshaft in 2004.

I remember once in recce I was doing around 80kmh and just lifted a wheel off the ground so I told him that 90k's is about the max speed. Rifat thought this was a good idea and decided to add a few k's to that. His jump was one of the biggest ever and he also landed near the bottom - and the car survived. When he finally came clean he declared that he might have added around 30kmh to my speed and hence jumped a bit further than planned. It's definitely one of the most thrilling pieces of road anywhere in the world and will always be one of the most challenging jumps to attack. I rate it as 10 out of 10 for excitement for both driver and spectator. 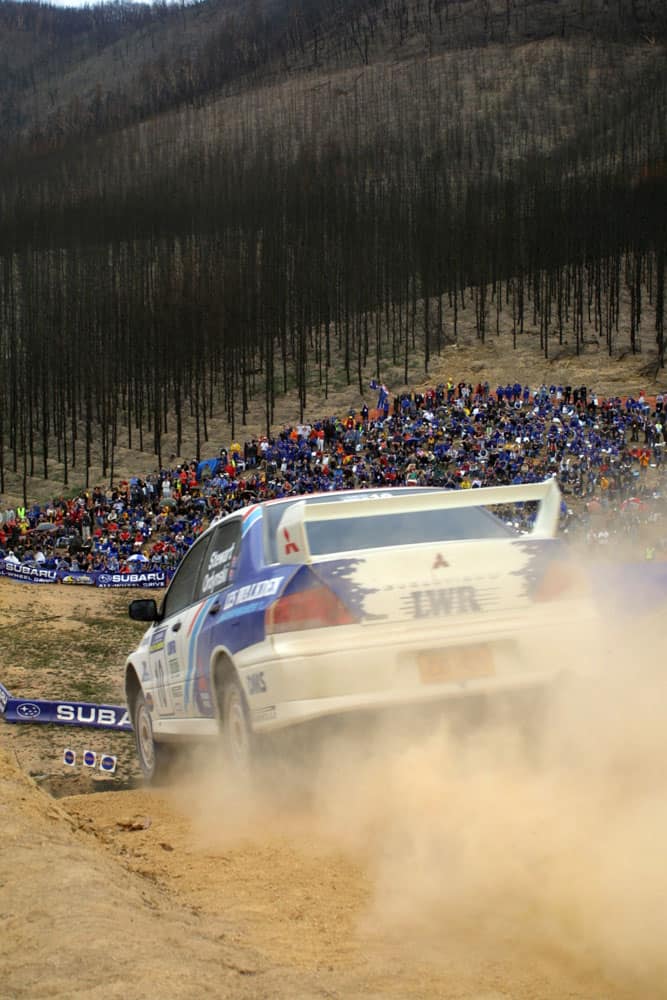 Finland's Juha Kangas heads downward in his Lancer Evo in 2004.

The mineshaft is a pretty intimidating piece of road and clearly very iconic throughout Australia. I have also had several rally friends from around the world comment on that 'crazy steep piece of road'. I was lucky enough to work in Canberra helping to put together the Rally of Canberra for several years, so I have driven over the Mineshaft several times, mind you it was never very fast. I am pretty sure that the only times I have gone over the Mineshaft in competition was with Dean Herridge in the Rally of Canberra around 2003 and 2004. Dean is a very calculated and intelligent driver and there was never any rush of blood heading over the Mineshaft. I am not sure what speed we hit it at, but certainly I think we only flew for a short distance. Approaching the Mineshaft is a pretty intimidating feeling and is a bit of a sense of relief once you round the left hand corner at the bottom. 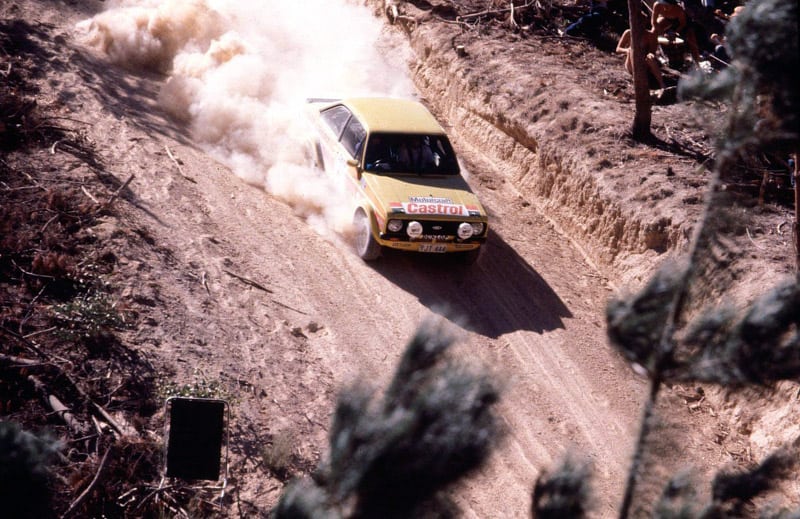 I remember helping with a Subaru vehicle launch in Canberra and venturing out to the Mineshaft with a group of engineers from Japan. We were four-up in a standard Forester, we were showing them the drive course for the following days launch that included driving up the Mineshaft. To say that they were a little stunned when we came around the corner at the bottom to be greeted by a near vertical climb would have been an understatement. None of them thought it was possible to drive up the MIneshaft. With white knuckles clenching the door handles we headed up and they were pleasantly surprised and relieved that the Forester made light work of the climb. Several photos and big smiles later and we were on our way. The Mineshaft certainly leaves an impression on people.

No self respecting rally fan would ever admit to visiting Canberra for a rally without visiting the iconic Mineshaft. Of all the special spectator points used in Canberra rallies, the Mineshaft is far and away the most visited and the most iconic spot for exciting rally action. A visit to the Mineshaft will not only strike a chord with rally fans during an event, but also a feeling of dread amongst rally crews. It’s that kind of road. The Mineshaft, a particularly awesome piece of forest track reached from Paddy’s River road in Pierces Creek forest, south west of Canberra, was used in  the “good old days” of Castrol International rallies back in the 1970s and possibly even earlier. It’s a favourite stretch of road for event directors, too, who almost invariably use it to challenge rally crews and to add a little spice to spectator viewing. But there are those of you who have heard of the spot, but have never been there and are asking what the attraction is. 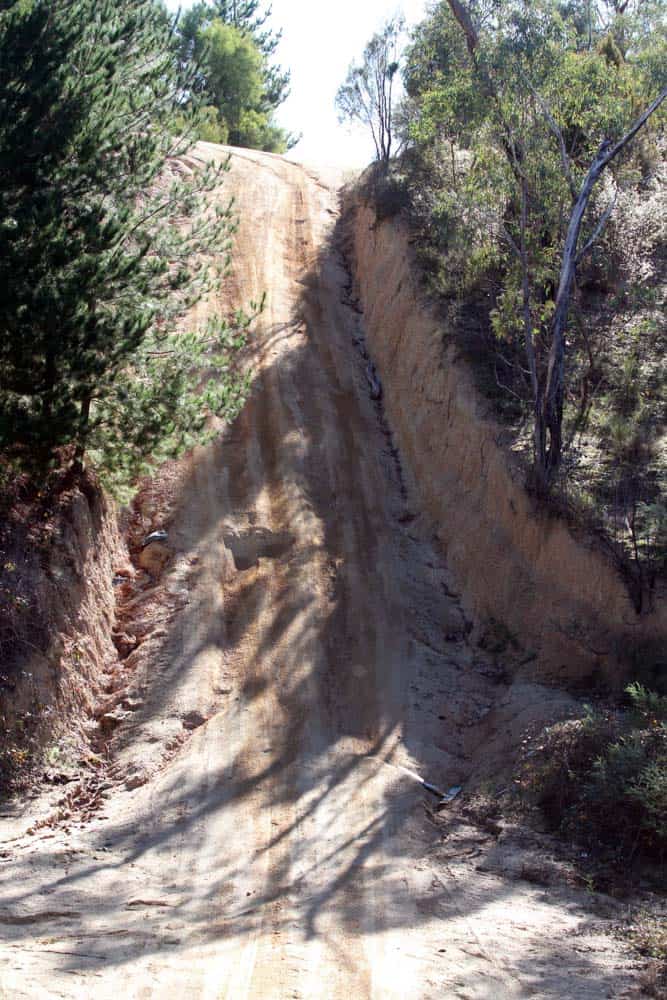 Today the Mineshaft is only a shadow of its former self.

The Mineshaft features surely the steepest descent of any trafficable roads in the Canberra area or even further afield, the slope (or descent) something like 1 in 3 – in other words, too steep to drive up and only able to be walked up with a great deal of difficulty. Not that rally route instructions ever require competitors to drive up this unique geographic feature, for that would be tempting disaster. And where other forest roads in the area are relatively feature-less, the Mineshaft is the Bathurst “Dipper” of scary terrain. Route instructions usually include dire warnings about the severity of the descent and anyone foolish enough to ignore the advice given usually pays the price for their bit of bravado. All within 100 metres or so, competitors plunge off the forest track, the road beneath them falling away beneath them like a Big Dipper at an amusement park. One hundred metres or so later the valley floor levels out and the road continues into a rising left hand corner. If you’re brave, it’s all over in a matter of seconds, if you’re fatalistic it could see you momentarily flying into the void, before executing a serious crash landing, as has been done on multiple occasions. No words, I’m told, could truly describe what it feels like to go over the top of the Mineshaft at anything more than a fast canter. Many have tried and paid the price, caught out by a heavy landing or from not tackling it in a circumspect manner, much to the delight of the presence of (usually) hundreds of fans waiting in anticipation below. New Zealand has its Motu, Bathurst has its Dipper, but there’s only one Mineshaft, and as a competitor you’re not likely to find this type of an adrenalin rush anywhere else in the world. 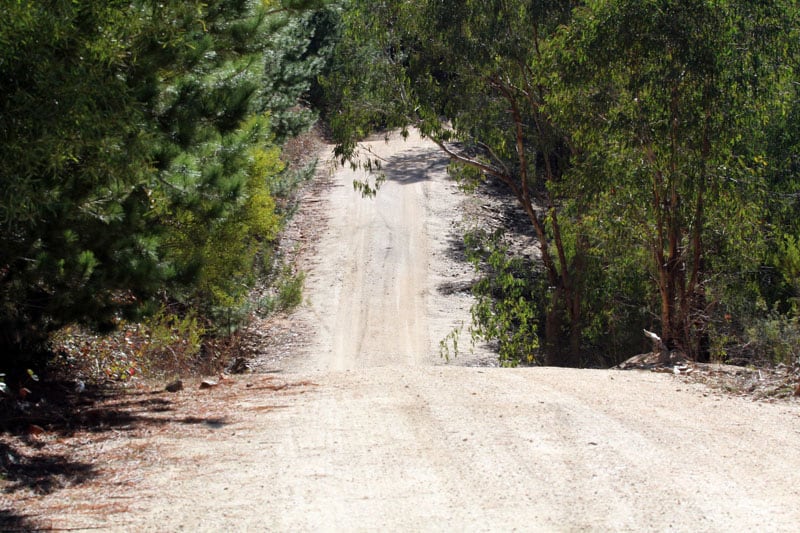 The approach to the Mineshaft is fast and straight .....