Young Finnish driver Juha Kangas will trade the ice and snow of his homeland for the dusty reaches of our island continent when he joins the 2003 Australian Rally Championship with Les Walkden Rallying.

(You can read our interview with Kangas' former co-driver, Julia Rabbett (Barkley), who is now with Team Citroen Australia, HERE.)

Kangas (29) who has driven for factory teams as well as privately run operations, has had stints with Mitsubishi Ralliart, Prodrive (Subaru) and as a driver with the Suzuki Junior World Rally Team in the past few years.

Like most Finns in rallying, Kangas grew up on a farm and began fine tuning his skills on the family tractor from the age of five. But it wasn't until much later that Kangas tried his hand at rallying, at first in a 1600cc rear wheel drive Escort. 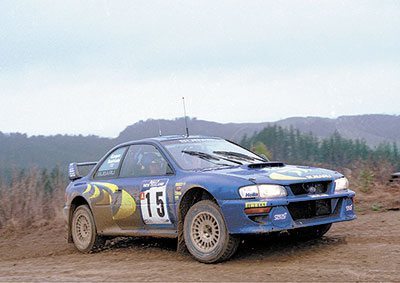 Juha Kangas driving for the Subaru World Rally Team at Rally New Zealand in 1998.The young Finn is looking forward to extending his skills in what has become the most competitive regional Group N Championship in the World. Group N at world level has taken on a life of its own and competition in the Australian production car category is equally exciting at the top.

Kangas is already looking forward to the concept of competing in Australia and will arrive here next week to begin his preparations for the season.

"Australia has a reputation as a competitive series and I think it will be good to be competing against guys that are considered some of the finest Group N drivers around," Kangas explained from his hometown in Finland.

"Australian drivers have always been hard to beat at Rally Australia (Australia's world round) which shows the skill level here. I have known Les now for a few years through our Rally-Rent Europe contacts and think this is a great opportunity to compete against some very fast rivals.

Team Manager Les Walkden expects that Kangas, who has a depth of experience in European competition, will adapt well to the Australian championship.

"We're pretty pleased to have Juha driving with us this year. He's been a round the block and will fit into Australian competition very well. The car itself will turn up just a couple of days before our first round in Western Australia so it will be a big job to have it all ready for the Forest Rally,"Walkden explained.

"The car is a left hand drive Evo 7 (Mitsubishi Lancer Evolution 7) and Juha tells a great story about towing the car through Europe to get it on a boat to Australia in time.

"Our plan for the Forest Rally is just to go reasonably quietly for the first round and then improve the car before we go to the next round."

For Kangas, it will be a steep learning curve as he comes to terms with the dramatic changes in Australia's road surfaces. He will luckily have Australian co-driver Julia Rabbett with him for the season, who will provide a valuable local link.

Compared to Europe, travelling interstate is like travelling to a different country, where each event has very different topography and road surfaces. 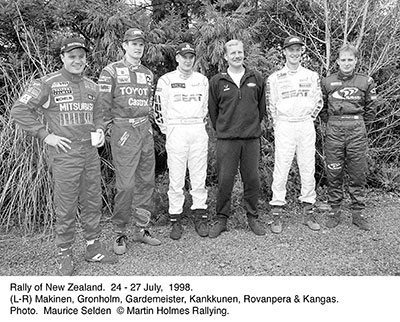 Juha Kangas (right) and the other Flying Finns at Rally New Zealand in 1998.While Australian conditions might be a lot to get his head around, Kangas has had experience in several different types of rally cars, both front and rear wheel drive, in countries throughout the world and in a variety of conditions.

Coming from Finland, he has a lot of experience driving on ice and while Australia is not known for icy surfaces some ARC events can sometimes deliver slippery and challenging driving conditions.

The Australian Rally Championship will welcome Kangas into its fold and Team Manager Les Walkden says that having Kangas in the championship may well open for more interest in Australian rallying.