Swedish constructor of the rally-developed Mitsubishi Mirage, MPart AB, is the first team to announce their plans for two cars to contest a full season in the FIA Asia-Pacific Rally Championship, one to be driven by Finnish ace Jari Ketomaa.

Ketomaa in action in the Mitsubishi Mirage in last year's APRC.Following the car's highly successful debut in the APRC, when Ketomaa finished an impressive second overall in October's Malaysian Rally, the Mirage proved it was ideally suited to the tough and varied demands that are encountered in this long standing and highly regarded championship.

For MPart, the added appeal of contesting the APRC's six rounds in Australasia, India and the Far East, is the acceptance by championship officials that the Mitsubishi is eligible to battle for overall positions and championship points alongside homologated R5, R4 and NR4 cars in Class AP4, as MPart boss Tomas Weng explains:

"The Asia Pacific Rally Championship provides a great showcase for our Mitsubishi, as it is given parity against cars of the same specification that it wouldn't otherwise have in the WRC, ERC and some domestic rally championships.

“Therefore, it is of great interest to us to be able to compete on a level playing field against other cars of similar specification and therefore challenge for overall positions and the championship title.

"Another major attraction of the APRC is in light of our result in Malaysia last year. It confirmed the car is competitive and, if we can repeat the same performance in other events, then I'm confident we will be able to score even more podium results." 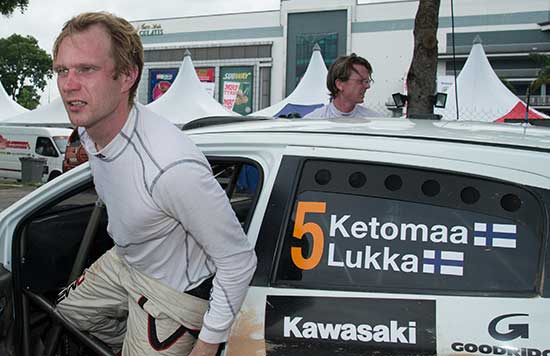 Jari Ketomaa.Whilst he admits that last year’s Malaysian event was tough, Ketomaa, is excited about the challenge of contesting a whole season in the APRC:

“In all my years of competing, I have never driven a tougher event than last year’s Malaysian Rally. To get through it and finish second was a fantastic achievement for all of us as a team and testimony to the durability and performance of the car.

“I am extremely motivated about the Asia-Pacific Championship. I would really like to win it - and I think as a team we can win it. It’s a very high profile championship and to add an FIA title to my CV would be fantastic.”

Ketomaa added that competing in this championship sends out an important message for MPart and its cars:

“Tomas and his team have a set up in Sweden that is worthy of any manufacturer-backed operation. Therefore, competing in the APRC can establish the company as a major player in the motorsport industry and is another step towards other high profile global campaigns in the future.”

Blomberg, with his co-driver Lars Andersson, will run the same Mirage that they used with great success in the UK in 2016:

“Competing in the UK last year was a completely new experience for me. Now I’ve done that, been there, it’s time for something else and, when Tomas said he was considering a season in the Asia-Pacific Championship, I thought well, why not! I enjoy new challenges and, having spent some time working in the some of the countries where the APRC takes place, rallying over there was already on my bucket list.

“The Mitsubishi has proved it can be competitive in the region, so I hope I can help Tomas to promote the cars there and, together with Jari, we will try our best to win the constructor title for the team.”

The two Mpart Mitsubishis have now left Sweden and are currently on a six-week journey to New Zealand for the first round of the APRC, the Rally Whangarei from April 28-30.