2014 is the 30th anniversary of George Fury putting Nissan’s Bluebird Turbo on pole position at Bathurst in 1984. But long before Fury was a touring car star, he had already established himself as one of Australia’s greatest ever rally drivers.

Jeff Whitten looks back over the career of the Talmalmo famer.

George Fury was a Datsun rally star long before he set the lap record at Bathurst in 1984.It’s the year 2014 and George Fury is now 69 years old, a fact that you would assume he doesn’t like to be reminded of too often.

These days he has melted into the background of his farm alongside the Hume Weir at Talmalmo, on the NSW side of the Murray River, near Albury. It’s a huge change from those heady days of the seventies, eighties and nineties when he was hot property, not only on the rally scene, but on the smoother tracks of major race circuits around the country.

As a leading works driver for the Datsun (later to become Nissan) Rally Team, Fury displayed devastating form behind the wheel of the company’s Datsun 710s and Stanzas, before giving up rallying for a career in touring car racing, driving a Nissan Bluebird Turbo in the Australian Touring Car Championship.

His fame spread far and wide at the height of his career – how couldn’t it with an evocative name like Fury, which conjured up all sorts of mind pictures of someone driving flat out like the wind? His surname fitted the man perfectly, but he also had a more mundane side as well, driving the school bus along the banks of the Hume Weir to take the local kids to school each day, or tending his sheep on the family farm.

Widely regarded as the brightest star on the rally scene in his heyday, Fury enjoyed success as well as disappointment, both on the loose and tarmac, finally retiring gracefully to raise cattle and sheep on his farm with partner Margie.

Forty five years after his introduction to rallying, the name Fury is but a pleasant memory for many of today’s older rally and race fans, but for those of us who can remember the Fury era and the pitched rally battles that became his trademark, it will go down in history as one of the most exciting periods of rallying.

A shame, though, that so many of today’s rally fans never had the opportunity to watch the master in action and are prone to ask “George who?”.

George Fury burst onto the rally scene in 1971, thanks to watching cars in the 1968 London-Sydney Marathon flash past. The sight of cars being driven flat-out on the dirt sparked his desire to get out and have a go himself.

Born in Hungary, the be-specalled Fury arrived in Australia with his parents at the age of 13 and grew up with a farming background. Forming a friendship with Monty Suffern, then a Swinburne (Melbourne) university lecturer, the pair started competing in local rallies in a Mk.1 Ford Cortina with a 1300cc engine. This was later replaced with a 2-litre engine and results immediately started to come their way, not just because they had a powerful car, but largely because of Fury’s skill.

The pairing’s first win was in 1973 when they won the Akademos Rally in East Gippsland, but by then the old Ford was getting long in the tooth and more modern and competitive machinery beckoned.

Already starting to be noticed for his outright speed and car control, Fury was loaned a works Datsun 180B ‘SSS’ for the Southern Cross Rally, the most important event on the Australian calendar at the time. After a dogged and determined drive, Fury brought the 180B home in fourth spot after fighting tooth and nail with the likes of eventual winner, Andrew Cowan, and second-placed Joginder Singh.

Now establishing himself as a driver of the future, Fury won the Australian Rally Championship jointly with Ross Dunkerton (another Datsun works driver at the time) and went on to finally stake his name on the Southern Cross by winning it against a sustained European driver onslaught in 1978 and 1979. In doing so, the quietly-spoken Fury became the first Australian to win the event in seven years. 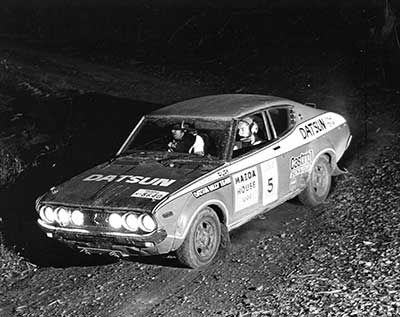 It’s on record that Fury was the one to break Greg Carr’s stranglehold on the Castrol International Rally, ending Carr’s record six straight wins.

Most of Datsun’s effort went into the ‘Cross and it was this long, arduous four-day event that really brought out Fury’s best. For 1975 the team entered a trio of the new Datsun 710 ‘SSS’ Violet rally cars for Rauno Aaltonen (Finland), Harry Kallstrom from Sweden and Fury/Suffern. One by one the Violets dropped out with engine failure, Fury’s being the last to retire on Day 2, but he had already shown his potential.

The 710 made another appearance the following year and saw a ding-dong battle for outright honours between Fury and Scotsman, Andrew Cowan. Fury led for three days and was equal with Cowan on the final day when the Datsun’s differential broke not far from the finish.

‘Third time lucky’ wasn’t part of the script in 1977. Again in a 710 Violet, George was third for most of the event and was attacking for the lead behind Aaltonen and Kallstrom, but on the very last stage of the final day, he rolled out of the event and out of the placings. It was a bitter pill to swallow after such a dogged drive.

By 1978 Nissan had discontinued their most successful rally car ever, the 710 SSS, and had commenced development of the new Stanza. Under the guidance of the legendary Howard Marsden, who headed up the Nissan Rally Team in Australia, a concerted three-month development program was undertaken to ready the new car for the demands of rallying.

Nissan returned for the ’78 ‘Cross with four Stanzas, two Japanese-prepared cars for Rauno Aaltonen and Kallstrom, and two Howard Marsden Australian-built cars for Fury and Dunkerton. Fury’s was a Group 5 car, Dunkerton’s a lower-powered Group 2.

After three previously unsuccessful attempts, 1978 looked like being Fury’s year. The rally’s first stage at Amaroo Park in Sydney was won by Aaltonen, but by the second night he was out of the event, followed by Kallstrom who retired with engine failure. Fury led from the second stage and was never headed to the finish, clinching a popular victory for the modest Talmalmo farmer.

He and Suffern repeated their class act a year later and were the hottest act on the calendar. Fierce opposition came from the other two leading factory teams at the time, the Colin Bond-run Ford Rally Team and the powerful Mitsubishi Ralliart team from Japan. But some great drives and a little ‘Marsden magic’ saw Australians and Australian-prepared cars become world class players. 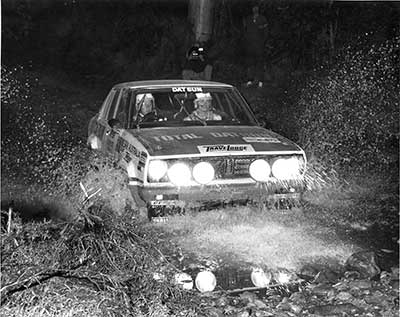 Fury and the Datsun Stanza on their way to victory in the Southern Cross Rally.Winning on your home patch is one thing, but winning on the world stage is another, and while the quietly-spoken Fury never won a World Championship rally, he placed a fighting fourth overall on the 1980 Motorgard Rally in New Zealand. In extremely notable company, Fury brought his 160J Stanza home behind Timo Salonen (also in a Stanza), Walter Rohrl (Fiat Abarth 131) and Hannu Mikkola (Mercedes Benz 500 SLC).

It’s on record that it took Fury just four years to go from complete novice to become the winner of Australia’s most prestigious rally (and an International one at that), the Southern Cross, and three years to be an Australian champion. Surely this is an achievement unparalleled in rallying in Australia, either before or since.

However, Fury’s career didn’t end at that point. More rallying was to come and more victories to be savoured, but by the time 1981 arrived, he had effectively ‘been there and done that’. So when Howard Marsden offered him a drive in the new circuit-racer Nissan Bluebird Turbo, his road ahead turned from gravel to bitumen.

Nissan’s new Bluebird was the hottest thing to come on the racing scene for some time and Fury was keen to broaden his all-round driving skills. The big-budget Nissan team, again under Marsden’s guidance, aimed to win the Australian Touring Car Championship and the legendary Bathurst 1000 race.

With a string of exciting drives against the established circuit racing stars in the following years, Fury and Nissan were placed second in the ATCC series behind Allan Moffat’s Mazda RX7, a great result by anyone’s standard. But the following year was less successful, not through any lack of ability on Fury’s part, but because of the increasing speed of the new breed of cars in the championship.

Fury and the Bluebird finished 11th in the 1984 ATCC, signalling the end of Nissan’s involvement in circuit racing, but not before setting a famous lap record and taking pole position at the Bathurst 1000 in October. The introduction of the Group A category the following year ended Group C, in which the Bluebird had been so dominant.

Sitting on the sidelines for a few years wasn’t the way Fury probably wanted to end his career, but there was a less-than-happy split with Nissan and the touring car racing program, yet farmer George accepted it gracefully. But there was still one more point to prove on the rally roads of Australia – that of mastering a 4WD rally car on the loose.

When, in 1990, Wodonga’s Ged Beckton offered Fury a drive of his new Mitsubishi Galant VR4, the deal was cemented on a handshake. It was never the intention that Fury should do the whole ARC season in the car, just two events before the car was handed back to its owner to drive.

The first event was the BP Rally Tasmania early in 1990 and Fury, together with co-driver Ross Runnalls, took a first-up win by almost three minutes, proving conclusively that the master had lost none of his touch.  On a high after their win, the pair took on the BP Alpine Rally a few months later and, despite battling with turbo problems for most of the event, took out their second win on the trot, this time the margin over second place was a staggering 6 minutes 32 seconds.

In what was a wet and miserable event, Fury won 22 of the 37 special stages, but it was his last competitive drive.

George Fury, the quietly spoken bus driver-cum-farmer, simply hung up his driving gloves and retired to his farm by the lake. He’d proved conclusively that he still retained all of that awesome style that he’d displayed during his long career at the wheel.

Now it was time to put it all behind him. After all, with a name like “Fury”, there was little point in staying around until he became just another driver, and in any case, there were by then other more important things in his life.

Yet there is no doubt that George Fury was one of the most gifted drivers in Australia during the 70s and 80s. For George, quitting while he was still on top was the way he wanted to end it all.