The Team MRF pairing of Gaurav Gill and Glenn Macneall have taken their second consecutive win in the 2016 Asia-Pacific Rally Championship, winning a rain-shortened International Rally of Queensland on June 18 and 19.

Gaurav Gill (right) and Glenn Macneall celebrate their victory in the Rally of Queensland.The Indian-Australian combination led from start to finish in their Race Torque prepared Skoda Fabia R5, eventually taking a victory of just under two minutes from their team-mates, Germans Fabian Kreim and Frank Christian.

Gill set up his victory on the relatively dry first day on Queensland’s Sunshine Coast, and was hoping for an easy day two to conserve his advantage.

However, torrential rain hit the state on Sunday morning, drenching the stages and turning the roads into mud baths that were difficult to drive on. As a result, four of the day’s stages were cancelled for safety reasons.

The win is Gill’s second in a row, and puts him on track for his second Asia-Pacific Rally Championship title for Team MRF.

“My aim is to repeat my title win of 2013. Victory in Australia was an important step in that direction,” he said.

“It was extremely slippery, but we found the right rhythm and our Skoda Fabia R5 remained fast and reliable to the finish, even in these extreme conditions.”

Second place was a tremendous result for Kreim on his first visit to Australia and on stages that he knew little about before arriving.

“They call it the Sunshine Coast? The rain and mud made my second gravel rally even harder, especially as we were not familiar with the stages,” he remarked.

“So I am more than pleased with my second place in the APRC.”

The conditions made staying on the road an achievement in itself, but the Skoda Fabia R5 and the MRF Tyres were up to the task, and now put Team MRF well ahead in the battle for the Manufacturers’ Championship. 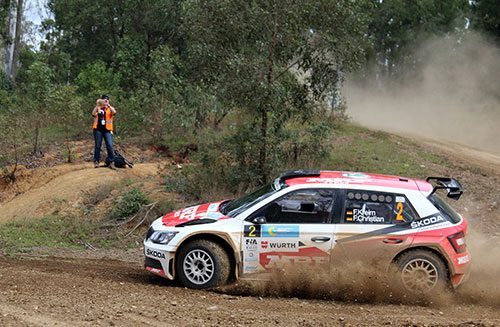 Gill masters the wet and muddy conditions on day two of the Rally of Queensland.“The conditions were wet and slippery, and more like what we would expect in Malaysia,” team boss Lane Heenan said.

“The forecast was for heavy rain, and we knew that ensuring that both cars got to the finish was going to be important to our championship aspirations.

“Gaurav drove brilliantly once again, while it was a real baptism of fire for Fabian on an event that is usually dry and dusty.

“The result puts us in a good position as we head for the next round of the championship in China in August.”

Third place in the APRC component of the event went to New Zealanders Mike Young and Malcolm Read in a Subaru Impreza WRX STI, a further 45 seconds behind second placed Kreim.

Gill’s victory has increased his lead in the APRC to 16 points from Kreim, followed by Young, Japanese driver Makoto Kawahara and Australian Nathan Quinn.

Competitors now have a six week break until round three of the championship in China on August 6 and 7.