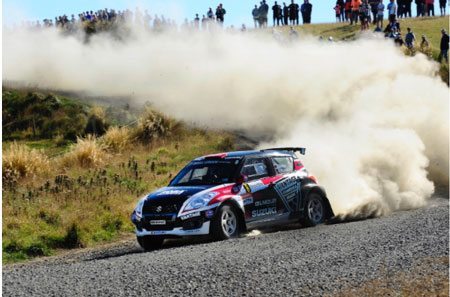 Emma Gilmour barely touched down in Dunedin after five days racing in the Qatar desert, before it was time to pack up her Vantage Windows and Doors Suzuki Swift Maxi for the International Rally of Whangarei this weekend.

She returned to New Zealand on Sunday after an incredible experience competing in the 1650km Sealine Cross Country Rally, racing a Nissan Safari across the sandy, rocky landscapes of Qatar from April 17 to 22.

She was given the fully-funded entry after winning an international competition last year – the inaugural FIA Women in Motorsport-QMMF Women’s Cross Country Selection – to find a female driver and co-driver to contest the tough long-distance event. Lisette Bakker from the Netherlands was chosen to perform the navigation duties.

Bakker and Gilmour received guidance from Jutta Kleinschmidt, the only woman to have won the Dakar Rally, and multiple rally and cross country winning co-driver Fabrizia Pons during the event.

“We were so lucky to have their help to enable us to get to grips with racing non-stop for up to six hours some days, over distances of 350km. It was pretty full on at times as we dodged camels, had a GPS unit fail and lost a wheel on our vehicle. It was a once in a lifetime experience and I would love a chance to do it again,” Gilmour added.

Gilmour and Bakker’s off-road car was kitted out with cross country rally prerequisites, like a large shovel to dig themselves out if they became stuck and they had to negotiate steep sand dunes that towered several storeys high in some stages.

“While many of the roads were dirt they had a sandy base and were sometimes bony with rocks poking through. We had to be careful and really nurse the car through some of the rockier sections. Unfortunately the car let us down mechanically in the end, so we couldn’t finish the event,,” she said.

“I’m looking forward to Whangarei, as we’ve had some good results here in the past and it would be really nice to have a good finish and get some points on the board. Until our turbo broke at the Rally of Otago earlier this month we were going so well and showing some great speed behind Hayden Paddon.”

“After cross country rallying for up to 350km a day in Qatar, it will feel odd competing in an event where we cover just 270km over two days,” Gilmour added, laughing.