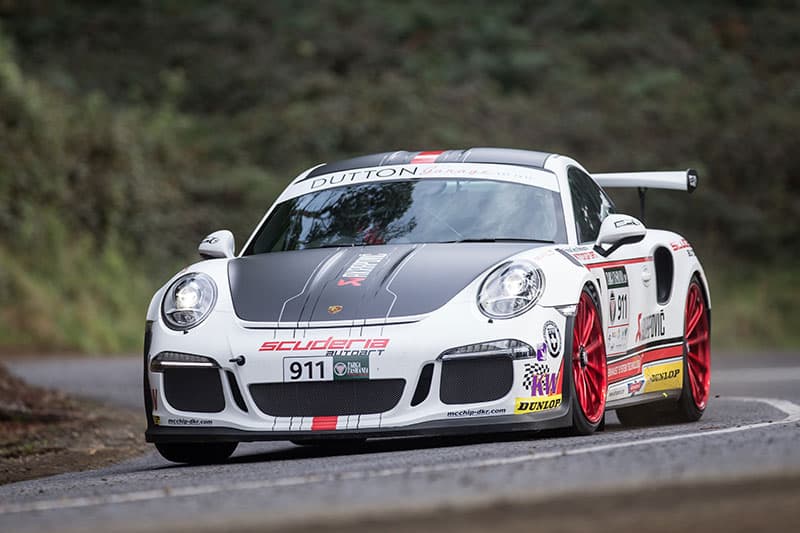 Matt Close has taken the lead in Targa Tasmania on Day 3.

Matt Close has jumped into the outright lead after pacesetter Steve Glenney crashed on the penultimate stage of Day 3 at Targa Tasmania.

Glenney and co-driver Dennis Sims (Lotus Exige 350 S) had led the opening two days but speared off the road and into the trees 600m from the finish of the Elephant Pass stage on the run to St Mary’s.

The drama meant Close and co-driver Cameron Reeves (Porsche GT3 RS) ended the day with a 44 second lead in the race for outright and Dutton Garage GT2 honours.

“It’s not the way we wanted to take the lead. We know what it’s like to crash out after last year,” Close said.

“It’s a real shame from a battle point of view that we’ve lost Jason White and Steve (Glenney).

“But there’s a hell of a lot of rally to go and we’re certainly not taking anything for granted.”

Hobart surgeon Michael Pritchard and co-driver Gary Mourant are second in another Porsche GT3 RS while Paul Stokell and Kate Catford have chipped away solidly to be in third, a further 11 seconds away.

“It’s an interesting start to the event in a lot of ways, but there’s still a long way to go, and it’s going to be wet for the next few days,” Pritchard said.

Rain is certain to play a role for Day 4 which begins with the Cethana stage before heading to Riana and the lunch stop at Burnie.

The iconic tarmac rally then heads out to the iconic Hellyer Gorge stretch ahead of the return of Reece Dam which ends the leg four action with an overnight stop in Strahan.

After their electrical problem in the Dodge Viper yesterday, which cost them a 10 minute penalty, Jason and John White strung together four wins from the day’s six competitive stages.

While the pair moved from 87th to 34th overall, their task of claiming a record eighth outright Targa Tasmania victory remains well out of reach as they are 9min17secs in arrears.

Showcasing classic Australian 1970’s machinery, the Downey car has waged a pitched battle against the Brays with the Commodore leading by just one second at the end of day three.

Bray is relishing the fight after the Torana and Commodore traded places at the top of the class leader board across the day.

“It’s so tight it only takes a slower car in front of you for a second, or a bonnet clip come undone like we did, and the lead changes just like that. We’re having so much fun.”

Jon and Gina Siddins have enjoyed another solid day in their 1970 Datsun 240Z and remain third, a further 59 seconds back.

Graham Copeland and Josh Herbert continue to hold sway in Shannons Classic handicap competition, however their campaign will become compromised if the inclement conditions drench them in their open-wheel 1941 Jimmy Special.

In the GT4 ranks, Angus Kennard and Ian Wheeler (Nissan GTR R35) have managed to extend their lead over Paul Dowie and James Marquet (Audi TT RS) to one min and 31 seconds. Kennard also sits in fourth outright.

Dutton Garage Early Modern saw a lead change with Guy and John Lilleyman moving to the top in their 2006 Mitsubishi IX after Peter Nunn’s run ended on Elephant Pass with mechanical problems in his 1991 Porche 996 Turbo.

In Trophy classes, the Budget TSD leader continues to be Darryl and Peter Marshall (2002 Ford Pursuit Ute) with 16 points, eight ahead of Peter and Tristan Taylor (Lotus Elise S).

There is a tense fight continuing in Country Club GT Sports Trophy with Tony and Sandra Seymour (2017 Lotus Exige Sport 350) clutching a tenuous five second lead over Steven Sher and Fergal Murphy in another Lotus Exige..

The Shannons Thoroughbred Trophy field is topped by Jack Waldron and Vin Gregory in their 1981 Mitsubishi Sigma, with a 1 minute 39 second buffer over Tyson and Celise Cowie in a Ford Escort Mk 1.