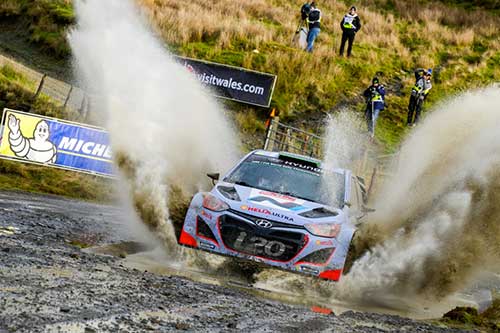 After 10 months, starting in the snow of Sweden (for us), through the European summer and now to the British winter, it is almost time for the championship finale here in Wales.

It’s a rally that we all look forward to every year and is a place where we almost feel at home – having first competed here in 2007. Since then we have done the rally 5 times, and despite the different stages and routes, one thing that remains consistent is the mud.

In fact without the mud, it wouldn’t be a true Wales Rally GB and it is one of the characteristics that make this event so special. Despite the slippery conditions, the stages here are generally very fast forestry roads, which I enjoy. I would describe this rally as a driver’s confidence rally – if you have confidence in the changing grip levels and slippery sections then you will be fast.

To help find this confidence, we have had a small half day test here in Wales to adapt both my feeling to the roads and the car set-up. Last year we really struggled on the first day due to a lack of traction/grip, so this is an area we focused on at test and improved a lot. So we are happy that we are in a better position going into this rally.

Between events it’s also time to focus on preparation, fine tuning previous years’ pacenotes and putting plans in place. For the last two rallies I have also been working on refining all our systems, from preparation, training, pacenotes etc., as a bit of a dress rehearsal for next year. In this game we are always learning and always striving to improve – as if you’re not going forward you might as well be going backwards as everyone else passes you. For us, this is not an option.

As we are scoring manufacturers points for the team this rally, who are fighting for second in the championship, there is a lot of talk about being more pressure on us. But whether we are scoring points or not, the target is always to be as fast as we can.

Realistically the best way for the team to try and regain second in the manufacturer’s championship is that we score big points. To do this we have to push and will try and target a top five – although here that will not be easy.

Generally our lower road position is a small advantage, here it is the opposite as more and more mud gets pulled onto the road. However, this is not something we will complain about – instead, we’ll push as hard as we can with the conditions that lay in front of us.

I think secretly I’m hoping for some bad foggy conditions, as in the past we have always been quite competitive when visibility is low. Here in GB, it is not unrealistic to think it could be quite foggy high up in the forestry hills.

Also, since Spain it was really nice to get some more test and development work with the new 2016 car. The team are working extremely hard and the early signs for the car are very positive.

It was also good at the end of our test in France to tune in and watch the last half of the epic Rugby World Cup final. A lot of the French people in our team were all cheering for the All Blacks!

Prior to this event, we got in the swing of things with something that is a little closer to home – sheep shearing. Check out the video here: https://youtu.be/7UosmxAwK5c

As always we will keep you posted after the rally. To follow our progress during the event, you can find all the quick links on our website, www.haydenpaddon.com