Leigh Hynes has won round two of the WA Rally Championship (WARC), the Trade Hire Donnelly Rally near Bridgetown on Saturday. It was a convincing win for the reigning champion who was fastest on eight out of nine stages over the fast, forestry roads around the Donnelly Mill near Bridgetown. 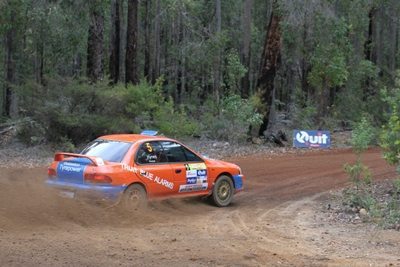 “We went absolutely flat out and the car performed so well,” he said.

“We had a lot of work to do before the event but our service team did a fantastic job.”
Hynes said he needed a win after retiring from the season opener, the Quit Forest Rally (QFR), last month. He rolled his Subaru WRX on the first stage.

Dylan King, who had a slight off in his WRX on stage two of the Trade Hire Donnelly Rally, finished second and John O’Dowd, also in a WRX, was third.

The event’s long list of casualties including John Macara, who was in third position when his Mitsubishi Lancer Evo VII suffered a broken differential, and Brad Markovic, who was fourth when his WRX snapped a rear suspension arm.

Doug Tostevin and Stephen Oxley both retired close to the end of the rally. Tostevin’s WRX had mechanical issues while Oxley’s left the road.

Sean Keating was again the fastest 2WD competitor in his Nissan Silvia and was pleased to have a drama-free event.

“We have a pretty clean run and a good battle with Raz (Vlad) up until the last section,” he said.

Razvan Vlad recorded his second DNF for the 2014 season when his Ford Fiesta suffered a broken drive shaft on stage eight.

In the 2WD Challenge, Andy van Kann and rookie co-driver Abbey Hayes (Floreat) were victors in their Toyota Corolla, while Nathan Pearce went out early after his Toyota Celica collected a big stick in its grill.

The Trade Hire Donnelly Rally Clubman Cup category was won by Mark Traverswho had a dream run in his Toyota Sprinter.

“It was a great event with no dramas from start to finish,” he said.

“It was good to get some time in the car with my new co-driver Lachlan (Beresford).”

Travers claimed five out of six fastest stage times while Carl Rattenbury, who finished second in a Ford Escort, claimed one.

Rookie Shane Harmer (Holden Commodore VH) was third in the Clubman Cup after Mathew Gerdei’s  Datsun 180B succumbed to electrical issues on the second last stage.

The next WARC event is the inaugural Newmont Boddington Gold Rally in just three weeks.
The rally runs over the former ‘Bunnings stages’ that former champions Colin McRae, Petter Solberg and Marcus Gronholm flew over when WA hosted Rally Australia.

Reconnaissance for the Newmont Boddington Gold Rally is on Saturday May 31 with competition to be run on Sunday June 1.

Results are available on www.rallywa.com