Insight: 1995 Round Australia Trial, according to Ed Ordynski

1995 Round Australia Trial winner, Ed Ordynski, writes exclusively for RallySport Magazine about the planning for the 18,500km marathon, and how Holden went about their historic win. He also reveals how Holden's PR team had written him off midway through the event .... * * * * * Waiting at the start of the 1995 Mobil 1 Round Australia Trial, I admit to thinking a little of the enormity of a 20,000km rally. However, my main focus was on the difficult job I was expected to achieve for the team on the first three legs from Brisbane to Adelaide via Sydney and Melbourne, using traditional rally areas which I knew well. Almost a year prior to that day, I had received a confidential phone call from Holden, asking if I had interest in joining the team – a sounding-out to see what was possible and if my Mitsubishi contract could allow it. That was followed quickly by a call from George Shepheard. George was much more specific. He said he had a particular task for me. Keep in touch with the four-wheel-drive rally cars down the east coast and across to Adelaide – the early part of the event. In a relatively standard V6 Commodore. Without breaking it. George had obviously put some research into this. 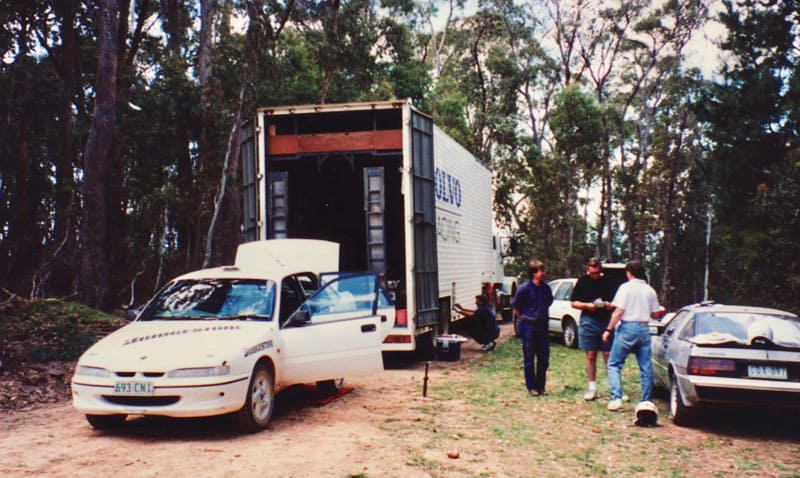 Testing for the Commodores prior to the Round Australia Trial. All photos: Ed Ordynski collection

He thought I fitted the task because of my Group N rally successes which required speed in a production car, while looking after it over multi-day events. He’d recognized I was physically fit, mentally tough, excelled on night stages and drove to a strategy. Having spoken with Les Walkden, he’d heard that I was able to alter the strategy on the run without consulting the team, if something out of left-field occurred. That was considered super-important. George recognized that a V6 Commodore couldn’t cut it on speed but his aim was to provide every opportunity to win, building a test car, an extensive test program, strong back-up team, many from the winning 1979 Round Australia squad, proper budget from Holden Motorsport, and common sponsors I already had in Mobil, Bridgestone and Hella. Other than the car itself, it seemed a perfect fit. But George was clear from day 1. We had to be near the front, certainly top six, on the traditional rally stages – we couldn’t afford to be in catch-up mode in the rough and remote outback. The many months pre-event was an incredible experience. Jamie Drummond (DMS) and Murray Coote (MCA) joined the team. Can you imagine having George Shepheard (himself a suspension expert), Jamie and Murray all trying to make the car the best it could be?

I remember standing on a Queensland cattle station with Peter Brock during one test and he just said, “How good is this, Edward.”

George didn’t announce the three-car, team-members until much closer to the event. The Holden budget was for two cars, but George expected to run a third with external funding. 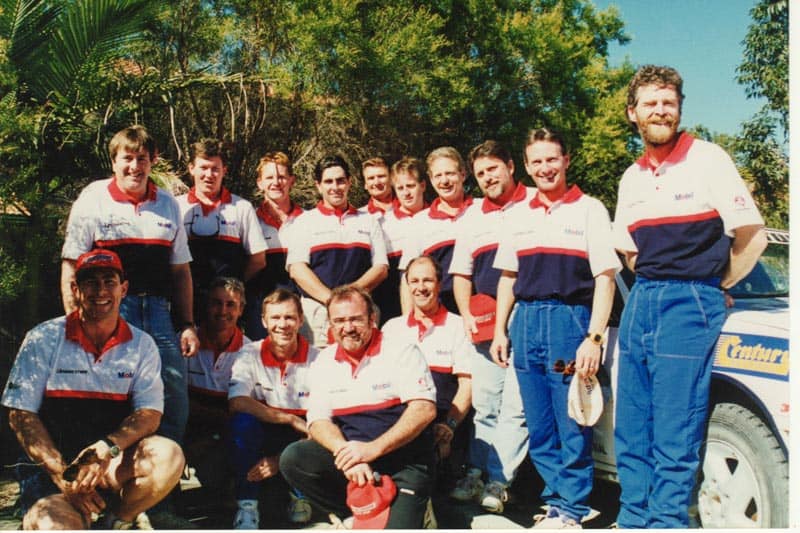 The winning Holden team from the 1995 Round Australia Trial.

Brock and I were in from the start, but there were many outstanding drivers given testing time and George was also going to choose the co-drivers or navigators. At one point, Murray was going to be my co-driver, George having thought that it might be good to have one car with two strong drivers to sprint. Murray is not a good passenger, especially with me. We get on really well, but he was always uncomfortable with my going right out wide and using the whole road, loose chips, edges, verges etc, on approach to corners (and the exits too) that had developed from keeping momentum up in slow production cars. Then Murray was going to be driving the third car. Next it was David Officer. Both would have been fantastic choices. Finally, the Castrol backing appeared for Ross Dunkerton and co-driver Noel Richards. Brock and Dunkerton in the same team was always going to be a marketing dream, let alone in a marathon rally in which both excelled when last run in 1979. For me, I thought it was incredible. I had, of course, been team-mate to both on previous occasions – with Ross at Team Mitsubishi Ralliart and with Peter quite close to the Round Australia, when Volvo ran a two-car team in the Eastern Creek 12 Hour Race, with Brock and Tony Scott in one car and British touring car master, Win Percy and me, in the other.

I looked up to both Brock and Dunkerton enormously and was even more inspired to focus on doing the best I could in a truly professional super-team.

Dave Boddy was selected by George to go with Brock, based on his performance in the 1979 event (2nd outright), the great recommendation of Barry Ferguson, and his continuing, front-running co-driving with Wayne Bell. George placed a high emphasis on Dave’s personality being a great fit with Peter. 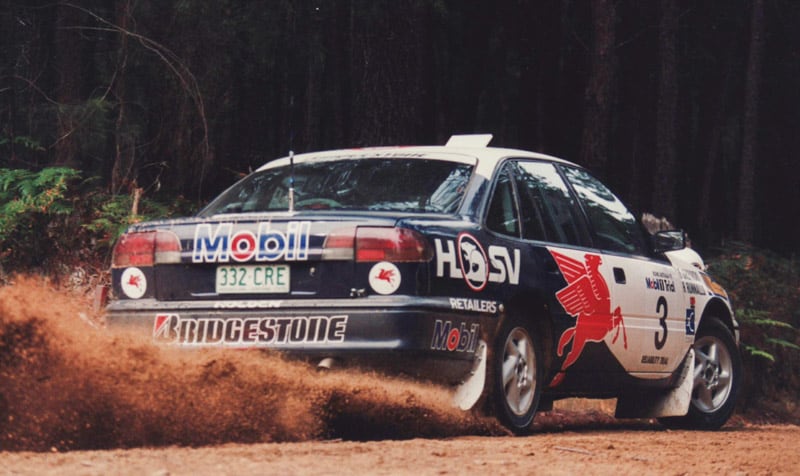 Next, I was informed my co-driver would be Ross Runnalls. I was quite surprised as I hardly knew Ross. George explained that he had learnt throughout testing that I was fine at mechanical repairs and didn’t need a co-driver to keep me focused on strategy. I did need someone of the appropriate personality who would make sure we went the right way. I had no experience of the outback and needed what George said was, “A Proper Navigator”. Like all drivers, I can sometimes be quite highly strung and George reckoned the laid-back Runnalls would be immune to that and do a great job. It was an inspired choice. I could not have wished for better. Ross and I are different personalities, but he is a true professional and that professional distance, plus his outstanding expertise, was actually a great asset when you spend three weeks, under high stress conditions, in a car with someone. My friendship with Ross has evolved since the event and we still catch up nowadays. Testing was now underway on a regular basis. I did a great deal of that due to my familiarity on the Ralliart Group A cars with the Drummond Liquid Cooled Suspension, which we also used on the Commodores – struts and shocks with their own cooling system of pumps and radiators.

I also played a role in getting the limited slip differential to behave properly, both accelerating and lifting off the throttle, to facilitate the straightest possible, racing-line style of driving.

At the recent reunion for the 1979 Round Australia, I met Matt Philip, who was the winning driver of that event with Peter Brock – their car had three crew members, Brock and Philip as drivers and Noel Richards as navigator. Matt told me that very early on in testing for 1979, Brock sat everyone down and explained the straight, racing-line style of driving which he believed was faster and would minimize punctures. Matt, himself a talented driver, committed to it. All those years ago, Brock was right on it and Matt executed perfectly. I did occasionally wonder why Brock, in all the testing we did together, sometimes riding in the car with each other, never mentioned my driving style – I guess I found out in 2019 from Matt! Murray Coote and George put massive effort into ensuring the rear suspension behaved properly when the fuel tank (180 litres) was both full and running low – quite a feat. Murray was the first to do an actual rally in the test car at Coffs Harbour. It ran almost flawlessly and he was fast. 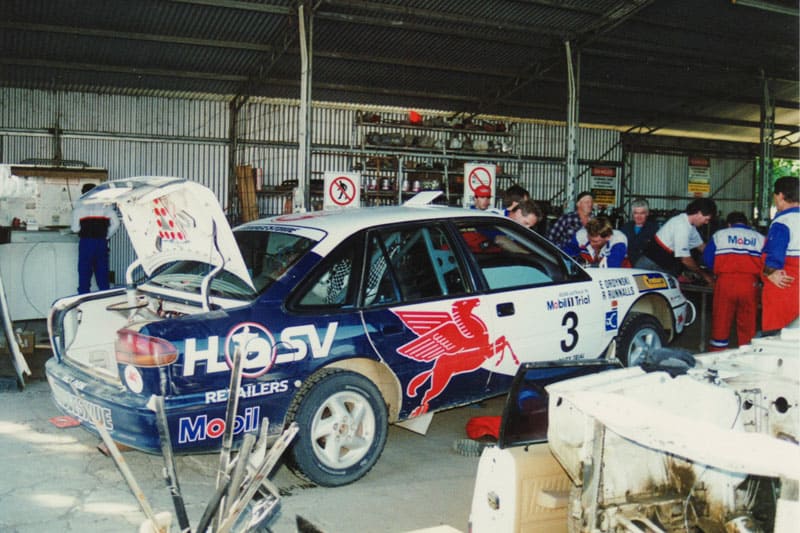 Closer to the Round Australia, Ross Runnalls and I ran the test car in the Gallangowan Rally in Queensland. It was a state championship event, a proper shakedown and we worked primarily on fuel consumption, while seeing how hard we could push on the traditional rally stages. We were in the lead at times and finished second to Stewart Reid and Iain Stewart in a Celica GT4. It was encouraging, especially as the event became quite wet and slippery. At the same time as all the Round Australia testing, I was not only doing a huge program of events with Mitsubishi, but also had a continuing role as a tyre evaluation driver for Bridgestone. The main part of that was for Holden Commodore original equipment tyres. I probably spent more time in Commodores than the fastest rally drivers, like Jim Middleton, who were using Commodores on a regular basis. In particular, for Commodore road tyre development, we did wet-circle testing on a large, marked, circular skid-pan where you have to get the car up to the limit of adhesion evenly, both front and rear. Data logging records all the various levels of grip and driver input and you have to do four laps without altering throttle or steering input while on that limit. That was great practice for the Round Australia. After we had finished the testing, I sometimes had a shoot-out with tyre engineer and chief test driver, Tony Dorrington, to see who could do four laps on full opposite lock without changing throttle or steering inputs. Bridgestone played a huge role in our Round Australia success, developing a tyre specifically for the Commodore and that event. Bridgestone Motorsport engineers attended every test, headed by Graeme ‘Mort’ Brown, Brock’s long time Race Operations Manager, and Kevin Fitzsimons, who was on our Mitsubishi ARC team with Bridgestone – Kevin went on to become the Dunlop Motorsport Operations Manager and is still in that role at Supercars nowadays. 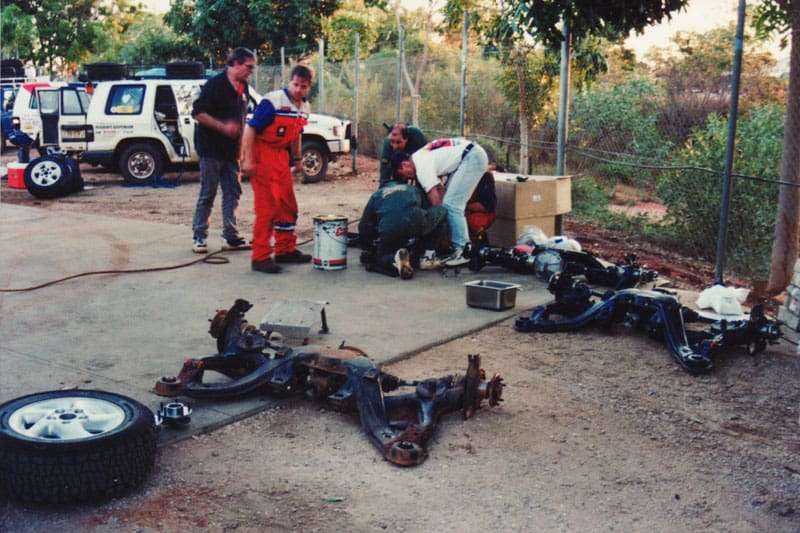 With car preparation in such great hands as George Shepheard; proper funding from Holden; suspension engineers of the calibre of Murray and Jamie; dedicated tyre engineers from one of the biggest tyre companies globally; great mechanics, many from the winning team in 1979; and a great co-driver in Ross Runnalls, you can see why all I had to do was follow the strategy. We were fourth down the east coast to Melbourne and first of the Commodores into SA, moving up to third; second by Alice Springs and took the lead (from an incredibly well driven Mitsubishi VR4 of Michael Guest and Rod Salmon) on the 2,500km leg from Perth to Broome.

Here’s a little known secret. When we got to Adelaide, Brock and Dunkerton had suffered several problems and were well down, time-wise.

A Holden corporate person asked me if I’d competed in the far north of SA, and I replied, “No”. He asked if I’d competed outside the Perth region or up through Broome, or in the Northern Territory. How about Northern Queensland? It was “No” to all. When we reached Alice Springs, I found out from George that in Adelaide, Holden had withdrawn most of their PR team covering the event as it was reasoned we (Holden) had no chance of winning, with only the ‘east coast forest rally specialist’ still in touch with the front-runners. I must have looked completely downcast and George said, “This is great – we don’t have to put up with them. Just watch, they’ll be back by Darwin.” And they were! – Ed Ordynski 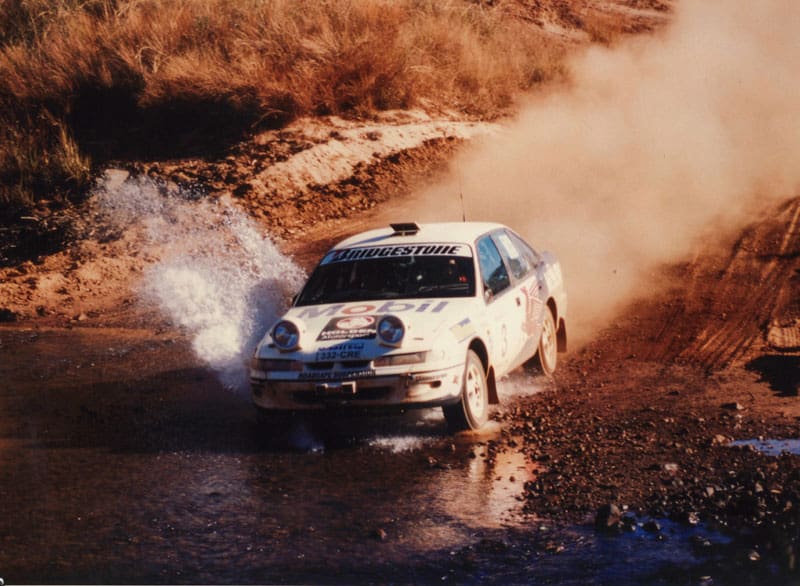 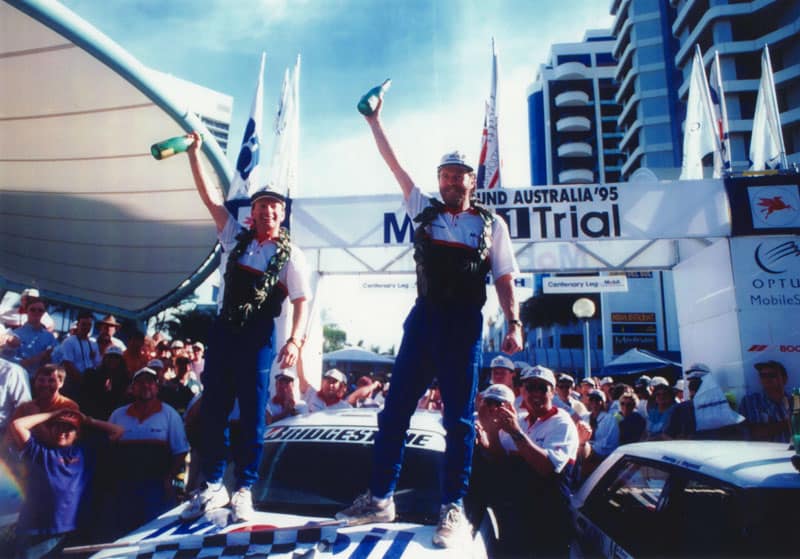 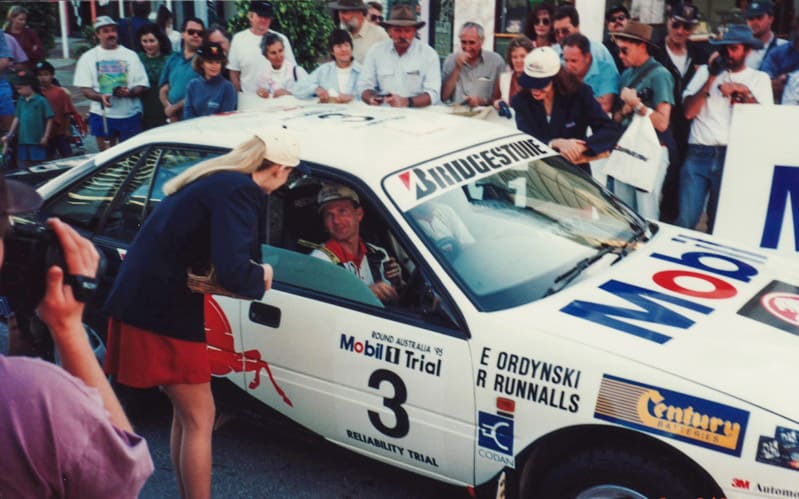 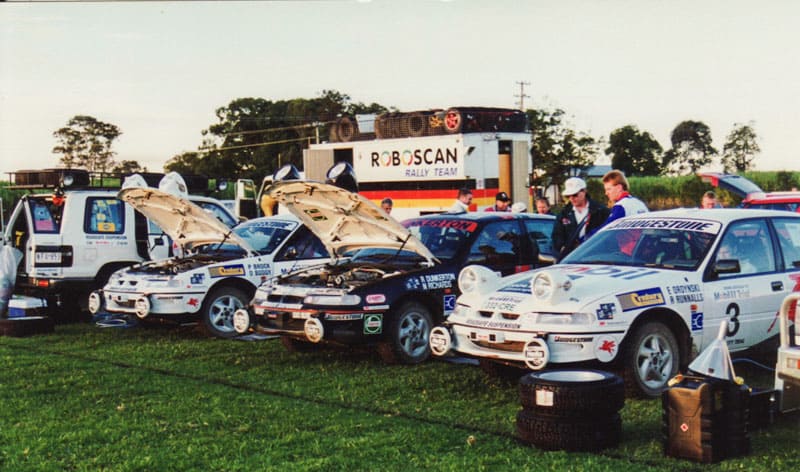 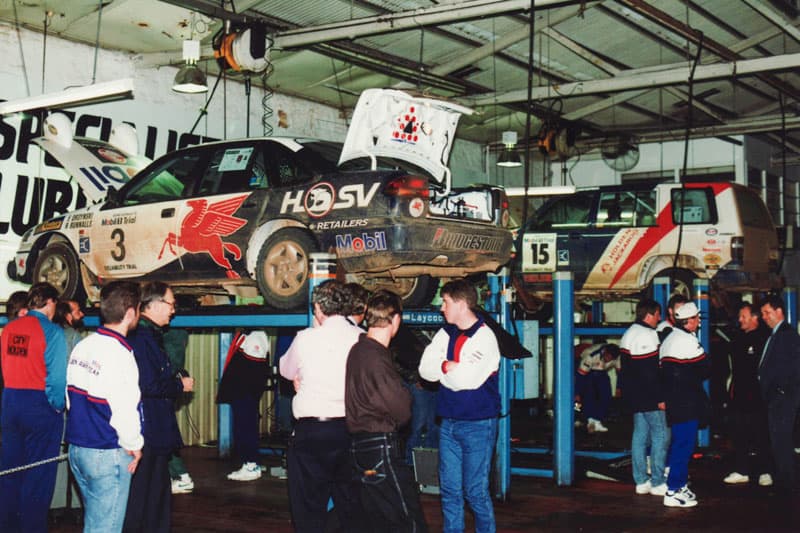 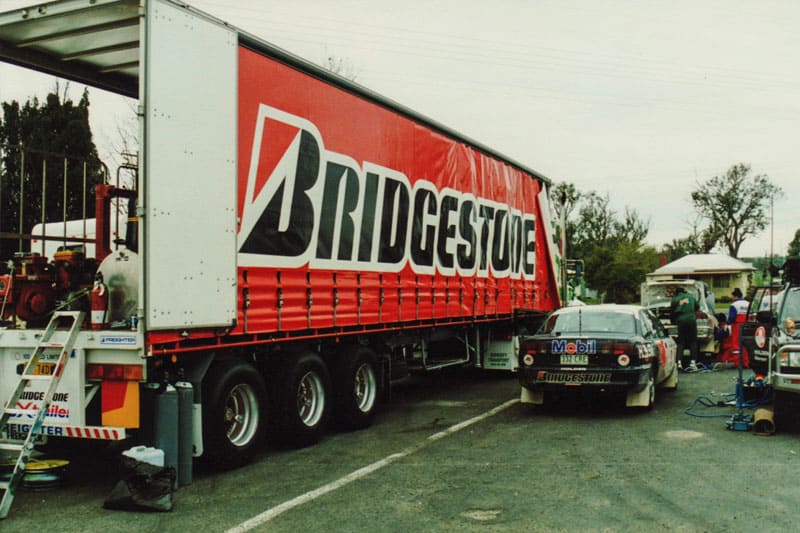 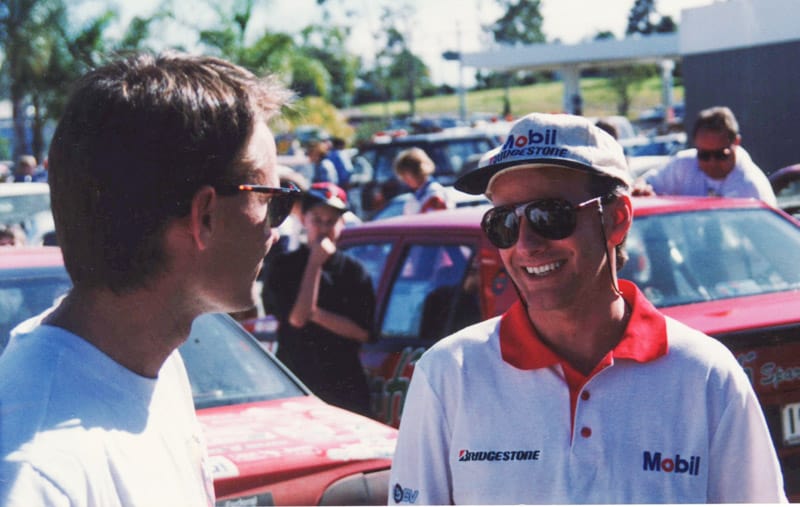 Ordynski and Michael Guest had a ding-dong battle throughout the 1995 Round Australia Trial.