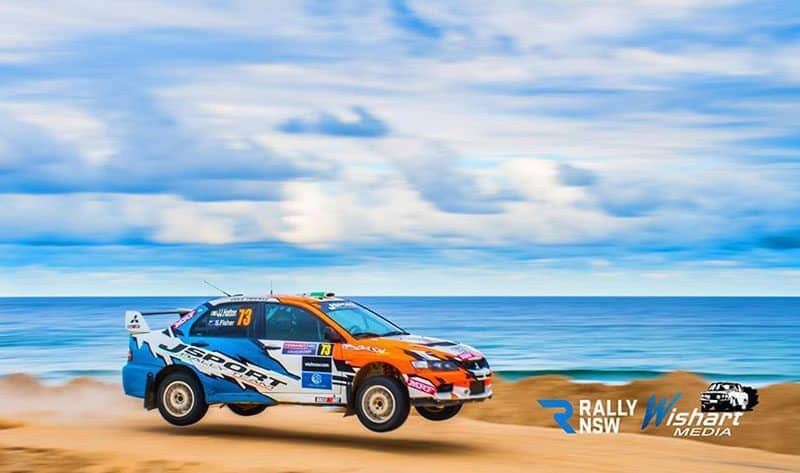 We know him as the Crazy Irishman – JJ Hatton is a real character and has a passion for rallying.

Hatton and his J-Sport Rally Team are looking forward to a new rally season and have registered to compete in the 2018 MTA NSW Rally Championship in his Mitsubishi Lancer Evolution 9.

He will have a new co-driver calling the notes this year, with Nathan Long joining the team. Hatton is optimistic about the season ahead and is looking forward to a successful ‘crack’ at winning the silverware and turning around his bad ‘luck of the Irish’ from previous years.

Hatton is no stranger to the Rally community, having entered previous NSW championship seasons and has also been seen at selected rounds of the Australian Rally Championship and other local club events.

Mixed results in 2016 hampered Hatton’s chance at a championship win. At the 2016 Rally of the Bay, he went in with great expectations, but a broken gear cable and an encounter with a tree and a small bank, would see them sidelined and disappointed.

Earlier in 2016, Hatton saw better results at the VolksMuller Rallysprint held in the Sydney International Dragway precinct at Eastern Creek in Sydney’s west. Some exceptional driving and consistent fast times across the day would see him finish in 3rd outright in dusty conditions on a very dry Sydney weekend.

The J-Sport team started the 2017 season by doing the blind, non pace-note, Caves Classic Rally. But once again, there was no luck for the Irish and after moving up to 4th Outright, Hatton was forced to withdraw.

After such disappointing end to the 2016 running of the Rally of the Bay, Hatton and the J-Sport team were back for the 2017 Rally of the Bay and hoping for a better result.

Consistently clean driving throughout the event and a focussed drive would be rewarded, and by the end of the night stage, Hatton had secured 2nd outright.

After such a strong finish, the next rally would see Hatton step up and enter not only the NSW and Australian Championship rounds, but also take on the worlds best at Rally Australia for the 2017 World Rally Championship event.

Some flamboyant driving would ensure the J-Sport team were a crowd favourite and consistent stage times kept Hatton and his Evo 9 in the top 20. But not everything went his way.

Day 2 would see Hatton and a lot of the field damage their cars on a bridge section and subsequently drop back down the field. Ultimately, on day 3, two punctures and with only one spare in the car, Hatton would withdraw two stages from the end.

The experience of the demanding three-day WRC outing has inspired the J-Sport team to commit to the full 2018 MTA NSW Championship. We expect to see some great competition and Hatton will be one to watch for both his flamboyant driving style and his outright speed and commitment. He will be one to watch for the 2018 Championship and Hatton will be looking for outright victory.

You can see JJ Hatton and the J-Sport team at the first round of the Motor Traders Association of NSW Rally Championship, the Singleton Automotive Centre Caves Classic Rally in Oberon NSW on the 14th of April.

The video below is an overview of the teams last few years and features his now famous Interview from the 2016 Rally of the Bay with Charlie Drake, but don’t worry, we’ve beeped out the worst bits, but still made it PG13+ rated for overuse of the term Bollocks!!