Jari-Matti Latvala took his second victory of the season when he won Rally Argentina, 12 months after claiming his maiden podium for the Volkswagen team there. The Finn, driving a Polo R, headed team-mate Sébastien Ogier by 1min 26.9sec. It was Volkswagen’s ninth consecutive WRC victory, breaking the record held by Citroen. 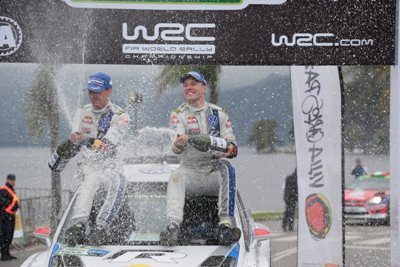 Kris Meeke claimed his second podium of the season in a Citroen DS3. The Frenchman completed the four-day event, round five of the FIA World Rally Championship, 5min 54.7sec behind Latvala in third.

“Last year I finished on the podium but I couldn’t dream to win here, it’s something special,” said Latvala. “I crashed in Portugal and there was a risk my self-confidence was down. If Ogier won, there was a chance the championship could become boring, but now we keep it alive.”

The duo enjoyed a see-saw battle on Friday which ended with Latvala on top. He dominated Saturday’s leg while Ogier had tyre and overheating issues, and started the final day with a 31.0sec advantage.
Kris Meeke - second podium of the year

Conditions today were appalling, with thick fog and deep mud in the classic El Condor and Giulio Cesare stages. Ogier refused to chase Latvala and the gap widened by almost a minute through the four stages covering 76.78km.

Ogier claimed maximum points in the Power Stage and now heads Latvala in the championship standings by 24 points.

Meeke, under pressure after crashing in Mexico and Portugal, never put a foot wrong. He kept a wary eye on the closing Andreas Mikkelsen and headed the Norwegian’s Polo R by 23.6sec.

Mikkelsen endured a scare when his alternator’s warning light flashed on at the end of the final stage. A broken alternator belt forced him to retire on Friday, but this time he made it back to the Villa Carlos Paz finish with no further dramas.
Thierry Neuville - recovered to fifth

Thierry Neuville broke a driveshaft on his Hyundai i20 early in the final stage but came home in fifth ahead of Robert Kubica. After a crash-plagued season, Kubica promised to sacrifice some speed and his tactics paid dividends.

Elfyn Evans was seventh on his Argentine debut ahead of the similar Ford Fiesta RS of Martin Prokop. Three stage wins in the final day propelled Mikko Hirvonen into ninth and WRC 2 winner Nasser Al-Attiyah rounded off the top 10.

The championship returns to Europe for round six when the Mediterranean island of Sardinia hosts Rally Italia Sardegna on 6 - 8 June.