Marysville to host round 3 of Vic title race - RallySport Magazine
×

Marysville to host round 3 of Vic title race

The Marysville Stages hosts round 3 of the CAMS Hino Geelong Victorian Rally Championship (VRC) and the second round of the Victorian Club Rally Series on Saturday, May 4.

Based out of the picturesque township of Marysville, at the foothills of Melbourne’s closest alpine resort, this weekend will be a true test of skill with a return to route chart instructions, challenging the 36 crews entered to read the spectacular roads and varied conditions of the 160 competitive kilometres of stages in the Blue Range Forest.

Their strong start to the year, now sees the teammates heading into the weekend at the top of the championship standings, with Walker/McNamara holding a three-point advantage.

The 4WD charge will be led by Arron Windus and Daniel Brkic who’ll be jumping from a Mitsubishi to a Subaru WRX. The pair are hoping the new car will see their luck change and get their championship challenge back on track, having only scored points in one of four heats contested so far.

Behind them, Warren Lee/David Lethlean (Mitsubishi) will be seeking a repeat of their win at Marysville in 2017, while Ivan register/Paul Humm (Subaru) will want to bounce back after gearbox issues sidelined them at Ada River.

In 2WD, a number of crowd favourites are back in action with Braeden Kendrick/Kate Meyer, Richard McNay/Amy Rooke and Brett Ross/Jason Hague in a trio of Commodores as is Brian Semmens/Dan Parry in their 200SX.

Coming off the back of a win at the Victoria Cross Rally last month, Adrian Stratford also features in the quick little Daihatsu Charade. 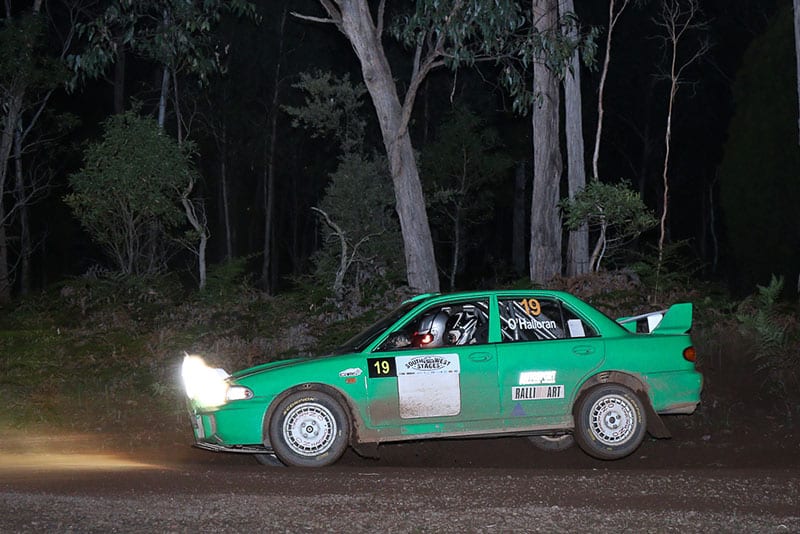 Aiden O’Halloran will be aiming for VCRS success this weekend. Photo: live.love.rally/Craig O’Brien

After the VRC has been run and won and the sun has gone down, 28 Victorian Club Rally Series crews will set out from Gallipoli Park to contest 146 competitive kilometres of stages in the Blue and Black Range Forests.

Cody Richards/Matthew Dillon were sublime in the treacherous conditions at the opening round and with confidence sky high, another win is firmly in their sights.

There’ll be plenty of competition to keep them on their toes though with the 2018 series champion, Aiden Peart back in his Datsun 260Z, and Darryl King (Toyota) and Aiden O’Halloran (Mitsubishi) just a few who’ll be keen to claim top spot.

The day/night split across the VRC and VCRS allows several crews to contest both series. Youngster Mitch Garrad for instance will co-drive with Brad Till in a WRX in the VRC before jumping behind the wheel on his Hyundai for the VCRS where his partner Taylah Murphy will join him to call the notes.

The Marysville Stages also features one further sub-event – the Anglia Memorial. An introductory event with just under 100 competitive kilometres, the event is designed to attract novice crews to give rallying a go, with Steve Allen/Steve Young (Commodore) and Priscilla Lewis/Kylie Turner (Datsun) entered.