Molly Taylor to tackle World Rally Championship – with her Mum 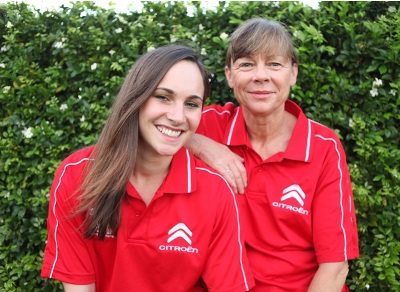 The 25-year-old Sydneysider will contest the year in a Citroën DS3 R3T, the same model she drove to success in last year's European Rally Championship (ERC), to become the Number One-ranked female rally driver in the world after taking victory in the inaugural ERC Ladies Trophy.

Marketing pressures have seen Molly part company with long-time British co-driver Sebastian Marshall. Keeping it in the family, she will be joined in the car by her mother, Australian champion co-driver, Coral Taylor.

“I asked Seb how he would feel wearing a wig and a skirt but he didn't feel it would suit him,” Molly joked.

“However, he understands the commercial reality of what I have to do. He is a first-class co-driver and I will miss having him in the co-driver's seat. I wouldn't be where I am without him, but I'm also mindful that to take the next step in my career, I need to be in a position to attract the commercial partners to make this happen.

“Equally I'm excited to share this next stage of my professional development with my mother, who has had my back since I first stepped into a car. She is arguably the best co-driver in Australia, plus she has had World Rally Championship experience – and no-one knows me better.”

Coral Taylor, who has partnered Toyota’s Neal Bates to four Australian Rally Championship crowns, understands the marketing appeal of an all-female team and she is looking forward to ‘calling the corners’ for her daughter.

“I have admired all the hard work Molly has put into her rally career and I have had the occasional opportunity to compete with her in the past so I know what she is capable of. I'm really looking forward to Portugal.”

D-Max Racing Team Principal Max Beltrami has confirmed that taking part in the WRC with Molly is a great opportunity and a big reward for his young team.

“We want to be ready to fight together with Molly and Coral to achieve the best possible result. We’ve already had a test session with Molly and she immediately found the support of the whole team. I hope she will feel at home with us during this season.”

“I'm really looking forward to getting back in the car,” Molly says.

“It has been a very busy four months to get us to this position and I'm really grateful to Michèle Mouton and Fabrizia Pons from the FIA Women In Motorsport Commission and my advisor, Piercarlo Capolongo, who have been instrumental in getting my 2014 program together.”

Molly moved to Europe in 2009 to build her rally career after winning several class championships in Australia. In 2011, she was one of six young drivers to win a scholarship in an international shootout between 18 drivers from around the world.

That gave her a fully funded drive in the WRC Academy, a junior section of the World Rally Championship. For the last two years, she and Marshall have contested selected rounds of the European Rally Championship and the WRC, posting several class victories along the way and last year’s ERC Ladies Trophy.