As usual, last weekend’s Monte Carlo Rally proved to be the most exciting, action-packed round of the World Rally Championship – and there’s still 12 events to come.

The rest of the event may have been a bit like groundhog day, with Volkswagen finishing first, second and third, but the rule changes and the weather made for one of the best rallies in recent memory.

World Champion, Sebastien Ogier, once again showed his class to take this third Monte Carlo Rally win.With split timing no longer allowed in the WRC, drivers were left on their own for the first time in many seasons. Matching your pace to the opposition, via split times provided by team management, is no longer allowed, and drivers had to push hard and hope that it was fast enough.

Add in to the mix the return (for this event) of Sebastien Loeb in a factory Citroen, and Monte’s ever-changing weather conditions, and the event had the recipe to be an instant classic. Without a doubt, it lived up to expectations.

On the first stage, World Champion, Sebastien Ogier, running first on the road, was an incredible 30.9 seconds slower than Loeb – a driver who hadn’t done a WRC event for 15 months, and who is now a touring car driver.

It proved that Loeb is a true legend of the sport, but also how critical road position and tyre choice are in Monte Carlo.

It also saw drivers such as the young Estonian, Ott Tanak, setting top three times, and enabled the former Formula 1 star, Robert Kubica, to show his incredible speed on tarmac.

While he had his expected off-road excursions in his privately-entered Ford, Kubica’s time on the 51.70km ‘Faye’ stage was simply incredible.

Running first on the road, and as one of the only drivers using Pirelli tyres, Kubica was an astonishing 33.4 seconds faster than the next best, Kris Meeke in a Citroen, and a jaw-dropping 1m49.5s faster than Ogier!

Whether it was down to road position or tyre choice is really irrelevant. The fact that the Polish driver put in such a time left the WRC experts dumbfounded. 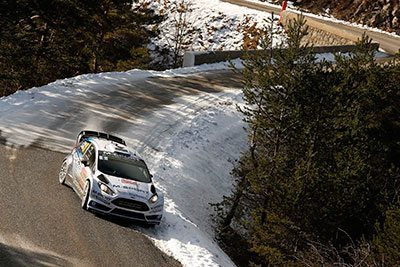 Tyre choice was critical on the Monte Carlo Rally.But like in most events, the cream usually rises to the top, and by rally’s end, Ogier had risen to the top of the pile with a 58 second victory over team-mates Jari-Matti Latvala and Andreas Mikkelsen.

Loeb, meanwhile, ripped the rear suspension off his Citroen on day two and eventually finished eighth.

Regardless of the final result, it proved that this year’s championship is going to be a competitive one. Ogier may be an odds-on favourite to win the title again, but drivers such as Meeke, Neuville, Tanak and Latvala will ensure that the Frenchman doesn’t have it his own way.

The WRC travels to the snowy stages of Sweden next, where Kiwi Hayden Paddon joins the Hyundai squad for the first of his 12 events this year. It promises to be another hard-fought battle.