Wins for both Gustavo Saba and Luciano Preto in San Juan!  This national Argentinohampionship rally also counted as the round of the FIA Codasur championship.

Gustavo Saba on his way to victory in Argentina.The Fabia R5 of Paraguayan Saba outpaced the local Maxi Rally drivers, with Preto finishing over two minutes behind.

In the Argentino category, different makes of Maxi Rally finished in the top six places.   Saba’s teammate Marcos Ligato had engine problems on his Fabia, while Geronimo Padilla lost his Argentino lead with a 2m30s time control penalty due to a radiator problem.

It was a Fabia R5 festival at the Hungarian championship Veszprem Rally, with these cars taking the top four places and six in the top 10. 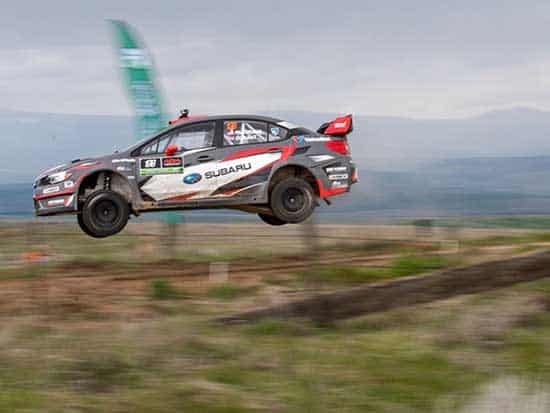 Over the years the event has attracted considerable interest. In 1956 the racing driver Carroll Shelby won the event in an Indianapolis specification 4.5-litre Ferrari 375 Grand Prix car in a time of 10:21.8 sec.

This year Higgins hit a rock which tore off his left rear wheel.  This caused his car to pirouette and plummet 50 feet off the side of the road.

The Kenyan national championship Nanyuki Rally scheduled for this weekend has been cancelled at short notice, on account of an increasing risk of local land invasion and terrorism activities because of impending political elections.