Thierry Neuville snatched a shock lead at Corsica Linea - Tour de Corse on Saturday night after a dramatic finale to the longest day of the WRC season.

The Belgian heads into Sunday’s closing leg with a 4.5sec advantage after charging ahead of leader Elfyn Evans in the marathon 47km Castagniccia speed test which ended the day.

Evans started the test with an 11.5sec advantage in his Ford Fiesta after his frantic tussle for the lead with Ott Tänak ended in the previous special stage. The Toyota Yaris driver conceded two minutes after stopping to change a punctured tyre.

Evans’ advantage appeared healthy, but an increasingly confident Neuville outgunned him by 16.0sec in his Hyundai i20 to set up a thrilling final day shootout.

“This morning we couldn’t find a good feeling to push as hard as we wanted. This afternoon we raised the height of the car and I was able to attack in every stage,”explained Neuville. 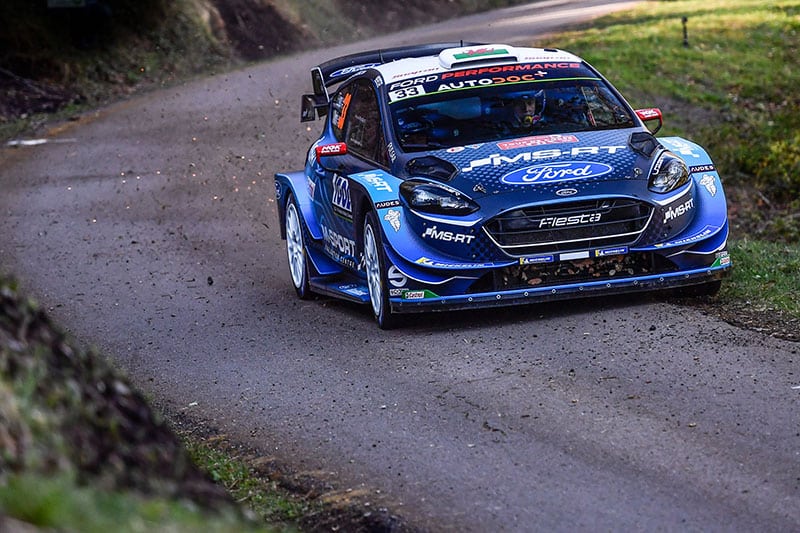 Elfyn Evans in action in his Fiesta.

“I knew I had to keep the car on the road, but when the feeling is good you drive as fast as you can without taking big risks.”

Evans was shell-shocked. “The afternoon started well but went downhill. It was a surprise to lose so much in the last stage. Three or four seconds maybe, but 16sec is a mountain. It was a shock but the best thing to do is forget about it and concentrate on tomorrow,” he said.

The Welshman, who led after yesterday’s opening leg, was demoted by Tänak in this morning’s final test but the margin between them was only 1.6sec when disaster struck the Estonian.

Sébastien Ogier was 40.8sec adrift of Evans in third after a persistent drive. A raft of overnight changes improved his Citroën C3’s handling. He still lacked pace but climbed from sixth this morning to overhaul Dani Sordo in Castagniccia for a podium place.

Sordo ended 5.1sec adrift but with a comfortable 42.2sec lead over Teemu Suninen in fifth. The Finn was plagued by several small issues in his Fiesta this morning but closed the day with a 22.4sec margin over a disappointed Tänak.

Esapekka Lappi cut a frustrated figure throughout the day in his C3 as he searched for speed. He was seventh, ahead of Sébastien Loeb who struggled with understeer and lost more time after sliding his i20 into a ditch.

Sunday’s leg transfers to the west coast near Calvi and is the shortest of the rally. Drivers face just two stages covering 51.19km, culminating with the Wolf Power Stage in which bonus points will be awarded to the fastest five drivers.