The international-spec machine is the first Gp N car of its generation in Europe to be built in a sedan configuration and was launched at the Autosport International Show in Birmingham, England today. JRM also announced that former FIA Production Car World Rally Champion Niall McShea will be its Gp N test and development driver.

JRM was established in 2008 and has a successful background in rallying. Its cars have won international events on gravel, asphalt and snow, as well as a British Rally Championship title.

The unveiling of JRM’s new Gp N Subaru WRX STI is the first milestone in the company’s new association with STI – the motorsport division of Subaru. JRM has teamed up with STI to help the Japanese marque to re-establish a front line presence in the Gp N category.

“We’re extremely proud to have reached an official agreement to produce Gp N rally cars in association with STI,” James Rumsey, JRM executive director, said. “The WRX STI is a formidable performance car and we have found there is a real hunger in markets around the world for a latest-specification Gp N Subaru that is strong, reliable and cost effective.”

JRM’s new Gp N challenger is unique and different to other WRX STIs of the same generation because it is the first in Europe to be built in a sedan configuration. JRM has chosen this specification because the sedan offers improved aerodynamics, traction and balance over the alternative hatchback WRX STI.

Since STI ended its World Rally Car programme in 2008, STI has been supporting Gp N activities across the world. JRM will help STI to continue these activities by building Subaru vehicles that are modified for the Gp N rally category and by providing an STI special parts sales service.

The JRM Gp N Subaru programme will be run from the company’s state-of-the-art headquarters in Daventry, Northamptonshire, England.

The engineering team that has been established and will spearhead the development of the WRX STI brings a wealth of experience with the Subaru marque. Many of the team have successfully engineered WRX STIs to previous FIA World Rally Championship titles. 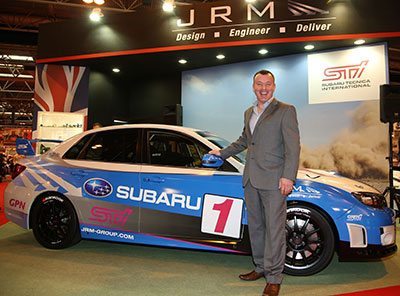 Niall McShea, who won the 2004 FIA Production Car World Rally Championship title in a Gp N Subaru WRX STI, is delighted to link up with JRM and the STI brand again.

The 39-year-old said: “I’ve got many happy memories of Gp N rallying with Subaru and I’m thrilled to be asked to join this exciting programme. I think the Gp N category has lots to offer at international and domestic levels and both JRM and STI have developed a fantastic package.”