Ten years ago, at the 40th anniversary of Rally New Zealand, Ford driver Jari-Matti Latvala won one of the most amazing rallies when he snatched the lead just before the finish of the final stage, after rival Citroen drivers had led all but two stages. One of the most amazing rallies is recent times, Latvala drove an usually measured event, the only time he scored a fastest time being at the pre‑event Shakedown. After two days of gloom for the Ford teams, as Citroen seemed to be heading for another major success, in the final section of the rally, the famous Whaanga Coast stage once again upturned the event and produced an unexpected change of fortunes. The FIA had recently announced that the New Zealand Rally had been dropped from the 2011 World Rally Championship calendar and this cast gloom over the fifth round of the 2010 series. The event had last been run in the Northland area (or indeed was last based in Auckland) in 2005. 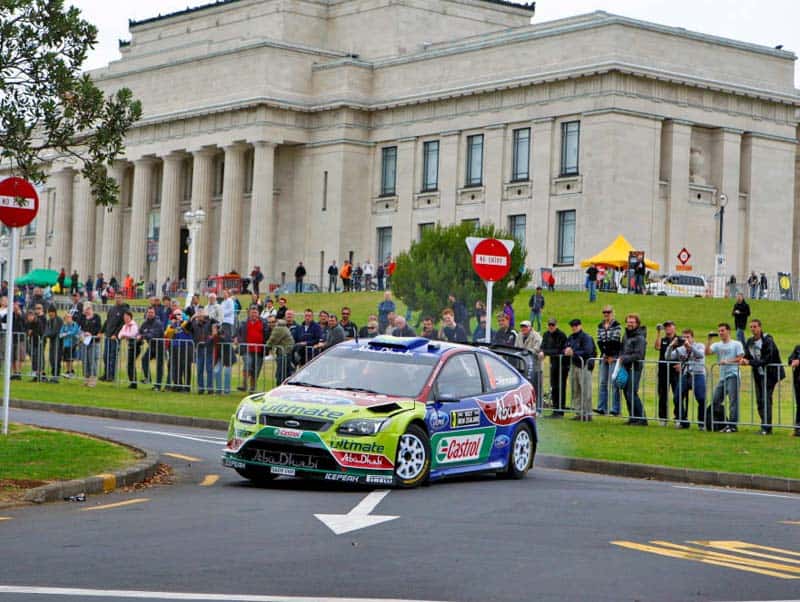 Mikko Hirvonen on the opening stage in the Auckland Domain. Photo: Geoff Ridder

The organisers celebrated their 40th anniversary of the first running of their event seriously (the first event, then called the Shell Silver Fern Rally, was run in 1969, but due to no event being held in 1974 or 2009, hence this was the 40th anniversary). Rally New Zealand at the time held the record for the tightest special stage battle for victory: 0.3 seconds in favour of Marcus Gronholm over Sebastian Loeb in 2007. It held the record for the the longest special stage distance on any WRC event (Fulvio Bacchelli’s winning time in 1977 was over 24 hours!), and the country which gave Subaru its first world championship win in 1993. After a year’s absence on account of the FIA’s event rotation process, Rally New Zealand was back again in the WRC, but the wish of the spectre of the then Global Promoter, North One Sport, to drop the event from the WRC hung unhappily over the occasion.

Sebastien Loeb had two incidents that could easily have ended his rally. Photo: Geoff Ridder

This highly charged situation simply meant the organisers were more determined than ever to do well and the event was more dramatic than ever. It was the longest WRC event in terms of stage distance for six years (396.50km), and for the first time in five years the rally was based in Auckland, enabling stages to be run both north and south of the country’s commercial capital. Once again the famous gravel covered stages and the often heavily cambered roads created a special challenge, made even more demanding because teams were banned from testing here. Any pre-event anxiety about whether the recent long dry spell of weather would hold out were dispelled as conditions remained dry, but curiously the circumstances did not create the anticipated running order crises of recent events. Also, the decision to introduce mixed surfaced stages, like in Turkey, had been met with a mixed response. The country already possessed unlimited quantities of classic gravel stages. It had been a long time since there was such a captivating event and so it turned out. Five different drivers led and the lead changed hands eight times, but Ford won the event notwithstanding the domination by the Citroen drivers, who won 20 stages against one for Ford! Mikko Hirvonen had a lacklustre rally but made Ford’s one fastest time, on the final day. 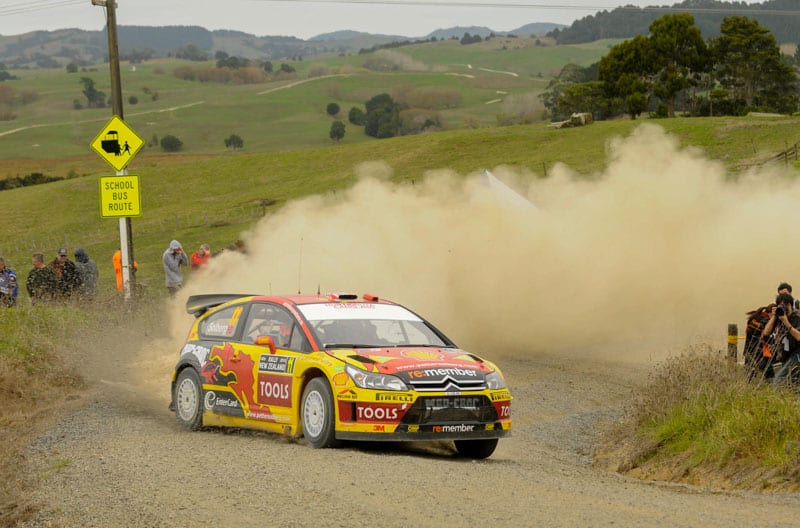 Petter Solberg was the leader after the opening day and then played road sweeper. Photo: Geoff Ridder

In the unexpectedly dry conditions Citroen’s drivers always seemed to be in the ideal running order positions at the right time. The only noticeable efforts at controversial tactics were played out at the end of Day 1. Several drivers very carefully easing their pace at that point, which meant that in the space of three stages Sebastien Ogier (Citroen Junior Team) and Latvala and Petter Solberg (in his own privately-run team) took turns at leading the rally. When the game of musical chairs came to an end, non championship driver Solberg held the lead and had to run first on the road on Day 2. The other drivers dutifully saying how fast Solberg was driving, a pace they could not hope to match ... 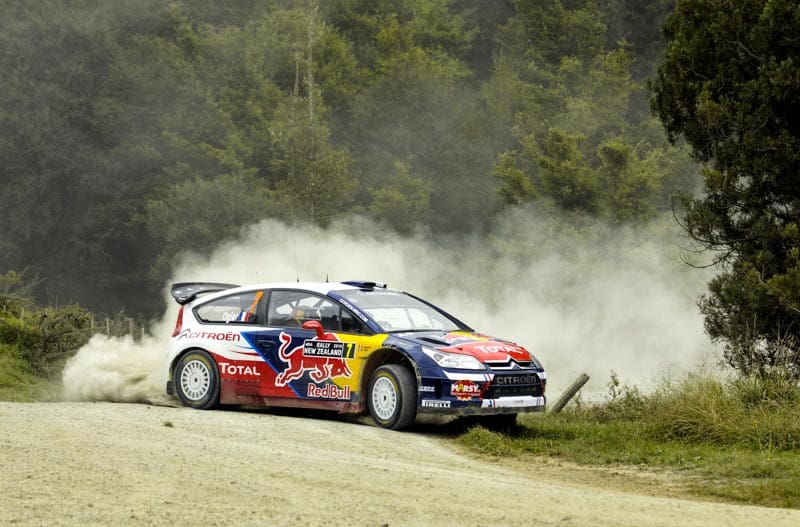 As the rally progressed, the number of potential winners did not diminish. With just two stages to go it was obvious that all of them had hopes they could win, and finally it all came to a climax. Ogier went off the road and finished second, Loeb went off the road and finished third, Hirvonen could not maintain his speed, and Solberg crashed into a telegraph post and retired, all of which left Latvala spraying the champagne. For Latvala the emotions of that final stage will long be remembered. This was the place where in 2008 he had been leading and then it all fell apart when he went off the road. Running third on the road behind Ogier and Loeb on the final day, Jari-Matti had a grandstand view of the dramas unfold ahead of him. The first sign of trouble was a branch from a tree lying in the road. Latvala knew that must have been the work of one of the Citroens running in front (it was Loeb). Then, very close to the end of the final stage, there was a detached bumper of a Citroen (that was Ogier’s). 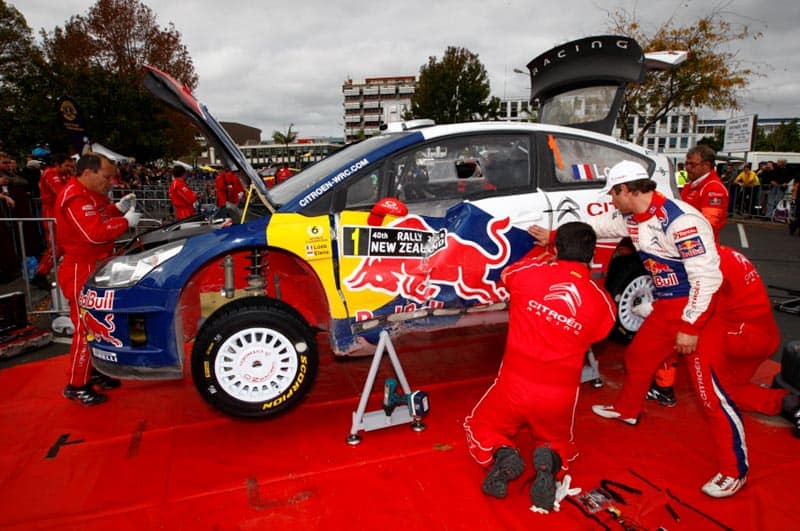 The only time that Latvala seriously reckoned he would win was just three bends from the finish of the final stage. Only two special stage world championship rallies had been won by a narrower margin than Latvala’s 2.4 seconds over Ogier, who was unregistered for this event, but had led after over half the stages. For Ford this was a great occasion, the event where they exceeded the total number of WRC wins achieved by Lancia, and the chance to score another domination in the Super 2000 category. This rally witnessed Citroen catching irritating glimpses of the fallibility of their otherwise brilliant star driver, Sebastien Loeb, who eventually went on to win eight rounds of the 2010 series. Notwithstanding producing dazzlingly fast stage times, Loeb made two major mistakes and was lucky to finish third overall. Through all these dramas the sport’s other legendary hare, Latvala, turned tortoise on this occasion, gained one of the best successes in his career and his third WRC win, and his first outside Europe. 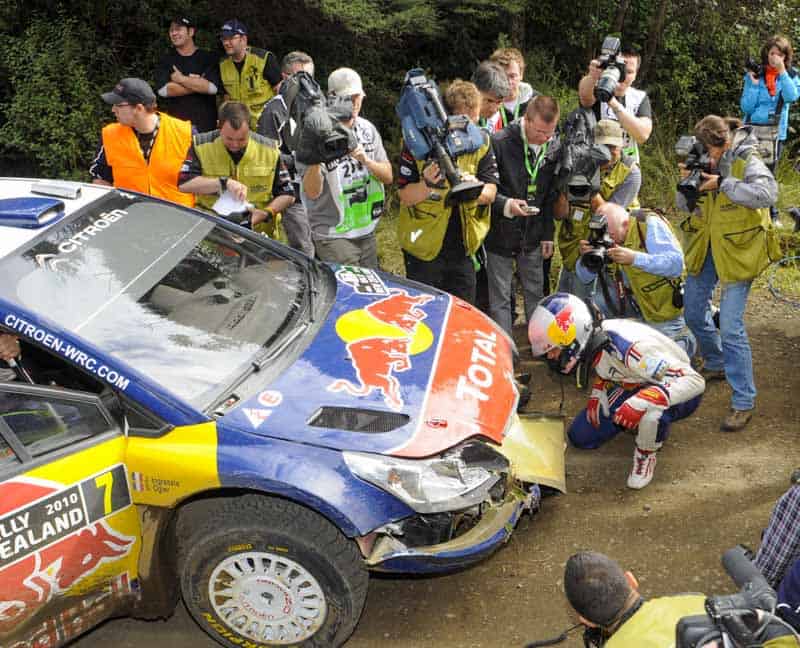 Ogier examines the damage on his C4 on the final day. Photo: Geoff Ridder 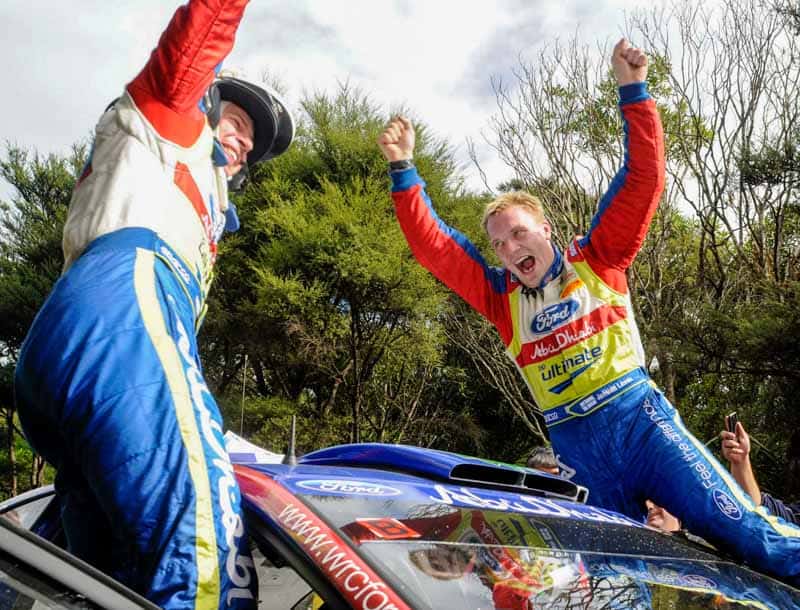 Jansen all set for home rally in Nelson

Australasian Safari gets underway in WA