Canberra Subaru driver Michael Harding has made the perfect start to the 2014 Gary's Motor Sport Tyres NSW Rally Championship, carrying his day one dominance of round one at the National Capital Rally through a near flawless day two, to capture victory and maximum championship points.

Harding and co-driver Julie Boorman were fastest on five of the day's seven special stages to finish the rally 4mins 51 sacs ahead of fellow Canberra Subaru driver Doug Wright while Cooma's Andrew Penny completed a Subaru podium in third place a further 2 min 34.8 sacs behind.

However despite his near perfect day Harding had some harrowing moments near the end of the rally when the gearbox stuck between gears. 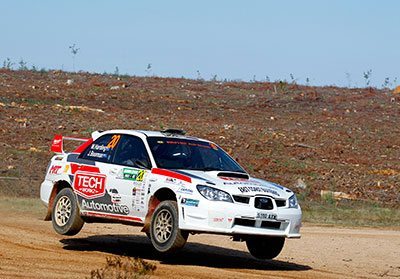 Canberra Subaru driver Michael Harding has made the perfect start to the 2014 Gary's Motor Sport Tyres NSW Rally Championship.The gearbox became stuck at a hairpin and we were in angel gear, we stopped for a few moments and thought it was all over but Tony Sullens came along and asked if we wanted a push, four or five guys pushed us and once we got going we grabbed a gear and we were back into it," said Michael Harding.

"Its been a crazy weekend we've had some awesome stage times, we've had a few odd problems, lots of punctures, the gearbox playing up, but we kept on going and we are here, its been fantastic," he added.

After a day of slippery roads and incessant rain on Saturday the crews enjoyed brilliant sunshine and near perfect conditions with most of the stages run in the Kowen Forest to the east of Canberra allowing the NSW Championship competitors to cut loose and enjoy the ride.

Another Canberra local came to the fore in winning the two wheel drive category, with veteran Trevor Stilling bringing his Datsun Stanza home in fourth outright amongst the NSW field, as well as taking third in the Australian Classic Challenge with new co-driver Nigel Walters alongside him. The pair beat Canberra doctor Meng Chung in a Honda Integra for the two wheel drive honours.

In all, 19 of the 23 starters were declared finishers, with five cars re-joining the rally after problems at various points. Two cars were non-finishers on the final day with Scott Jackson's Nissan Silvia forced out with gearbox problem and Tristan Kent's Mitsubishi Evo also retiring.

Rally NSW chairman Col Fletcher said the result of the first Gary's Motorsport Tyres NSW Rally Championship round was a great vote of confidence in the re-formulated series and reforms that have been put in place for 2014 and the years ahead.

"This has been vindication of the changes that have been made and the simplification factor that has been applied," said Col Fletcher. 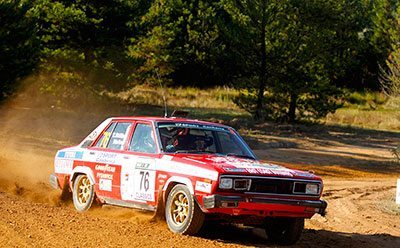 Canberra veteran Trevor Stilling took his Datysun Stanza to a win in the two wheel drive category as well as taking fourth outright in the NSW field and third in the Australian Classic Challenge with new co-driver Nigel Walters alongside him."The NSW Championship field made up the largest contingent of competitors in the National Capital Rally and this is only going to get stronger with more drivers declaring their interest in being a part of the series," he added.

The Gary's Motorsport Tyres NSW Rally Championship now moves down the hill from Canberra to the South Coast seaside town of Batemans Bay for round two, the Rally of the Bay, on the June Long Weekend, 7th-8th June, with a new two-day format and some of the best rally roads in Australia.

Prior to the Rally of the Bay the new Techworkz Development Rally Series will kick off in the south coast forests around Termeil on 7th April for the VSport Stages.