Rally officials, the FIA and WRC Promoter reached a decision to halt the event after SS21. Enough stage distance had been covered to ensure that the third round of the FIA World Rally Championship was eligible for full championship points – with the exception of points for the cancelled Power Stage – and it gave team personnel and members of the international media additional time to return to their countries before any further restrictions were put in place on air travel because of the COVID-19 pandemic.

Ogier guided his Toyota Yaris WRC to four stage wins on his way to a 27.8-second victory over defending World Champion Ott Tänak. The success was the Frenchman’s 48th WRC career win, a feat surpassed only by Loeb’s remarkable 79 successes.

It also moved Ogier and co-driver Julien Ingrassia to the top of the World Championship standings and enabled Toyota to increase its lead in the Manufacturers’ Championship. It was the factory Toyota team’s first success on the event and marked the fourth manufacturer with whom the Frenchman has won the rally.

Ogier said: “A victory is a victory of course. This one feels completely different. It has been mixed feelings. The priority is to go home now and look after my family. The team have done a fantastic job – a first victory together. Let’s work to get the next one as quickly as possible and celebrate that one.”

Finland’s Teemu Suninen fought gallantly to fend off a fierce afternoon challenge from Tänak in his defence of second place, but the young Finn came up just short as the Estonian moved up to fifth in the Drivers’ Championship behind Ogier, Evans, Neuville and Rovanperä. Tänak won six of the 20 special stages after fighting back from an accident that damaged the rear of the car on Friday morning.

Elfyn Evans came into the weekend as the series leader but it was never going to be easy for the Welshman to finish on the podium from his first day starting position. Fourth overall enabled the Toyota driver to stay on the coattails of his team-mate in the title race. Young Kalle Rovanperä finished fifth in the third of the Yaris WRCs.

Sixth-placed Pontus Tidemand wrapped up his third victory in the FIA WRC2 category in México with a dominant performance in a Toksport Škoda Fabia Evo. The Swede erred on the side of caution over the final day and eased to victory over Mexican debutant Nicolay Gryazin by 1min 57.7sec, the gap exacerbated by a late drive shaft issue for the Russian. 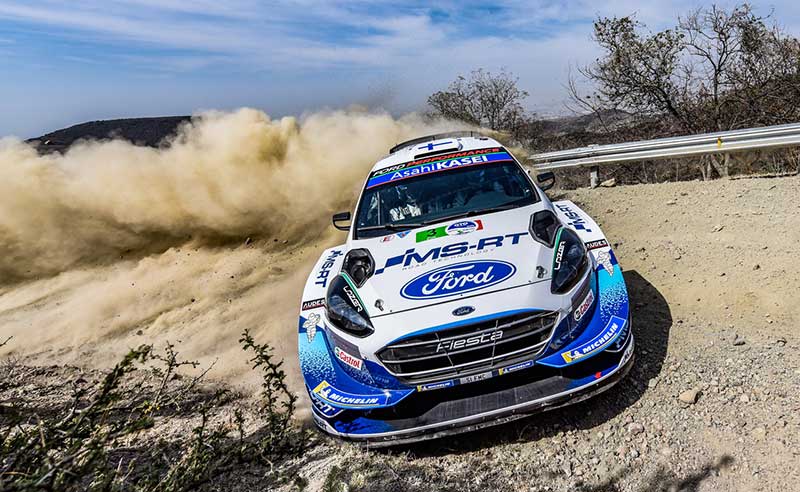 Gryazin’s Hyundai team-mate Ole-Christian Veiby ran off a string of stage wins over the final leg, but brake issues had cost the Norwegian too much time on Friday. He finished in 10th place.

Gus Greensmith reached the finish in ninth. He lost out on a top six finish in the second of the Ford Fiesta WRCs after a time-consuming battery issue on the second stage of the day and recovered strongly to gain an extra pace on the closing super specials.

Young Bolivian driver Marco Bulacia had missed out on a WRC2 category win on the event in 2019, but the talented Škoda Fabia driver dominated the newly-named FIA WRC3 section, finished eighth overall and 4min 11.1sec in front of the Citroën C3 of Chilean runner-up Emilio Fernández. Ricardo Triviño was the leading Mexican driver in 12th overall and third in WRC3 after an impressive drive.

Belgian driver Thierry Neuville was the joint leader of the World Championship before the event and bounced back strongly on the final day to record a total of eight fastest times on his way to vital Manufacturers’ points.

Saturday – as it happened

Thierry Neuville was given the unenviable task of running first on the road after his retirement with battery issues on Friday. The 24.91km of the Guanajuatito stage was the first of three gravel tests in the morning loop after an overnight thunderstorm and the threat of potential storms during the afternoon.

Tänak was a man on a mission and the Estonian beat Evans by 1.4 seconds to regain third place but the Welshman increased his lead over Rovanperä to 9.8 seconds. Ogier was in superb form and the Frenchman managed to beat Suninen by 9.7 and the outright lead grew to 22.9 seconds. A rejuvenated Veiby was the quickest of the three WRC2 runners, as his Hyundai team-mate Gryazin trimmed a cautious Tidemand’s lead to 48.6 seconds.

The high-speed gravel of the Alfaro stage was next up. Neuville failed to arrive for his due start time and Greensmith was handed the task of running first on the road. A stall shortly after the start didn’t help the Briton’s cause though and the crew were forced to push the stricken Ford Fiesta off the stage and on to an access track.

Neuville eventually began the special 11 minutes late and incurred a 1min 50sec time penalty. Greensmith was able to start the Ford after replacing a throttle component but slipped behind the leading WRC2 and WRC3 drivers after dropping 10 minutes.

Evans was now running second of the road but still edged 21.9 seconds clear of Rovanperä and maintained fourth place although Tänak benefited from Evans’s less favourable starting position to tighten his grip on third place. Tidemand beat Gryazin in WRC2 and his lead increased to 51.1 seconds.

The third of the morning’s stages was the 21.78km of Derramadero, which featured sections of Sunday’s final stage. Neuville slid wide under braking and overshot a left-hander, but the Belgian only lost a few seconds. Stage winner Tänak increased his advantage over Evans to 9.4 seconds and closed to within 6.6 seconds of second-placed Suninen. The Estonian also closed to within 34.9 seconds of leader Ogier.

Veiby won his third successive WRC2 stage, but Tidemand maintained a lead of 56.9 seconds over Grzyazin. Bulacia continued to hold a sizeable lead over Fernández in WRC3.

On the re-run of Guanajuatito, Tänak was expected to close in on Suninen’s second place, but the Finn hadn’t read the script properly and the duo were closely matched on the punishing gravel trail. The Estonian eventually pinched six-tenths of a second off Suninen and that was only after the Ford driver had survived a gentle spin. They were separated by six seconds heading to Alfaro. Ogier finished the stage safely in second behind Neuville to lead by 30.3 seconds.

Both Tidemand and Gryazin suffered tyre issues in the WRC2 battle but the fortunate Swede was able to extend his lead to 1min 30.4sec. Veiby looked set for another stage win until he spun at the flying finish and lost vital time.

Tänak continued to pressurise Suninen through Alfaro and he reduced the Finn’s advantage to 3.1 seconds with the fastest time, as Ogier erred on the side of caution to conserve his overall lead and the leaders held station in WRC2 and WRC3.

Derramadero 2 was the last of the gravel stages and Tänak’s big chance to move into second place. Despite lacking confidence with his car, the Estonian managed to beat Suninen by 9.4 seconds to snatch second after the Finn complained of a lack of grip with his hard tyres and finished the stage with three brakes.

Ogier safely negotiated the stage to take a lead of 27.4 seconds into the remaining super specials and Tidemand and Bulacia stayed out in front in the minor categories with the former extending his lead when Gryazin lost 33 seconds with a drive shaft issue.

Tänak strengthened his grip on second with the second quickest tine behind Neuville in both SS19 and SS20 and there were no further dramas on the final 1.62km Rock and Roll super special stage in León with Neuville setting the fastest time and Ogier securing his sixth win by the margin of 27.8 seconds.

2020 FIA World Rally Championship for Manufacturers’ Standings
After round 3

2020 FIA World Rally Championship for Drivers’ Standings
After round 3