Sébastien Ogier won his third Rallye Monte-Carlo on Sunday after a masterful display of speed and caution over slippery mountain roads in the French Alps.

Sebastien Ogier took his third Monte Carlo Rally win.The double world champion saw off an initial challenge from rally legend Sébastien Loeb, seven times a winner of this opening round of the FIA World Rally Championship, before skilfully managing his pace in snow and ice to win the four-day event by 58.0sec.

The Frenchman traded times with fellow countryman Loeb over the first seven special stages until the Citroen driver hit a rock and broke his DS 3’s rear suspension.

Ogier inherited a 1min 46sec lead. Despite being unable to monitor his rivals’ split times during the stages under new rules, he blended a controlled pace with safe tyre choices through the final two days to seal the win.

“Winning Monte-Carlo means a lot for every driver, but especially for me,” he said. “It’s the most important rally of the season. The weather makes it a huge challenge but the satisfaction is great when you make it.

“This event had the best atmosphere I have experienced on a rally,” added Ogier, who grew up near the host town of Gap. “When I drove the stage close to my home village the atmosphere was magical.”
Latvala kicked-off his season with second in Monte-Carlo 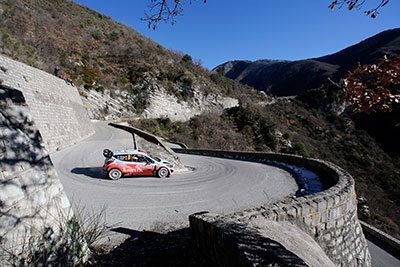 Hyundai finished fifth and sixth with their i20 WRCs.Tyre selection proved as tricky as ever in the frequently changing conditions, but Latvala never put a foot wrong and was delighted to finish runner-up after admitting before the start he would be satisfied with a top five finish.

After a cautious opening, Mikkelsen surged into third and finished 31.3sec ahead of Mads Ostberg’s DS 3, the Norwegian rueing engine issues that twice forced him to stop mid-stage to reset the power unit.

Thierry Neuville edged past Hyundai team-mate Dani Sordo in the final stage to claim fifth by 0.8sec. Elfyn Evans fought back from broken suspension on his Ford Fiesta RS yesterday to take seventh, ahead of the recovering Loeb, who won the most stages, Martin Prokop and Kris Meeke.

Robert Kubica showed blistering pace to win four stages. However, an opening night retirement when he stopped with electrical issues after hitting a tree was followed by a second retirement today when he crashed at the finish of the penultimate test after brake problems.

The second round takes contenders to the snowy forests of Rally Sweden (12 - 15 February) for the only true winter event in the calendar. 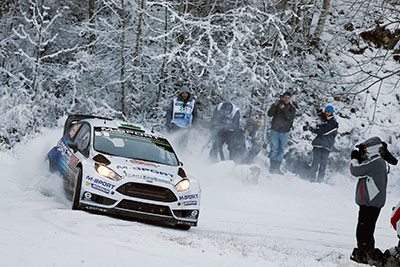