The year is 2010, and road order tactics are about to come to a head at Rally Jordan, paving the way for constant changes and debate in the years to come.

Road position dilemmas on gravel rallies have always been present, but in the mid to late 2000s, they were coming to the fore as tactics and strategy for tenths of seconds became more pertinent than ever.

Gaps closed and the fights were ever more fierce, and despite sparing use, there had to be a tipping point for change.

Many believe the tipping point was Rally Jordan 2010, where factory teams used tactics on all three days to alter road order for their own benefit.

First of all, let’s set the scene.

The championship year 2010 was closely fought by the two remaining manufacturers post the Global Financial Crisis, Ford and Citroen, and after two rounds of the World Rally Championship, it was the six-time champion, Sebastien Loeb, who had a solid lead in the drivers’ title race.

The rally, based some 30 minutes from the country’s capital, Amman, consistently presented crews with treacherous road conditions which made being first on the road a nightmare.

Only one previous WRC rally had been held in Jordan, with Mikko Hirvonen winning by over a minute. Sebastien Ogier won the JWRC section.

Well over 300 competitive kilometres across 21 stages in 2010 would mean this Easter weekend would be a hotly fought contest in Biblical lands.

As per the rules of the time, consistent with that of today, the championship leader, Loeb, led the crews into the seven stages of day one. 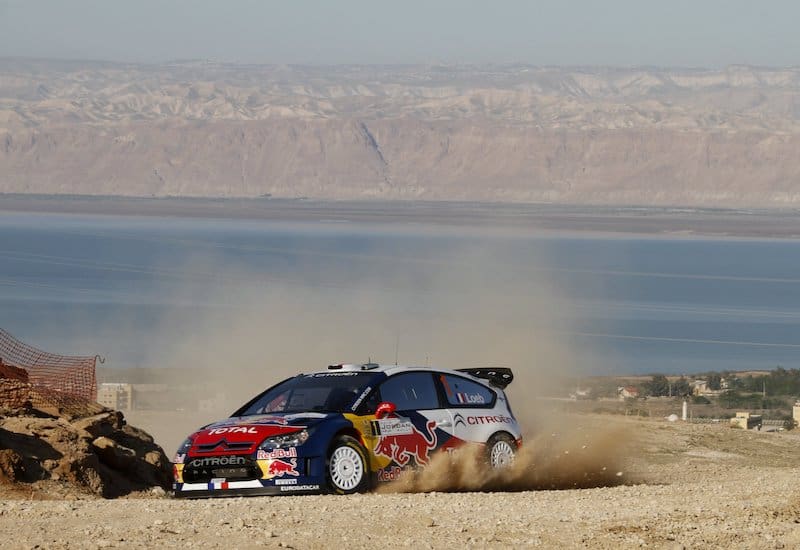 Jari Matti Latvala opened up an early lead as Loeb struggled with opening the road in his C4.

Norwegian Petter Solberg and Spaniard Dani Sordo were also quick, aided by their fifth and seventh starting positions respectively. No surprise given the swept gravel road lying in front of them.

The games started late in the afternoon, when the then 24-year-old Finn, Latvala, turned up the wick, putting his foot to the floor while others slowed.

Latvala had charged forward and ended day one with a 30-second advantage.

His nearest challengers, Solberg and Sordo, slowed to lose well over 25 seconds, seeing them plummet down the leaderboard and road order for day two.

Latvala explained he was happy with the day, despite not being in the best road position for the Friday (day two) stages.

“We had a very good start to the rally, a clean run and no mistakes, so we’re pleased with the day,” Latvala explained at the time.

He wouldn't be happy for long. His 30-second advantage was strong, but did not guarantee any champagne.

Day two’s six stages were treacherous, including the mammoth Jordan River test at over 41 kilometres.

Behind the road leading Latvala, his counterpart, Hirvonen, was the high-profile victim to fall by the wayside.

He cut a corner too tightly over a crest, which tore a wheel off his Focus. He would go no further until the final day’s antics.

By the conclusion of the penultimate stage of heat two, Loeb, with thanks to his better road position, had moved ahead of Latvala, while tactics from Solberg and Sordo had not paid off from day one. They were fourth and fifth.

Issues for Citroen arose when Ogier’s third fastest stage time on the second Jordan River test moved him ahead of Latvala. 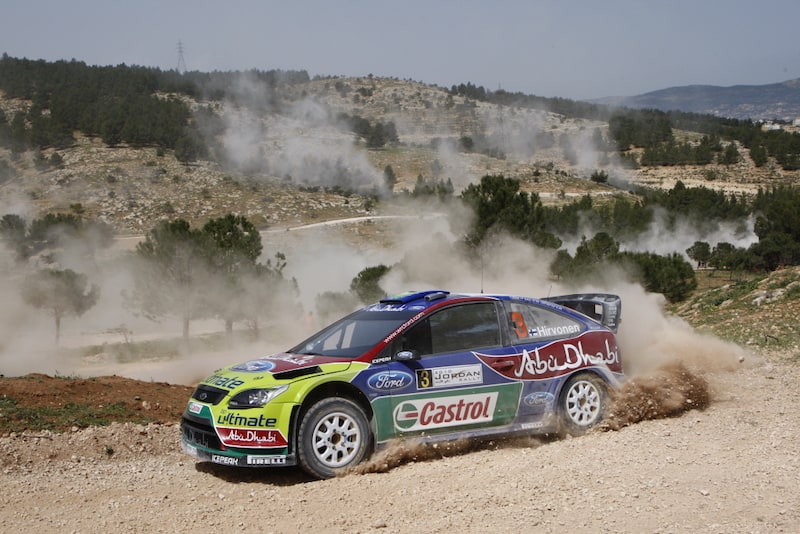 Mikko Hirvonen crashed out of Rally Jordan on the second day.

A positive move for Ogier, but it ensured Latvala would have a greater road position to attack those ahead of him. Loeb and Ogier would essentially be sweeping the road clear for their rival behind.

Heading into the final day, the leaderboard looked like this:

“We asked Sébastien Ogier to check in early to sweep the road,” explained Oliver Quesnel, the Citroen Racing team principal.

“We had a technical problem with his car in the service park, which dashed his hopes of a podium. We reckoned that this strategy would give Sebastien Loeb a better chance of defending his first place.”

A complicated game of chess ensued. 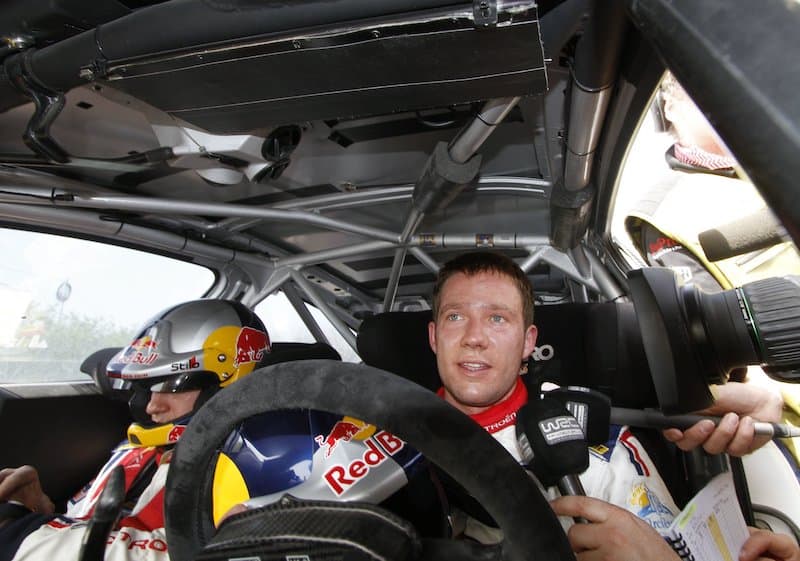 Latvala should have had a much cleaner line than Loeb, giving him a greater chance to attack for the lead, however, Citroen's team orders meant the advantage was diminished.

Ford 'smelt something fishy in the Dead Sea air' and were understandably less than impressed with Citroen tactics.

In response, they checked the returning Mikko Hirvonen out of service early, moving him ahead of the Latvala.

The road order shuffle was not impressive, nor was it clean.

Ogier brushed away questions before the leg’s opening stage, obviously not impressed by the team orders game he was quickly becoming a part of.

He was thrust into being first on the road, being sacrificed for the sake of his more experienced teammate.

“I think Citroen wanted to play tactics and then we made our response, but they wanted to play even more, so that’s it,” Latvala said prior to the day's first stage.

A confused Loeb was largely unaware of the chaos and confusion behind him.

“I didn’t know at the start that Ogier will start in front," he explained at stage end.

"I think it shows the limit of the regulations … no sense I think.

"We need to find a solution because we speak too much about the tactics. I know they are part of the game but they are becoming too important and that is not right,” Loeb added. The resulting days and weeks put pressure on the championship organisers to do something about the controversial tactics. 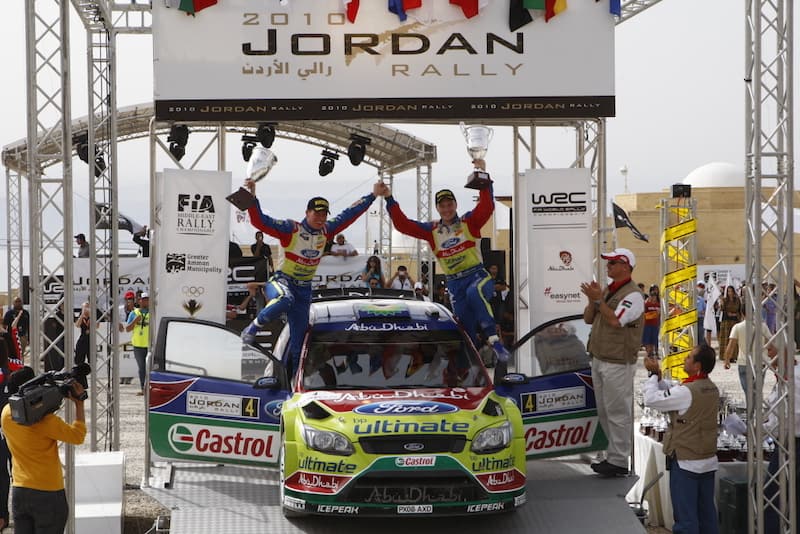 The WRC promoter’s CEO at the time, Simon Long, decided to keep things the same in the short term, despite backlash from fans and drivers that something needed to be done.

He did admit, however, that the rules would change as soon as possible.

“The regulations need to be looked at. As a sport it's confusing to wake up and see the guy you thought was second is now actually sixth,” he said.

“We need clarity to tell a consistent story from the sport. I hope the regulations can be looked at to avoid this kind of thing in the future.”

Loeb was a relative passenger in all the drama, but he wasn't sure he needed the help. “For sure the team strategy made things a bit easier for me, but I’m not sure I really needed it,” said Loeb, who recorded his 56th world rally victory. For Latvala, however, he took the overall result as a positive, tending not to dwell on what might have been.

“This is my third good result in three rallies this season and this run has boosted my confidence. The tactical decisions this morning changed the course of the day. It had a huge effect with Loeb second in the start order," Latvala said.

“The difference between first and second in the order is huge in terms of road cleaning, while second and third or fourth is only marginal. We have to do something because it is confusing the public and that is not good.”

Despite the promise to make a rule change as soon as possible, the road order rules were not changed until 2012. It was then when the WRC introduced a qualifying session on the shakedown test for drivers to choose their start position based on their times in qualifying. Days two and three were changed to reverse classification order, ultimately eliminating any need for team orders midway through an event.   https://www.youtube.com/watch?v=GzSjqoEV964
VIP Exclusive Content
Get full, exclusive access for only $6.55/month.
Subscribe Now
Already have an account? Sign in