Hyundai Motorsport’s Hayden Paddon and co-driver Sebastian Marshall know they must be on the pace from the opening kilometre of Rally Finland this week.


Running 27 to 30 July, Neste Rally Finland is famous for its blisteringly fast gravel roads and massive jumps among summery green forests and lakes with Paddon saying: “We have to be absolutely on it from the start.”

After finishing second to Hyundai team-mate Thierry Neuville at the previous FIA World Rally Championship round in Poland, Paddon says he and Marshall now feel more relaxed and confident as they contest the remaining five rounds of the 2017 season.

“It would be amazing if we could stand on the podium in Finland, but I think there will be 8-10 drivers all capable and trying to do the same thing.” 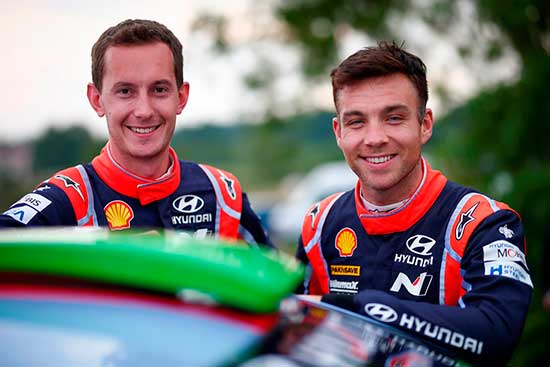 Seb Marshall and Hayden Paddon. (Photo:McKlein)Competing for the eighth time in Finland, Paddon adds: “It’s the one rally I have the most experience on in the world – including rallies in New Zealand, so it always feels very nice returning to a rally I am familiar with. It’s my highlight of the year – fast, flowing stages with many jumps and an incredible atmosphere from all the fans. It’s also the most competitive rally of the year, with small margins and no room for ‘slow stages’ or errors.”

The pair tested in Finland last month. “It was a really successful two-day test. Finland is quite unique in that you can often go searching for the optimum setup, as the smooth wide roads are often quite easy for the car. We made some good steps and hoping that translates on the stages.”

Marshall says: “It'll be my sixth time competing in Finland so it's an event I know well and enjoy. I’m grateful to have experienced it for the first time in a WRC car last year, so I know what to expect. It's tempting to stop reading the notes when the car takes off on the jumps but there’s no time for that!

“The speeds we’re going mean you’ll be late with the next pacenote, so you need to keep reading and brace for landing – the skill is trying not to talk on touch down as this can wind you! The nature of the roads means it is a true rollercoaster and one of, if not the biggest adrenaline rush of the year – what’s not to love?”

Seventh in the WRC drivers’ standings means Paddon starts the Friday leg seventh on the road. “Like always it will depend on the weather. Of course we are hoping for dry weather to make the most of our position, but the Finnish summer can throw all sorts of weather at you.”

Paddon and Marshall compete in the #4 Hyundai i20 coupe world rally car, while Hyundai Motorsport team-mates Thierry Neuville and Nicolas Gilsoul, and Dani Sordo and Mark Marti are in the #5 and #6 Hyundais respectively.

Rally notes
* University town of Jyväskylä is the hub of everything with huge crowds visiting the Paviljonki service park in the centre.
* Thursday evening rally start with the Harju street stage in Jyväskylä.
* A long day for competitors on Friday with almost 16 hours at the wheel as they head west for favourite stages such as Jukojärvi and Urria, before turning east to classics including Laukaa and Lankamaa.
* Saturday routes competitors south to Jämsä and the legendary Ouninpohja – Finland’s signature stage. Same tests as 2016, but mostly driven in the opposite direction.
* Sunday’s finale is a carbon copy of last year, heading south of Jyväskylä and east of Lake Päijänne.