Patrik Sandell makes it three from three in ARA

Subaru Rally Team USA driver Patrik Sandell and co-driver Per Alkmvist made it three wins from three starts in the 2018 American Rally Association (ARA) championship with a faultless drive at the season-ending Tour de Forest Rally.

With both teams piloting identical 2018 Subaru WRX STI rally cars prepared by Vermont SportsCar, Higgins established a slim lead over Sandell early in the rally before being slowed by a mechanical issue which all but sealed Sandell’s path to victory on the treacherously slippery stages of western Washington.

Sandell, a former Junior World Rally Champion, has relished his chance to enter select rounds of the ARA series while focusing on this year’s inaugural Americas Rallycross Championship, where driving for Subaru he recently secured third overall in the ARX Driver’s Championship. Sandell has now taken victory at all three ARA rounds he has entered this year, with victories at the Olympus Rally, Idaho Rally and now the season finale at the Tour de Forest. 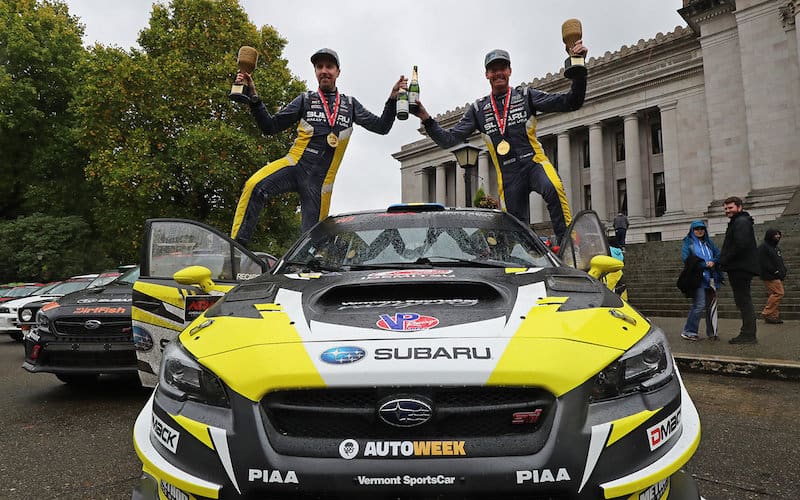 “Three for three! Thank you so much to Subaru for giving me the opportunity to do some rallying this year, it’s been fantastic. The Subaru STI rally car is a joy to drive, even in difficult conditions like we had this weekend,’ explained Sandell at the podium.

“This rally was a big challenge, the roads were so slick and we had a big fight on our hands with Higgins, so I’m happy to come away with the win.”

The Tour De Forest Rally was effectively a new rally for all of this year’s entrants. The event was revived after decades of dormancy, last run as a national championship event in 1983.

Higgins and Drew began the rally on a charge; with the 2018 ARA Driver’s Championship already secured, they could drive flat-out for the event win.

Higgins went fastest on three of the first four stages to earn a slim lead over Sandell at the start of rally.

On the subsequent loop of stages, however, Higgins’ car was hit a turbo problem which reduced power and allowed Sandell and Almqvist to move into the lead.

After repairs Higgins was back on a charge and began to claw back some time from Sandell, but in pushing hard to make up time Higgins and Drew went off the road on stage twelve.

Both were unharmed and their Subaru had minor damage, but the duo were unable to return to the road. Sandell would drive conservatively on the final stages to wrap up the win, with seven stage wins over the event’s fourteen stages.