Portugal beckons for Molly and Coral Taylor, as the Australian family team prepares for their first outing in the World Rally Championship.

Molly, 25, ranked the world’s number one female rally driver, and her mother – a four-time Australian Rally Champion co-driver – will contest the Junior World Rally Championship category of the Vodafone Rally of Portugal, which starts with a super special stage this Thursday.

The pair will have their first run in their new Citroën DS3 R3T later today, (Monday, European time) across a five-kilometre stage about 50km from Faro, the southernmost city in Portugal and capital of the Algarve region where the event is based. Faro is about three hours’ south of the Portuguese capital of Lisbon. 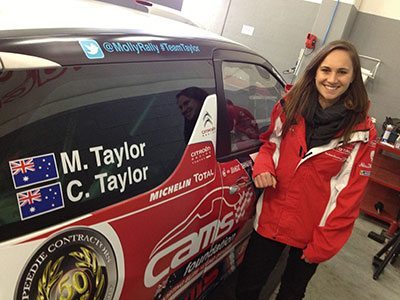 The car is being run by D-Max Racing, a company based near Varese in Northern Italy, that manages motorsport programs across Europe for customers driving Citroën rally cars.

Molly has signed with the team to compete in six rounds of this year’s JWRC, after winning the inaugural Ladies Trophy in last year’s European Rally Championship, in the same model Citroën.

Today is the official WRC privateer test session for this round, so the Taylors will be spending the day with other privateer teams. They are planning to cover about 60km in total.

“This will be the first time I have driven with the Michelin tyres so we want to find a good set-up with these and also try a few different compounds,” Molly says.

“Of course, the other priority is getting a good feeling in the car with the ‘old girl’!” she laughs, with a cheeky reference to her mother.

After today’s test, the pair will head to the Algarve forests for two days of reconnaissance of the stages before final shakedown on Wednesday, and the official start/super special stage in Lisbon on Thursday, April 3.

The JWRC competitors do the full three days of the event (April 4-6), which is made up of 16 stages, covering a total distance of 1394.30km.

This is not the first time Taylor and Taylor have competed together, although Coral is more well known for her role as co-driver for Neal Bates, working with him and Toyota to win four Australian crowns.

She called the corners for her daughter for two rounds of the 2010 Citroën Racing Trophy category of the British Rally Championship (Rally Isle of Man and Ulster Rally) and also for the all-important Pirelli Star Driver Shootout in Spain that year.

That international competition saw Molly win one of six scholarships to the WRC Academy for 2011, a one-make junior development series in the WRC. Portugal was one of the events Molly contested that year.

Regarded as the most technically difficult gravel round in the 13-round WRC series, Rally of Portugal features fast, open roads mixed with narrow tracks and is littered with blind crests, make it hard for crews to find a rhythm. Accurate pace notes are vital as many crests hide corners beyond them.