“I met Possum in 1983, standing outside the railway station in Kuala Lumpur where we were awaiting the ceremonial start of the Rally of Malaysia.

My wife came up and I introduced them and she said:

“So you’re the famous Possum Bourne,” and he replied, “Not yet, but I’m working on it.”

That one-liner, although said in jest, best describes the next 20 years of Possum’s life.

He never lost sight of the goal, only stopping periodically along the way to participate in life’s more pleasant interruptions, like marriage and children. Even then, some would say these things were put on hold if there was a rally to win. 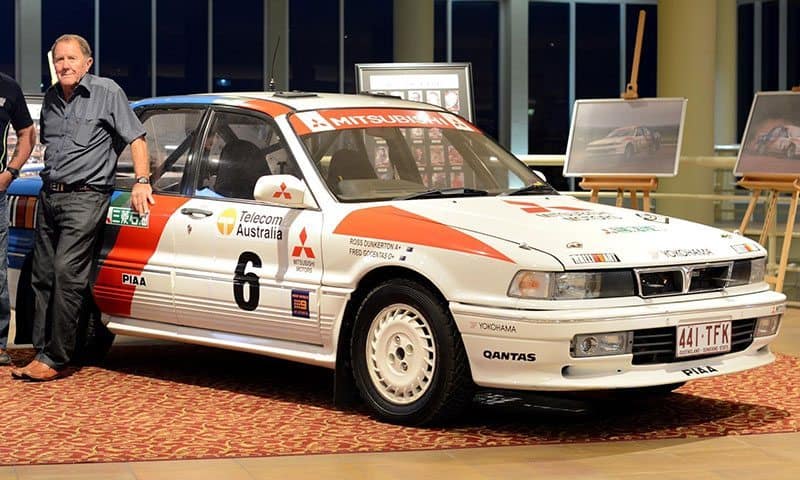 Ross Dunkerton and Possum Bourne were good mates, but arch rivals as well.

When tragedy struck 10 years ago and his business partner, friend and co-driver, Rodger Freeth, died, even that event did not prevent Possum from pursuing his ultimate dream of a full program in the World Championship.

In our early days when we competed against each other in the Asia Pacific area, Possum was a rival and a worthy opponent. When the rally was over we drank and partied together, fished and holidayed together, shared many meals together, celebrated our respective marriages, and then the birth of our children together.

He never got to fulfill his dream of standing on the World Championship winner’s podium, but I prefer to remember him for the things he did, rather than mourn what he didn’t get to do.

On Thursday, April 24, I sat by his hospital bedside and said my goodbyes.

They say simply that Possum need not be idealised in death beyond what he was in life. Rather, he should be remembered as a simple and decent man who had an extraordinary talent.”

“Possum was the greatest, loving father and our hero,” Peggy Bourne said after the death of her husband and her children’s father.

“To say the children and I will miss him is a vast understatement. He was the love of my life and the greatest loving father to our children. I cannot even begin to describe how devastating this has been on us.”

Peggy Bourne, a Zambian-born American, met Possum on a trip to Africa in 1988, marrying not long after. She described her husband as the most loving, genuine, fair, down-to-earth, competitive and amazing man.

“He was our world. He will always be my Poss, daddy to the children, Peter to his mum, big brother to the rest of his family, a great mate to all his friends, an enthusiastic competitor, rival and mentor to his colleagues in the rallying community, with a personality that transcended all boundaries.”

She said she and her family had shared Possum with a nation for as long as she’d known him, and now the nation was sharing her grief.

“I hope Possum will remain the legend he has become so that his children will know what a great guy he was to all of us,” she added.